A man who had a five-inch ‘dragon horn’ sticking out of his back needed it removed when it turned out to be cancerous.

The 50-year-old labourer, who has not been identified, had ignored the growth for three years, doctors revealed.

The bizarre lump turned out to be a giant cutaneous horn (CH), a build-up of keratin – the same protein that forms hair, skin and nails.

Tests revealed the horn was the result of a cancer called a squamous cell carcinoma (SCC). It would have started as a small and crusty raised area of skin.

SCCs usually begin on areas exposed to the sun – but the man said he was not a sun-worshipper and had no family history of skin cancer.

The horn was removed from the patient’s back and the gaping hole left behind was reconstructed with a skin graft from his thigh. 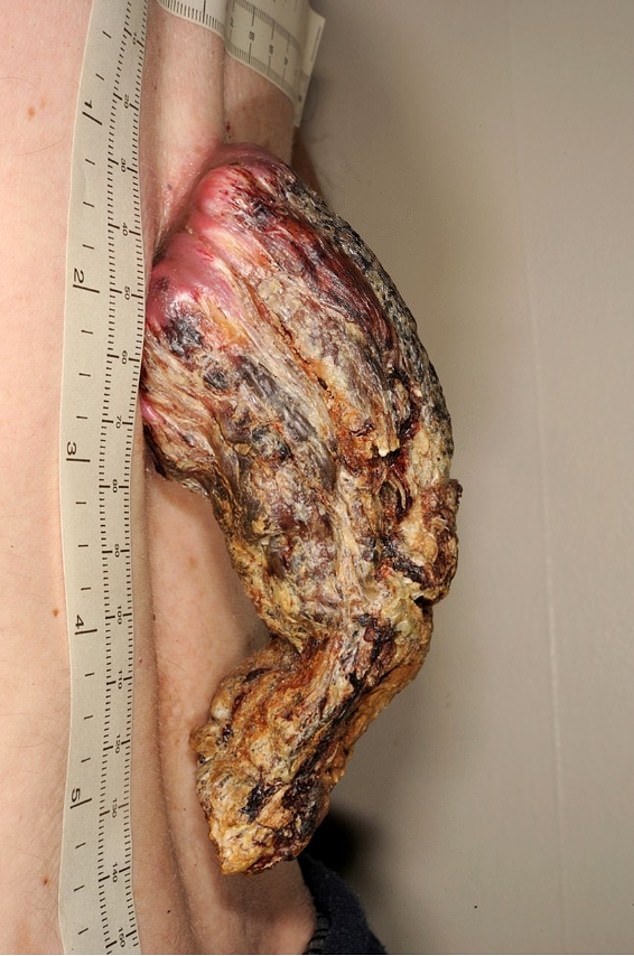 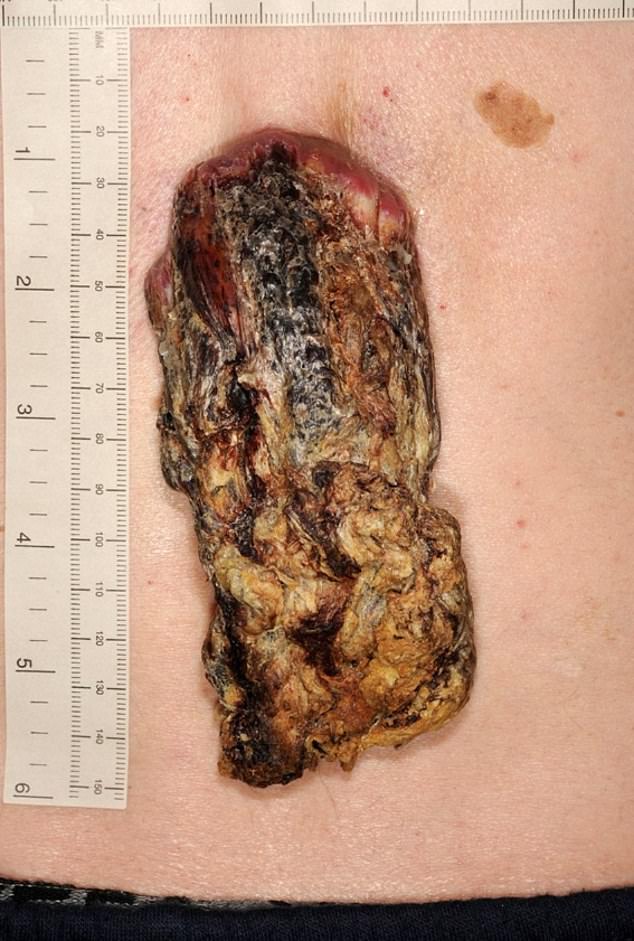 The ‘dragon horn’ was removed from the patient’s back and the gaping hole below was reconstructed with a skin graft from his thigh, doctors in Chester revealed

The doctors at Countess of Chester Hospital said the man had barely any risk factors for developing skin cancer.

They said SCCs this large can simply ‘slip through the net’, despite public awareness of skin cancer.

Writing in the British Medical Journal Case Reports, the team of doctors described it as a ‘dragon horn’.

They wrote: ‘We report a rare case of an extremely large well-differentiated SCC that was neglected by a patient living in a developed country with access to free healthcare.

‘This highlights that despite current public skin cancer awareness and rigorous healthcare measures, cases like this can still arise and slip through the net.’

The man had a three-year history of a growing lump on his back, wrote Dr Agata Marta Plonczak and colleagues.

A test confirmed a squamous cell carcinoma at the base of the horn, which caused the horn to grow.

They were shocked to discover the man’s cancer hadn’t spread to other parts of his body, considering he had never received treatment.

SCCs can vary in their appearance, but most appear as a scaly or crusty raised area of skin which may be red and inflamed.

They can be sore or tender and they can bleed but this is not always the case. Most cases are diagnosed and treated early before becoming ‘dragon horns’.

SCC can occur on any part of the body, but they are more common on sun exposed sites such as the head, ears, neck and back of the hands.

A SCC is a type of non-melanoma skin cancer (NMSC) caused by changes in the DNA cells, such as a burn. They rarely spread and are curable, according to Cancer Research UK.

It is the second most common skin cancer in the UK, after melanoma, accounting for 23 per cent of all 100,000 NMSC cases diagnosed each year.

An estimated three million Americans are affected by NMSC a year, which includes basal cell carcinoma and squamous cell carcinoma.

It is not clear why skin cancer can turn into a horn, or how often it happens. Around 20 per cent of horns have a cancerous base.

The horn is hard and yellowish-brown in colour, and mainly appear on the face or ears.

They do not normally grow to a giant size before a patient seeks medical attention.

WHAT IS A CUTANEOUS HORN?

Cutaneous horns (CH) occur due to a build-up of keratin, the same protein that forms hair, skin and nails.

CHs’ prevalence is unknown, however, they are more common in older adults, with 60-to-70 year olds being most affected.

The growths – which can be cancerous – also tend to occur in people with fairer skin, dermatologists say.

The cause of CHs is currently unknown, but scientists have previously found links to radiation and UV exposure.

Around half of CHs have a benign base, with the remainder being malignant or pre-malignant, according to DermNet New Zealand.

The underlying lesion is often seborrheic keratosis, which is one of the most common non-cancerous skin growths in older people.

Other causes can include viral warts, squamous cell carcinoma or the scaly growth actinic keratosis, which occurs due to overexposure to UV radiation.

CHs can be straight or curved and tend to be hard and yellow-brown in colour. They can be surrounded by normal or thickened skin.

The side of the horn can be ridged, while the base may be flat or protruding.

Treatment focuses on removing the CH. The surrounding skin may also be excised depending on the nature of the lesion.