A jungle-loving tour guide has been left with a huge ring-shaped scar on his buttock after being bitten by a venomous spider on the night he got engaged.

Jérémy Schalkwijk, from Barberton, South Africa, was staying in a national park with his now-fiancée, Athina Yalias, when he was bitten on the backside while in bed.

At first the 33-year-old thought he had been stung by a wasp but after a few days the flesh around the bite started to rot and he was in agony.

When he went to hospital he was rushed into surgery and medics cut out a two-inch (5cm) wide chunk of skin and tissue and repaired it with a graft from his leg.

Mr Schalkwijk is so fond of the outdoors that his in-laws dub him ‘Tarzan’, which he now says he should have taken as a warning.

And he joked that, because the couple conceived their first child on the same night, they fear Ms Yalias will give birth to a ‘spider boy’. 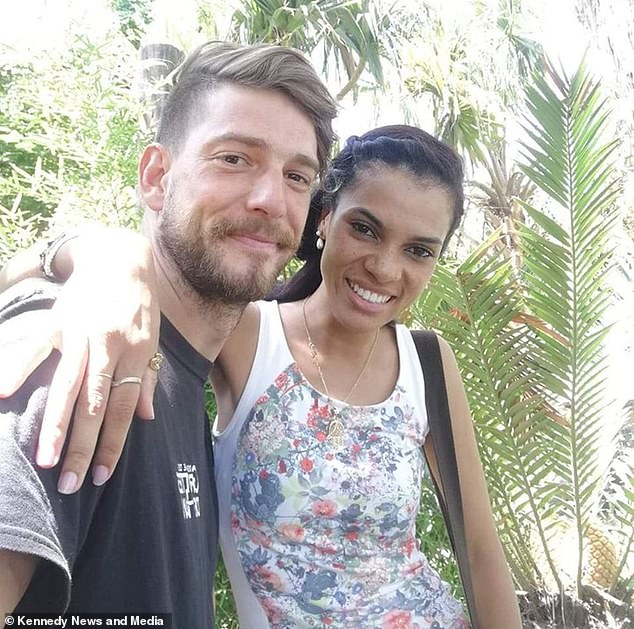 Jérémy Schalkwijk, pictured with his fiancée, Athina Yalias, was bitten on his backside by a violin spider while staying in Kruger National Park in South Africa 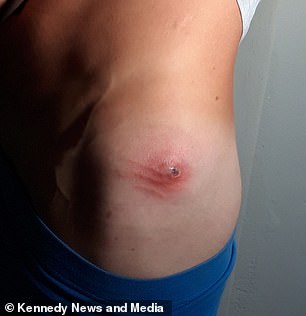 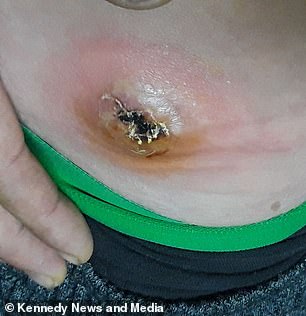 Mr Schalkwijk at first thought the bite (left, after one day) was a wasp sting but he soon realised it was a bite from a spider which had crept into his bed in the night. The tissue around the bite started to rot and became extremely painful (right, after three days)

The couple had been on a sunset walk through the bush in Kruger National Park, on the border with Mozambique, when Mr Schalkwijk popped the question in May.

When he was in bed later that night he felt a sharp sting on his buttock and thought he’d been stung by a wasp.

Over the next three days he became unable to sit down properly because the bite was seeping pus and turning black and excruciating.

Examining the injury closer, he realised it was not a wasp sting but a bite – from a venomous violin spider that had crept in next to him and his sleeping fiancée.

Rushing to hospital, Mr Schalkwijk was met by medics who cut away the flesh and mechanically sucked out the infection, leaving him with a gaping hole in his bum.

‘The bite was like burning under the skin,’ he said. ‘The pain was initially like a bee sting, then a wasp sting and finally, a scorpion sting.

‘It was on my bum and I couldn’t put any weight on that side. [After four days] I couldn’t move anymore, so that’s when I decided to go to the hospital.

‘By then I knew it was actually a violin spider bite.

‘Athina’s family called me Tarzan because I’m always barefoot and love the bush, but now I realise I should have taken this more seriously.

‘They laughed when I told them the story of the bite because they already called me Tarzan. Now they are scared that she will give birth to a spider boy.’

After being left with a scar to mark the most important night of his life, Mr Schalkwijk and Ms Yalias joked the wound looked just like an engagement ring.

Mr Schalkwijk said: ‘I’ll have the scar forever – there’s no doubt about it. It’ll be a nice story to tell on our wedding day.

‘I joked with Athina that the scar left behind looks like an engagement ring. It’s healed but there’s a big circle there now. 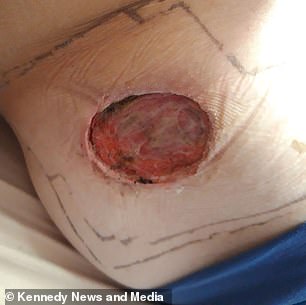 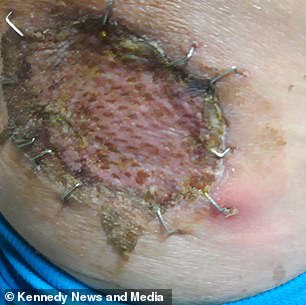 Mr Schalkwijk had a large chunk of skin and flesh cut out of his buttock (pictured left) to get rid of the tissue which was being destroyed by spider venom. He then had skin grafted from his leg to heal the wound left by the surgery (right)

Now healed, the wound has left a huge ring-shaped scar as a permanent reminder of the unfortunate event on the day Mr Schalkwijk got engaged

WHAT IS A VIOLIN SPIDER AND HOW DANGEROUS IS IT?

Violin spiders are venomous spiders found throughout South Africa which can, and do, bite people.

They don’t make webs but live under rocks and logs or in caves.

They are brown or grey and have spots on their abdomen – they look like chunkier versions of ‘daddy long legs’. They measure up to 1.6inches (4cm) across.

While violin spiders may stray into people’s homes or garages they usually run away from people.

Their venom is toxic to people and can destroy the flesh around a bite and cause it to go black, die or get infected. Bites should be treated in the same way as open wounds.

If a bite becomes infected the patient should seek hospital treatment and get antibiotics.

Mr Schalkwijk had whisked Ms Yalias away to pop the question six months after meeting her on Tinder.

But just days into their getaway, part of Mr Schalkwijk’s behind became infected.

He said: ‘As I’m a guide and I love the bush, I thought it would be a good idea to do the proposal there.

‘I knew it would be a memorable night, but I didn’t know I’d be left scarred after it.

‘We spent the day in the Kruger then after the meal on the way back to the lodge, I asked her if she wanted to marry me when there was a sunset.

‘I hired a nice room in a nice lodge, but it seems somewhere in there there was a violin spider that decided to bite me. It took me two days to realise there was something wrong [with the wound].

‘I’d had African tick-bite fever before and it goes right along the bite. It was very similar and I didn’t stress too much, but said if it got worse I’d get some antibiotics and it’d be sorted.’

He said that by the fourth day after being bitten his wound had turned ‘very nasty’ and wasn’t getting any better.

Mr Schalkwijk said: ‘I went to the clinic which was the closest and they said I should have gone earlier, there was a bit of infection and they told me to take some antibiotics and painkillers. 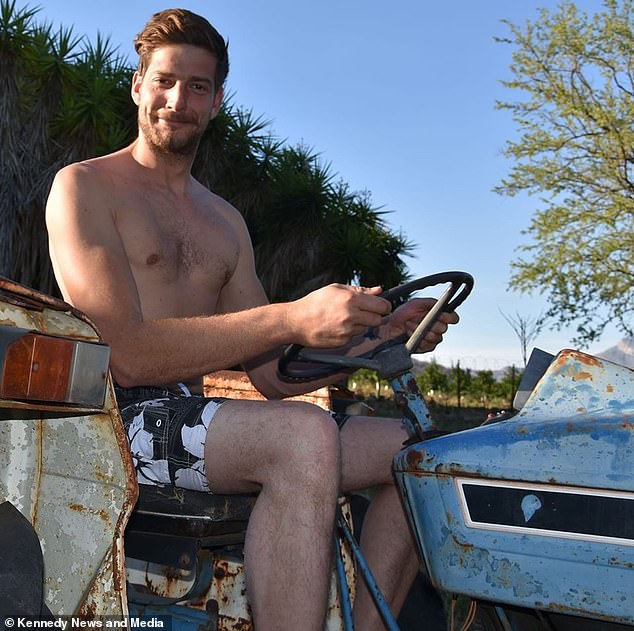 Mr Schalkwijk said he’d had tick-bite fever before and this experience felt similar, but by the fourth day it had ‘turned very nasty and didn’t get better’ 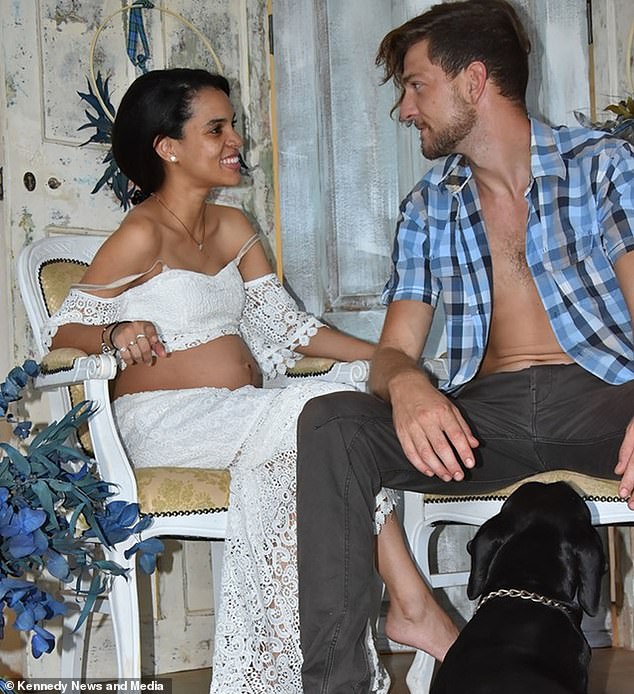 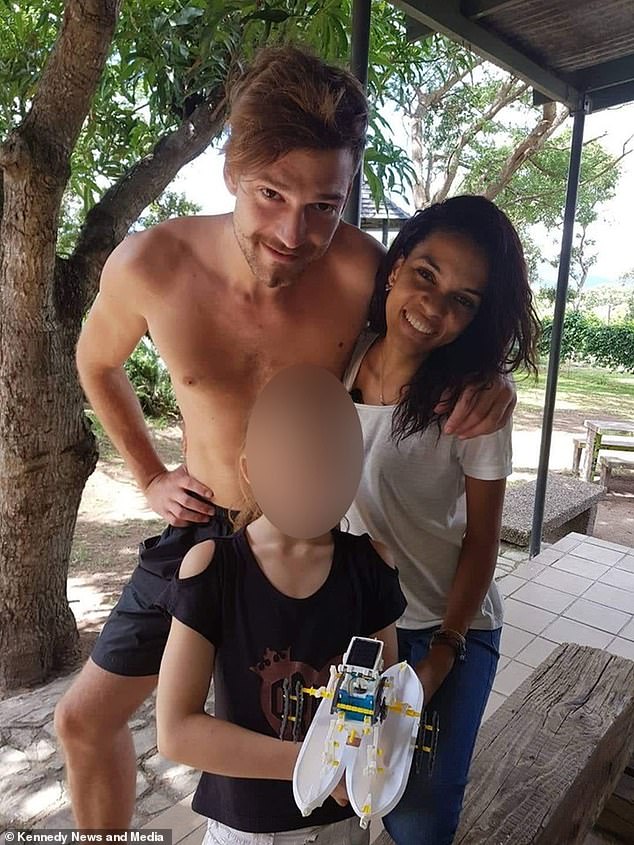 ‘Athina’s family called me Tarzan because I’m always barefoot and love the bush, but now I realise I should have taken this more seriously,’ Mr Schalkwijk said

‘Then it got worse and worse. I went to a private hospital and they had to cut the whole infection out in theatre.

‘The hole was 0.5cm deep and 5cm in diameter. It was quite impressive. Luckily for me it was on my bum, so I had some fat which stopped the muscle going necrotic.’

After five weeks using a wound VAC machine to suck out pus and fluid, Mr Schalkwijk then had further surgery to have a skin graft.

Surgeons took a large square of skin from his thigh then transferred it to his bottom.

Mr Schalkwijk said: ‘It took a long, long time to heal. I had a negative-pressure machine [wound VAC] which helped.

‘At the beginning it was draining all the pus in the wound, then it helped the healing.

‘After five-and-a-half weeks with that machine, they decided to do a skin graft.

‘They took some skin out of my thigh and put it back on my bum. It took five days at the clinic and two weeks at home resting and without showering.

‘Luckily Athina said yes when I proposed and she’s going to give birth in nine weeks, exactly nine months after that night.’