How two apples a day keep cholesterol at bay: A brace of the fruit daily for eight weeks can lower ‘bad’ cholesterol by up to four per cent, study finds

An apple a day keeps the doctor away, but two might be better, a study suggests.

When 40 people with slightly high cholesterol ate two large apples a day for eight weeks, it lowered their levels of ‘bad’ cholesterol by almost four per cent. 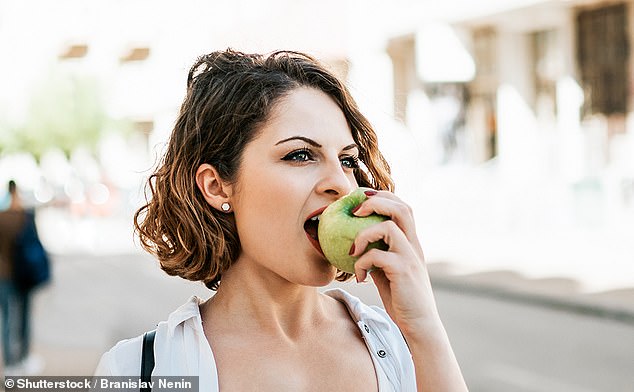 That could help to reduce their risk of a stroke or heart attack, which can be caused by cholesterol hardening the arteries.

Two large apples, costing less than £1 a day, contain about a quarter of someone’s recommended daily fibre, and a type of fibre that fuels bacteria in the gut which may reduce cholesterol.

This could explain the traditional advice that ‘an apple a day keeps the doctor away’.

Researchers also found people had healthier, more relaxed blood vessels after eating apples daily, which is similar to an effect seen in other foods containing natural compounds called polyphenols, such as red wine and tea.

Professor Julie Lovegrove, senior author of the study from the Hugh Sinclair Unit of Human Nutrition at the University of Reading, said: ‘It seems the old adage of an apple day was nearly right. 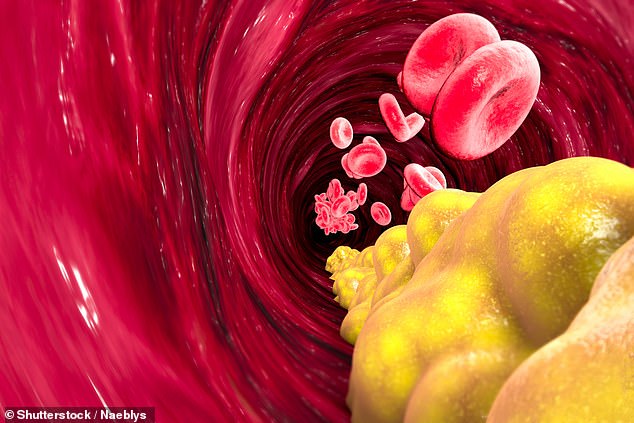 When 40 people with slightly high cholesterol ate two large apples a day for eight weeks, it lowered their levels of ‘bad’ cholesterol by almost four per cent [File photo]

‘People who ate daily two large apples high in polyphenols had lower LDL cholesterol, also known as ‘bad’ cholesterol, and no reduction in good cholesterol compared to people having an apple-based drink.

‘We believe the fibre and polyphenols in apples are important, and apples are a popular fruit among all ages, which are easy to eat and make great snack foods.’ The study asked people aged 20 to 69 to eat two apples a day for two months, taking blood tests before and afterwards.

The results were compared to the same people drinking two glasses a day of an apple-based drink containing the same amount of calories over the same period.

After eating the apples, people’s ‘bad’ cholesterol was an average of 3.6 per cent lower than following the apple drink regime.

While this falls far short of the effect from taking statins, the drugs which typically reduce cholesterol by 30 to 55 per cent, this small dietary change may still help to reduce people’s risk of cardiovascular disease.

Experts believe a type of fibre found in apples fuels important gut bacteria to produce short-chain fatty acids which may lower the liver’s production of cholesterol.

These gut bugs may also change the form of bile salts, which contain cholesterol, so that higher amounts of it are passed out of the body.

This is important because high cholesterol in the blood can block and harden arteries, raising the risk of a heart attack or stroke. 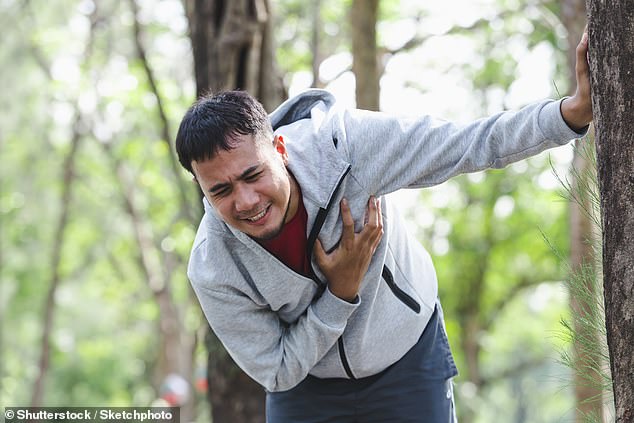 Two large apples, costing less than £1 a day, contain about a quarter of someone’s recommended daily fibre, and a type of fibre that fuels bacteria in the gut which may reduce cholesterol [File photo]

The variety of green apples given to people in the study, called Renetta Canada apples, are especially high in polyphenols, which are compounds found in many fruits and vegetables, but researchers believe effects could be seen from other apples.

The polyphenols may explain why after eating two large apples a day, people had slightly but significantly more relaxed blood vessels under their skin.

This is believed to show their blood vessels are less stiff and prone to high blood pressure, which increases the risk of cardiovascular events like a heart attack or stroke.

The study, published in the American Journal of Clinical Nutrition, found that women may benefit more than men from two apples a day when it comes to cholesterol, although more studies are needed to confirm this.

Tim Chico, professor of cardiovascular medicine at University of Sheffield, said: ‘This study did show that eating two apples a day led to a slight reduction in cholesterol compared with an apple drink.

‘The effect on cholesterol was very small compared with drug therapy with statins, and so it is not clear whether this effect would lead to a decrease in heart disease or stroke.

‘However, the study was over a short period and any benefits are likely to accumulate over a lifetime of a healthy diet.’