Fisherman, 31, escapes death after his leg was mauled by a CROCODILE that snuck up on him from behind while he was wading in a lake at night

A man who went fishing in a Zimbabwean lake at night had his leg torn to pieces by a crocodile.

The 31-year-old, who wasn’t identified, was attacked from behind by the giant reptile, which can grow to 20 feet (6m) long.

He suffered ‘significant tissue loss’ from a ‘ragged’ and ‘irregular’ wound on his right leg, during a five minute struggle with the beast.

The fisher also had one of his fingers bitten in half as he tried to defend himself – but only rated his pain an eight out of 10 when asked by doctors.

It took five hours for the man to reach a hospital and then doctors had to improvise to operate and cut off the damaged flesh while he was still awake. He has since recovered and had a skin graft to fix his wound. 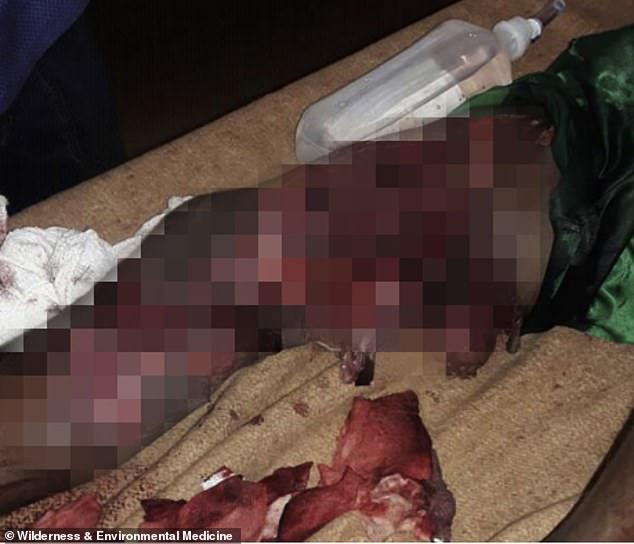 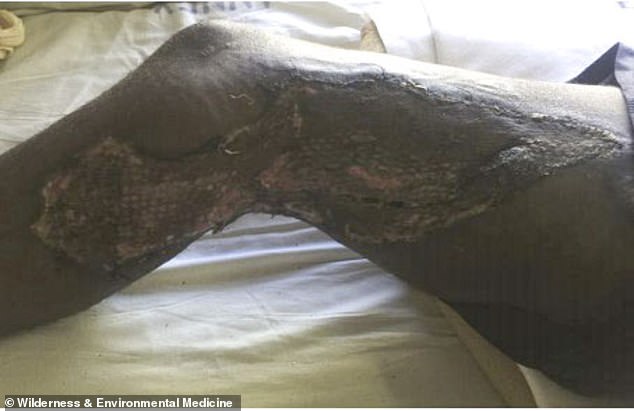 A skin graft was done to repair the hole where the crocodile bit through the man’s leg and he regained the use of the limb after recovering in hospital. Doctors did not reveal where the skin grafted from

Doctors at the Parirenyatwa Hospital in Harare, Zimbabwe’s capital city, treated the man.

He told them he had been stood in knee-deep water at the shore of Lake Chivero, a 22-mile (35km) drive away from the city, while he was trying to catch fish at 11pm.

He was with one other person on the night-time trip when he was attacked by a Nile crocodile.

The carnivore mainly feeds on fish but will go for whatever it can find, which could include zebras, hippos, birds or even other crocodiles.

Hundreds of people are thought to be killed by the animals every year.

The Zimbabwean medics, led by Dr Dennis Mazingi, wrote in their case report: ‘The crocodile had approached him from behind and lunged forward, biting his right thigh.

‘He held the snout of the crocodile and attempted to open its jaws while his companion made noises in an attempt to distract the animal.

‘He was eventually released by the retreating crocodile after a three- to five-minute struggle.

‘His companion called for help, and he was taken by boat to the National Parks office and from there to a district hospital, after which he was transferred to our institution.’

The team said the man had a ‘large leg laceration with ragged edges’ and they could see his arteries, but he did not appear to be losing huge amounts of blood. 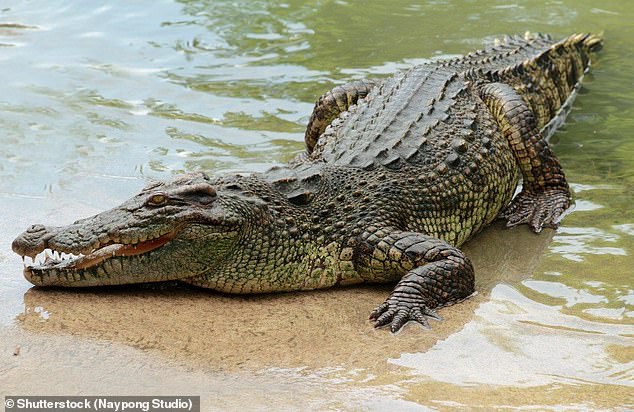 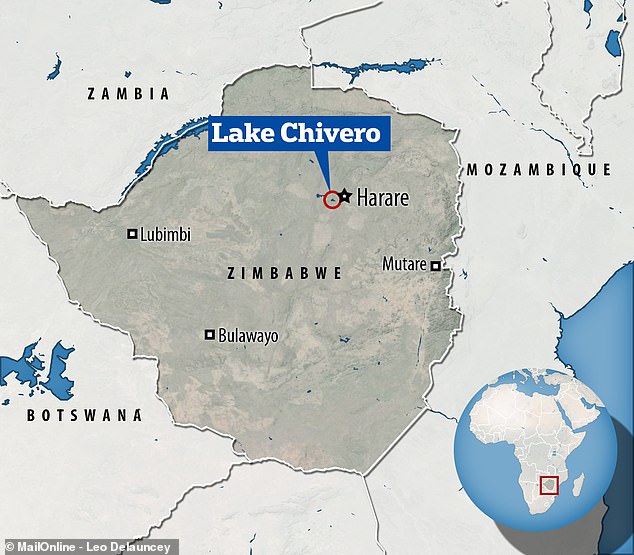 The man was standing in knee-deep water in Lake Chivero, 22 miles from Harare, when he was attacked by the crocodile. He was taken to the national park office by boat before going to hospital

He also had ‘defensive wounds’ on both of his hands and the middle finger on his right hand had the end bitten off.

He rated his pain an eight out of 10 so doctors gave him painkillers and used a spinal nerve block to numb his leg, allowing them to cut off the destroyed flesh.

General anaesthetic and an operating theatre would have been preferred, the doctors said, but there wasn’t a room available so they used local anaesthetic only – and said it was quick, safe, and potentially even better because they used fewer painkillers.

By the time the man finally had surgery he was at serious risk of infection from the ‘unusual organisms that may be present in crocodile bite wounds’, the doctors said. 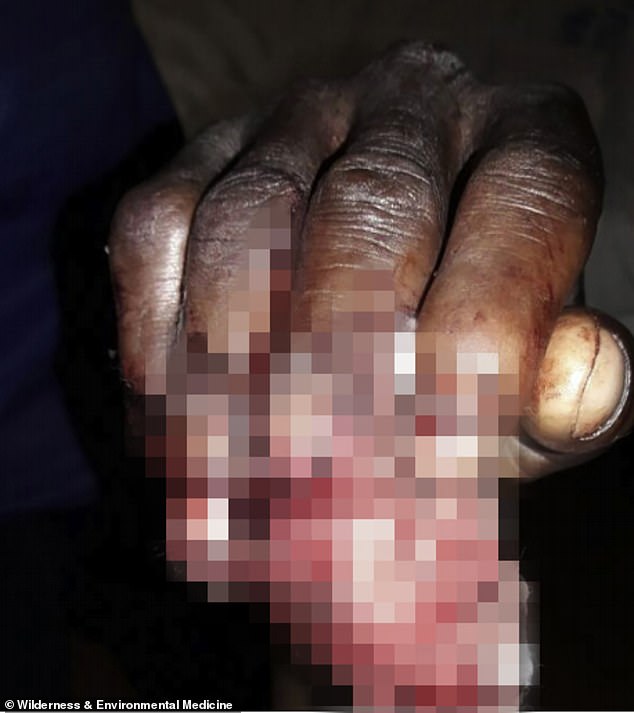 By then it had been 19 hours since the man was bitten.

The man had ongoing treatment including antibiotics and a skin graft to repair the wound on his leg (doctors did not reveal where the skin was grafted from).

Dr Mazingi and his colleagues added: ‘The patient was doing well after discharge on review.’

The case was published in the journal Wilderness and Environmental Medicine.

An Australian park ranger remarkably survived being attacked by a nine-foot-long (2.8m) crocodile after it ripped the flesh off his thigh, arm and hand.

Craig Dickmann, 54, was fishing alone at Captain Billy Landing, about 560miles (900km) north of Cairns, when a saltwater crocodile jumped towards him with bared teeth.

‘That noise will haunt me forever – the snap of its jaws – it was quicker than your mind can register,’ he told the Courier Mail.

‘These [crocs] are bulletproof, there’s no weakness.’ 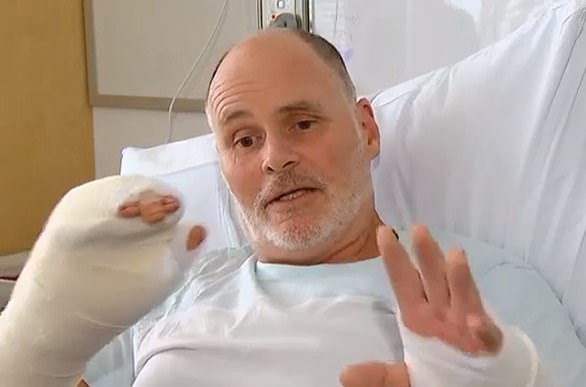 Craig Dickmann, was mauled by a nine foot (2.8m) crocodile

He persistently dug his fingers into its skull until it released him and he was able to pin the beast down.

Mr Dickmann was driven 50miles (80km) to an airstrip where he was picked up by the Royal Flying Doctor Service and flown to Cairns Hospital, where he is being treated.

He said the crocodile stripped his skin so close to the bone it revealed his limbs’ layers.

‘I remember looking at [my hand] later on and seeing how it looked like when you peel back the flesh, when they do those diagrams in anatomy textbooks,’ the Queenslander said.

He flung it away by its snout before escaping back to his car.

Mr Dickmann applied a pressure bandage to his gushing hand and drove over an hour back to the ranger station where he was able to call a colleague who provided medical assistance two hours after the first bite.

He can still use his mauled hand and the bite narrowly missed the femoral artery in his thigh.