Eczema-suffering mother, 36, claims going VEGAN healed her flaky skin ‘which was caused by powerful steroids and made her go into hiding’

An eczema-stricken mother claims going vegan healed her flaky skin which was caused by steroids and made her go into hiding.

Jennifer Pierce, 36, was too embarrassed to leave her house after a severe flare-up when she gave birth to her first child, Pixley, now four.

For a decade, steroid creams had managed to keep her condition under control but the powerful drugs slowly stopped working.

She believed her skin had become immune to her steroid creams, so she stopped using them all together in October 2016.

But she began to suffer from flaky skin, severe itching and even hair loss as a result of giving up the drugs – known as topical steroid withdrawal (TSW).

Mrs Pierce, from Los Angeles, claims her doctor recommended she cut out foods including dairy, eggs, and gluten to test whether they would help.

She turned vegan months later in March 2017, which she claims helped her fight off her eczema. Mrs Pierce is still vegan two-and-a-half years later and does not suffer any symptoms of eczema.

Mrs Pierce also avoided washing for four weeks as part of the unproven ‘no moisture therapy’.

It’s based on the theory that drying the skin out, by avoiding showers or baths and moisturising, helps the skin produce its own moisture, therefore healing itself. 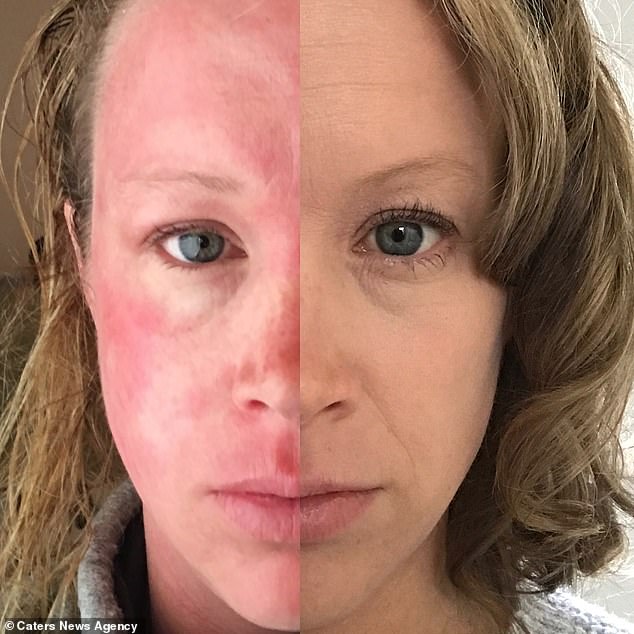 Jennifer Pierce, 36, whose eczema was so severe she ‘went into hiding’ claims to have reversed her condition with a vegan diet (pictured before and after the change in her diet) 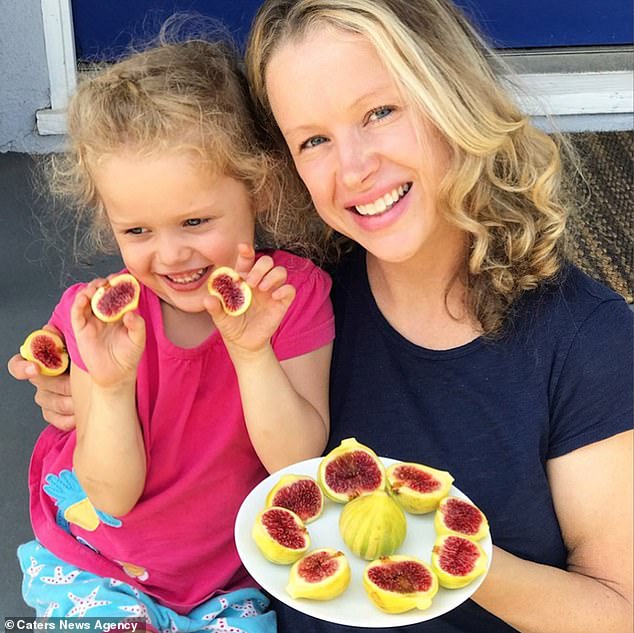 Mrs Pierce, from Los Angeles, was suffering from severe eczema during pregnancy and after the birth of her first child, Pixley, now four 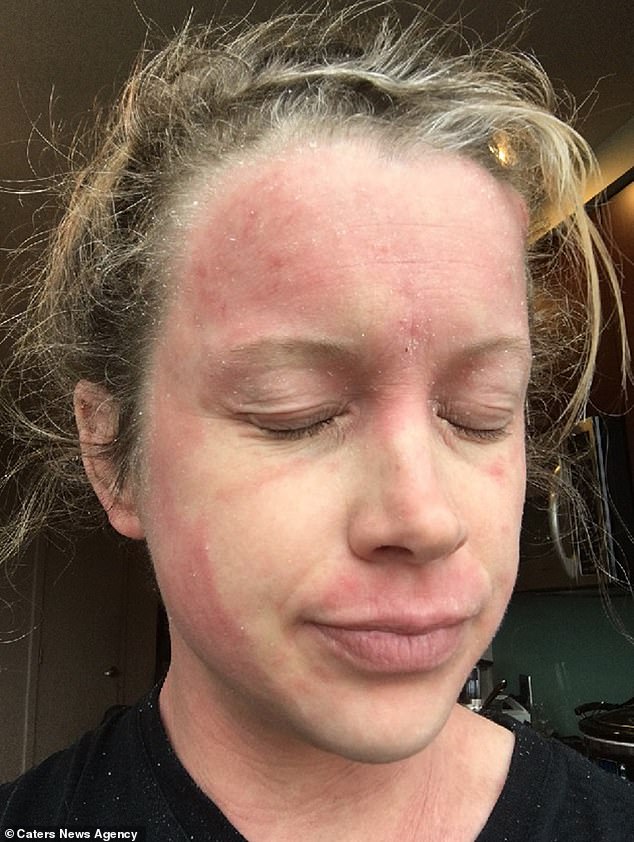 Mrs Pierce stopped using steroid creams in October 2017. She is pictured at this time 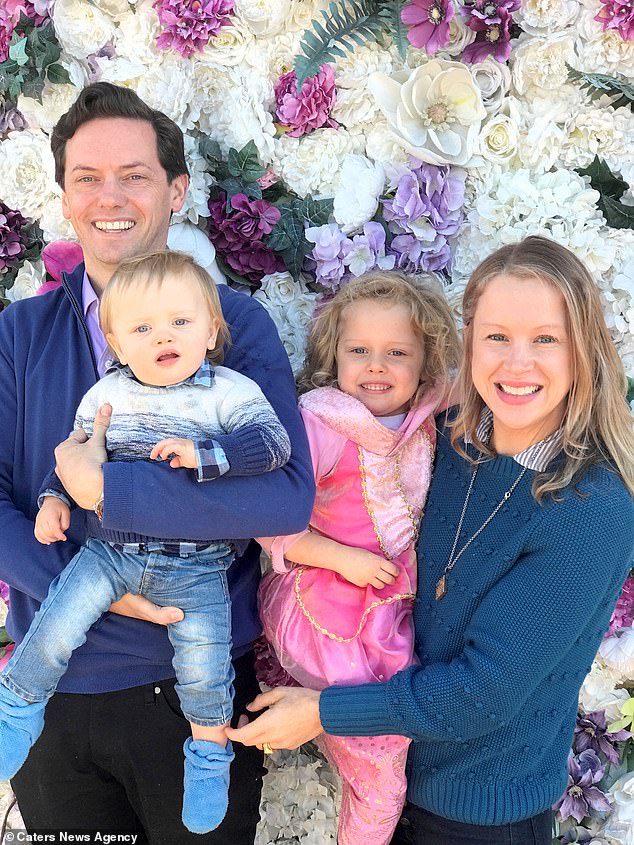 Mrs Pierce, who also has a son called Westley with her partner, Lucas (both pictured), said she ‘went into hiding’ because she was so embarrassed about her skin

Mrs Pierce said: ‘I went into hiding because I felt so embarrassed about my appearance – my skin was red, flaky, cracked and bleeding.

‘My doctor recommended a complete elimination diet where I cut out the top foods related to allergies and then slowly reintroduce after 30 days – I cut out dairy, eggs, and gluten first.

‘I didn’t even know food could be a culprit. Quitting all moisturisers combined with my diet change was a massive turning point for my skin.

‘Pixley started to get eczema at 18 months old so I swapped her diet to plant-based too – her skin is much better too.’

Eczema is a complex and incurable skin condition. Its cause is not fully understood and sufferers may never find out the triggers behind their flare-ups.

Having both eczema and food allergies is common, and the NHS says some foods, such as eggs and cows’ milk, can trigger eczema symptoms in some people.

It can be difficult to pinpoint what foods trigger eczema, particularly if there is a delay in symptoms. 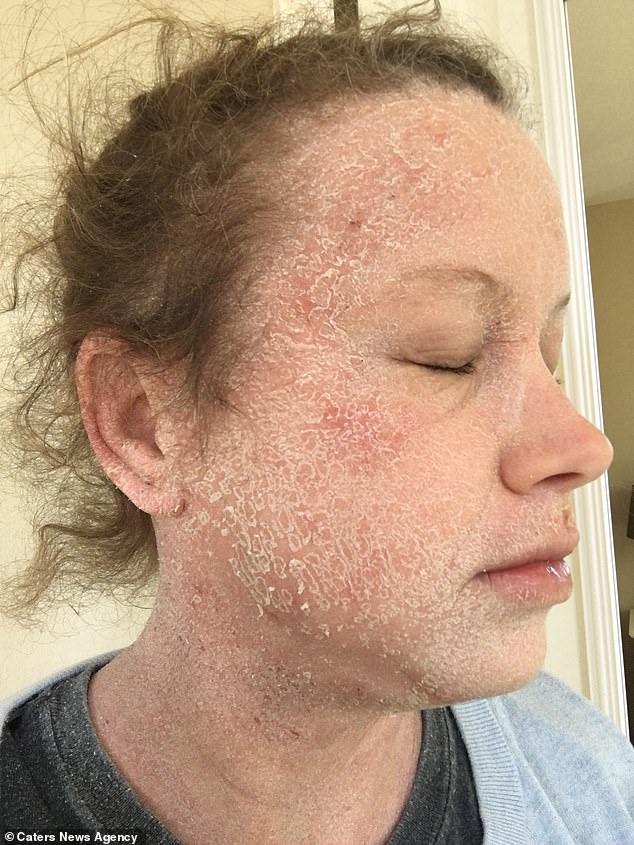 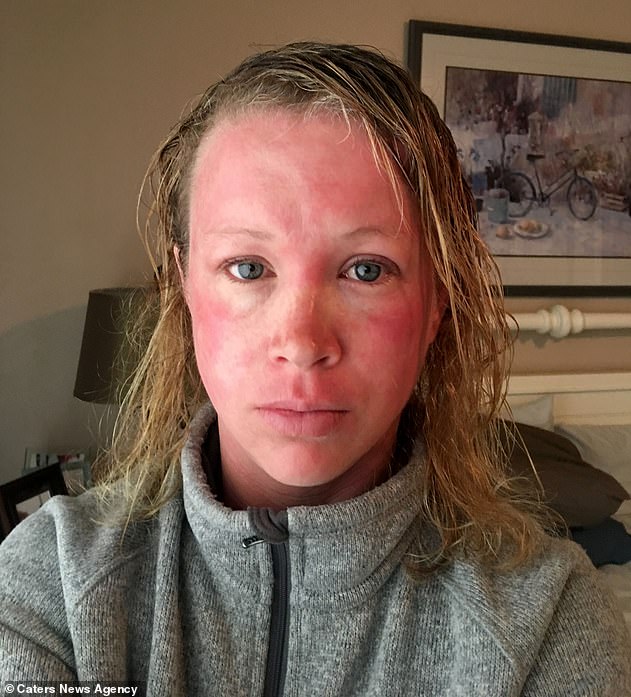 Mrs Pierce claims her doctor recommended she cut out the top foods related to allergies, including dairy, eggs, and gluten. She is pictured around this time 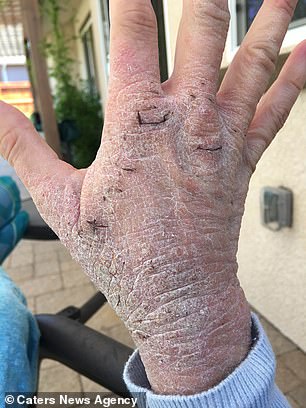 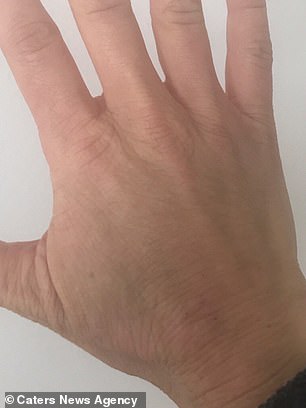 DIET BEFORE AND AFTER

There is debate about whether dietary changes can improve eczema symptoms – but it certainly will not ‘cure’ it. Experts don’t recommend excluding foods without advice from a doctor.

Mrs Pierce started using steroid creams at the age of 25 to help clear her eczema. She had first had signs of the condition aged seven but it was never severe.

She said her skin quickly became ‘addicted’ to the creams – known as topical steroid addiction. Eczema can gradually become uncontrollable and difficult to treat.

Mrs Pierce, who also has a son called Westley with her partner, Lucas, said: ‘I was never made aware by doctors about the risk of becoming addicted.

‘But everything changed when I fell pregnant with Pixley.’

Pregnancy can sometimes trigger changes in skin, leading to a new diagnosis of eczema or flare-ups in existing sufferers. 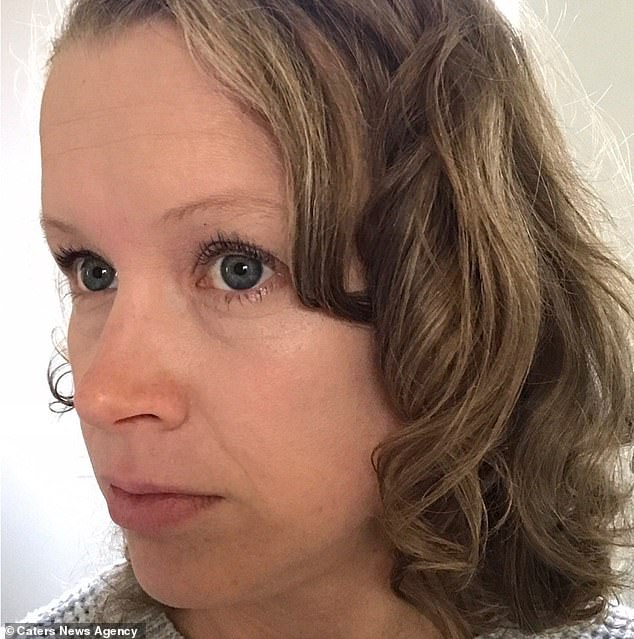 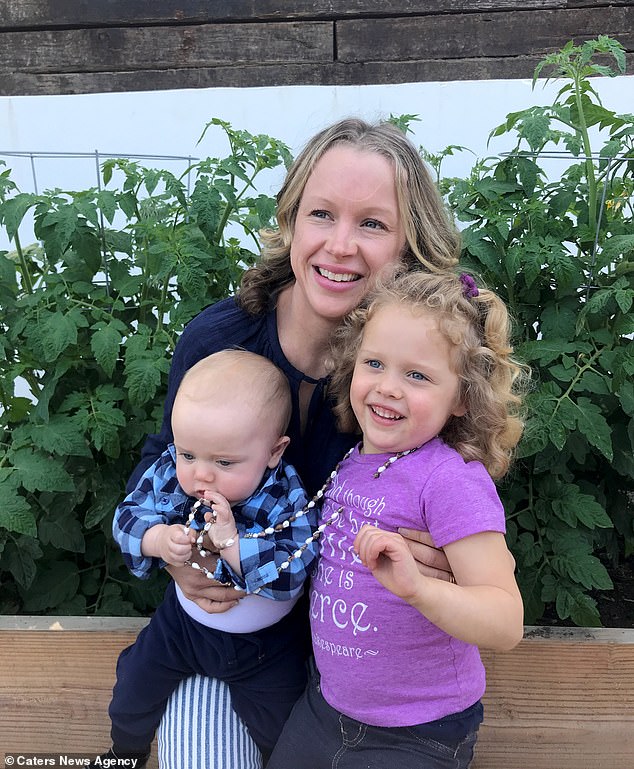 Mrs Pierce said: ‘My skin cleared for the duration of my pregnancy but after giving birth I suffered with horrible flare ups and I was covered head to toe with eczema’ 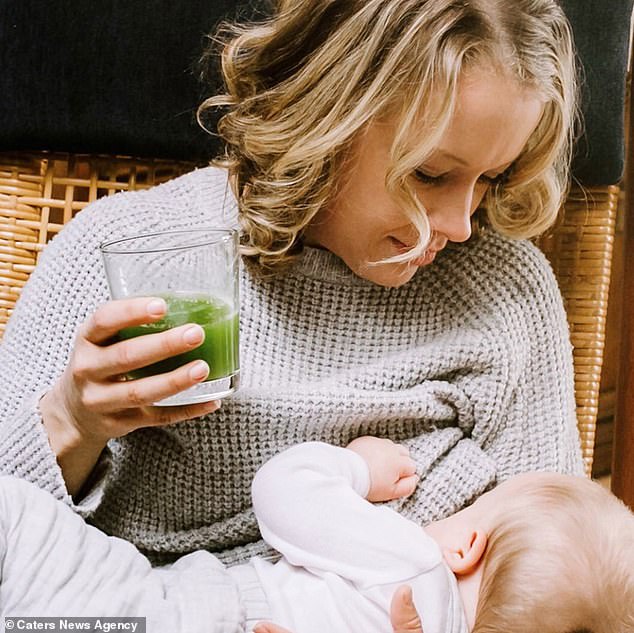 The former senior product manager, pictured with her son, Westley, slowly saw her skin become clearer and has led a vegan diet ever since February 2016

Jennifer Pierce said a turning point for her skin was turning vegan.

There isn’t any conclusive evidence to show a strong connection between a vegan diet and a cure to eczema.

However, some anecdotal stories show people’s skin clearing after taking up a plant-based diet.

The NHS also say there are some allergenic foods, such as eggs and cow’s milk, both of which are not eaten by vegans, that can trigger eczema.

Dr Adil Sheraz, consultant dermatologist and British Skin Foundation spokesperson, agreed there is a link between eczema and food, but not specifically a vegan diet.

He said: ‘Eczema is a complex disease and genetics play a major role in its development.

‘There are certain foods that exacerbate eczema in some patients; this will vary from person to person.

‘It is important not to shun patients’ experiences of what works for them however when treating vast numbers of patients with eczema, as physicians we need to rely on clinical experience and evidence based research and not anecdotal evidence.’

Mrs Pierce said she was given a strong steroid cream during her pregnancy. But after the birth of Pixley, her eczema came back with vengeance.

She said: ‘My skin cleared for the duration of my pregnancy but after giving birth I suffered with horrible flare ups and I was covered head to toe with eczema.

‘Around the same time, I decided to quit my job at Amazon so I can stay at home with my daughter – I no longer had the medical insurance to pay for the cream.

‘A couple of days later, my body went into topical steroid withdrawal, but I didn’t know what was happening – I was scared.’

TSW is thought to occur when steroids have been abruptly discontinued after a prolonged or inappropriate length of administration.

There is debate among medics about whether TSW or topical steroid addiction is ‘real’, or whether it is because people are not using their steroid creams properly.

Mrs Pierce said: ‘My face was red and swollen and my whole body was suffering with burning skin and a constant bone deep itch.’

Mrs Pierce said she tried a strong steroid cream one more time before ditching them completely because they weren’t helping.

She said: ‘I realised something wasn’t right – I used to apply the cream once a week before Pixley was born and then I was applying it three times a day and it would mask the flare up.’ 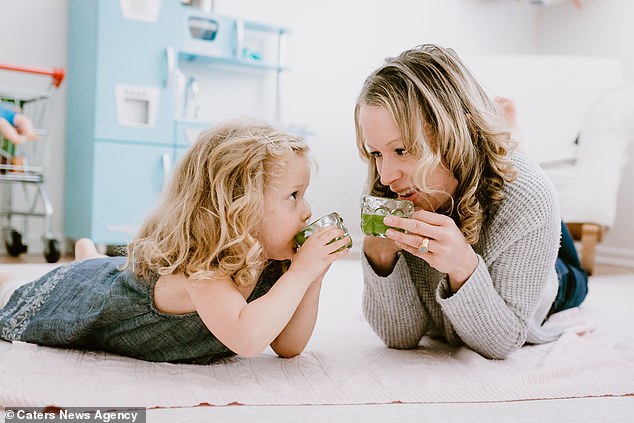 Mrs Pierce said: ‘Pixley started to get eczema at 18 months old so I swapped her diet to plant-based too – her skin is much better too’ 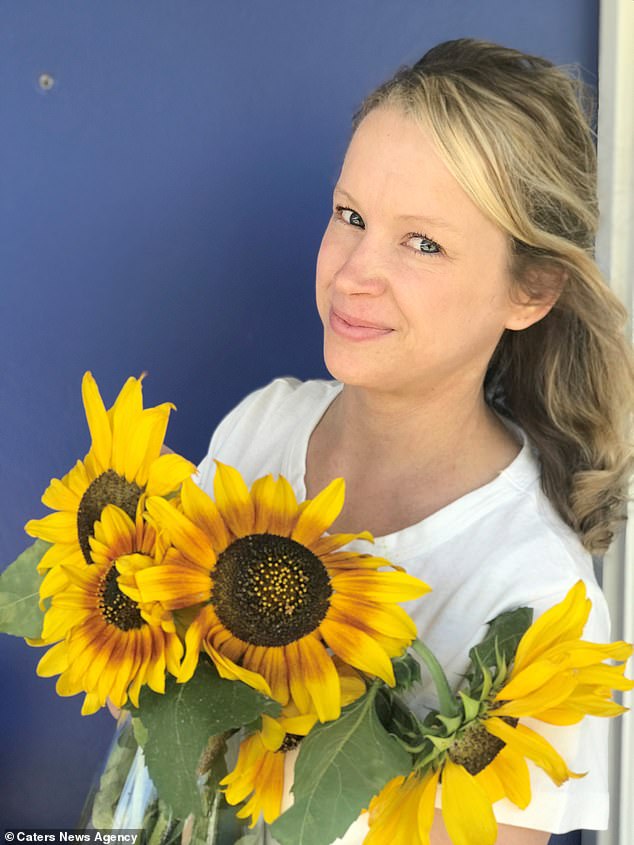 Mrs Pierce said quitting all moisturisers combined with a diet change was ‘a massive turning point for my skin’. She is pictured recently

From October 2016, Mrs Pierce attempted to clear her skin through alternative ways.

She cut out dairy and gluten and then, after speaking with other sufferers of eczema who claimed to have been healed with a vegan diet, she removed fish and meat from her diet in March 2017.

Mrs Pierce also stopped using all kinds of moisturisers to treat her dry skin and went four weeks without bathing, only using a sponge.

This goes against general advice for people with eczema, which promotes ‘soak and seal’ – a person soaks in water and then immediately moisturises so that their dry skin retains as much moisture as possible.

She said: ‘I read online about no moisture therapy and I was willing to give anything a try.

‘I had to wash with a sponge for four weeks and I sat in the sun for 15 minutes a day to get some vitamin D.

‘Naturally when you see a dry patch of skin – you want to moisturise but it actually slows down the healing.

‘I felt uplifted and encouraged to continue eating a plant-based diet because every day my skin was getting better.

‘Now I only have three or four flare ups a year when the season changes and they only last a few days.’

Many have called topical steroid withdrawal a fad, however, it has been recognised by the National Eczema Association since 2013.

Also known as red skin syndrome, the disorder does not have many statistics to show how common it is.

One 2003 study from Japan, found that 12 per cent of adults who were taking steroids to treat dermatitis developed RSS.

The British Association of Dermatologists accept that doctors still do not recognise this condition.

BAD spokesman, Dr Anton Alexandroff, said: ‘In rare circumstances, overuse of strong steroid can lead to thinning of the skin. This overuse doesn’t make the eczema worse, but it can sometimes trigger an acne-like problem, particularly on the face, which then flares up when steroids are stopped.

‘Some people refer to this as steroid withdrawal or steroid addiction, however, this isn’t something that is formally recognised by dermatologists.

‘The differing opinions come down to whether this skin reaction is caused by stopping steroid treatment, or by a flare-up of the underlying disease because the treatment has stopped suddenly. Dermatologists believe it is the latter.’

Symptoms of TSW include:

Excessive sweating and itching is a sign of recovery.  Many sufferers also develop insomnia.