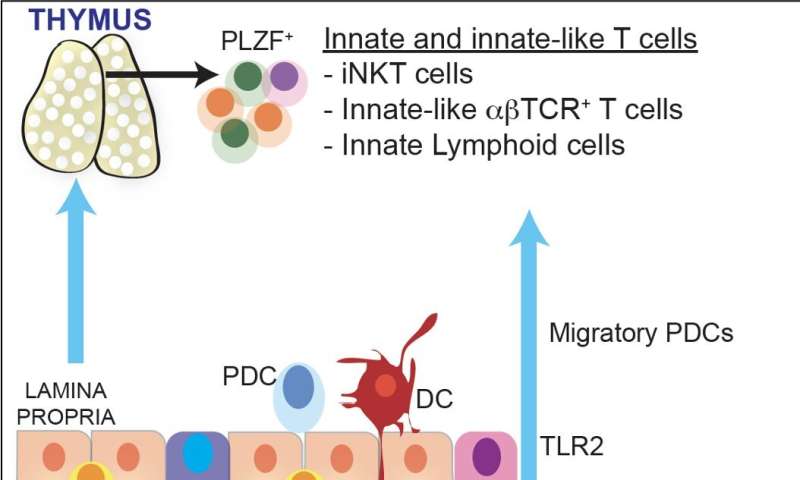 Newborns face unique immunological challenges immediately after birth. As they depart a relatively sterile fetal environment, they are abruptly exposed to a multitude of foreign antigens, the major burden of which is in the form of the microbiota newly colonizing the gastrointestinal tract. These rapidly multiplying foreign invaders represent, by far, the biggest threat to the neonatal immune system, which has to recognize and classify these organisms as benign, commensal or pathogenic.

Research shows that effective “crosstalk” or communication between early microbes and mucosal immune cells is essential to the formation of healthy microbial communities and promotion of a well-functioning immune system. The cells of the immune system that participate in mucosal immunity develop in an organ called the thymus located under the breastbone above the heart. Until now, it has been unclear if intestinal microbes influence the development of these cells in the thymus in early life.

Researchers at the Mucosal and Immunology Biology Research Center (MIBRC) at Massachusetts General Hospital now report that gut microbes regulate the development of specialized immune cells in the thymus that play a critical role in mucosal tolerance. The findings of their extensive research were published in Proceedings of the National Academy of Sciences this week. Nitya Jain, Ph.D., and colleagues focused their studies on a subset of immune cells that express the transcription factor PLZF. These cells, collectively called innate and innate-like lymphocytes, typically function at the gut mucosal barrier interface and provide immune protection at mucosal sites.

To study the development of these immune cells in the context of gut microbes, researchers monocolonized germ-free mice with a model human commensal, Bacteroides fragilis, and demonstrated that this single species of bacteria could restore the development of PLZF+ innate and innate-like lymphocytes in the thymus of infant mice. In further proof-of-concept studies, they showed that a mutant B. fragilis lacking expression of Polysaccharide A (PSA) was unable to do the same, suggesting that specific microbial antigens could regulate this early life developmental process. A similar deficit in these cells was observed in mutant mice that lacked the expression of Toll like receptor 2, a receptor that recognizes bacteria and bacterial components, including B. fragilis PSA, to initiate host protective immune responses.

To understand how this microbial message was delivered to developing thymic cells, Jain’s group used a novel mouse model to track the migration of cells from the colon to the thymus. The photo-conversion strategy, developed with the help of MGH’s Guillermo “Gary” Tearney’s group at the Wellman Center for Photomedicine, was highlighted in the Journal of Visualized Experiments in 2018.

Researchers showed that a class of antigen-presenting cells called plasmacytoid dendritic cells (pDCs) are imprinted by intestinal microbes and migrate from the gut to the thymus in early life to regulate the development of thymic lymphocytes. For the first time, Jain’s group has revealed “a novel communication between intestinal microbes and developing cells in the thymus,” says Jain. “It shapes the immune ‘repertoire’ in early life and affects how the host will respond to disease throughout the lifespan.”

The unbalanced development of an infant’s gut microbiome is thought to play a role in disease development later in life. Disturbing the microbiota in infancy by antibiotics or diet, for example, has been linked to increased risk of allergies, asthma and autoimmune disorders including celiac disease and Inflammatory Bowel Disease (IBD). Jain’s group demonstrates one mechanistic basis for this observation. They show that thymic PLZF+ cells did not develop efficiently in mice treated with broad-spectrum antibiotics in early life, but mice treated in later life were spared.

Jain says there “appeared to be an early-life time window when developing immune cells in the thymus were particularly susceptible to microbial influence.” Additionally, the study shows that microbe-induced altered development of thymic innate and innate-like cells in early life persists into adulthood and leads to increased susceptibility to experimental colitis. Importantly, disease severity could be moderated by the transfer of PLZF+ cells from mice that developed with normal microbiota in early life, says Jain. She adds, “This has significant implications for the design of strategies to treat autoimmune disorders such as IBD. Our studies point to a previously unexplored pathway that may be developed as an adoptive cell therapy for patients.”