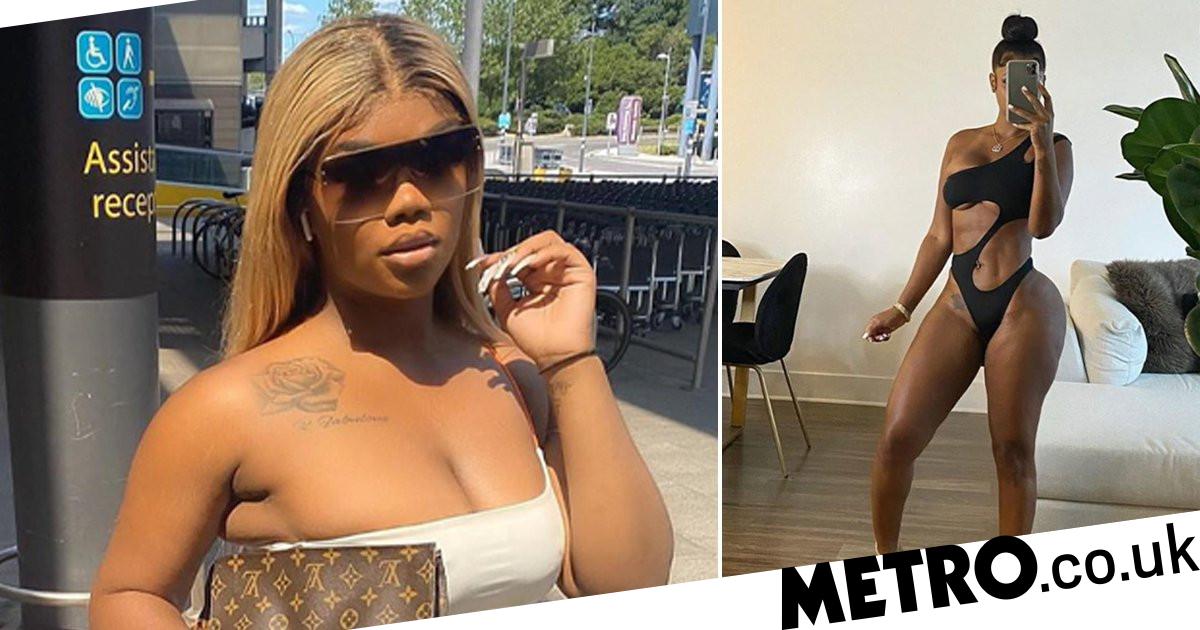 When Renee Donaldson came across the offer of a Brazilian butt lift – a surgery that removes fat from the body through liposuction then injects this into the buttocks to change the size and shape of the bum – for just £2,500, she was sure she’d found a bargain.

That low price tempted her into getting the procedure in Istanbul, Turkey.

She didn’t imagine that she would need to return to the clinic – which has not been named for legal reasons – twice more for corrective surgery, or that even after those three procedures she would be left with a ‘drooping derriere’ and a bulge on her left thigh.

Renee, 24, is now sharing her story to encourage other people considering surgery to do their research and proceed with caution.

The influencer had her first BBL surgery back in January 2019, for £2,500. Six months later, Renee claims her body looked disproportionate, so returned to the same clinic for corrective surgery, which cost an additional £3,500.

A third surgery at the treatment centre didn’t fix things, and this time Renee believes her thigh had been under the knife, too, as she is now left with a swollen bulge on her right leg.

Renee said: ‘There is a lot of pressure on how you should look and unfortunately I was lazy.

‘I should have gone to the gym and put blood, sweat and tears into achieving the “perfect” body but I chose the easy option which was to lie on a table and have surgery.

‘I saw the clinic online and read some amazing reviews – they had less than 1000 followers but I knew someone who had a BBL and breast augmentation so I had faith.

‘They were really nice and professional so I agreed to become an ambassador – they gained 20,000 followers through my page and in return I would get 50% any further treatments.

‘However this was not the case.

‘I first noticed something wasn’t right last July [2019] – it looked like I had a big bum but no legs.

‘The clinic invited me back to match the ratio and I paid more than the initial surgery but I didn’t care as I just wanted it fixed.

‘I became severely anxious and couldn’t upload any photos without editing them to make my body look normal.’

Along with a misshapen bum and swollen legs, Renee noticed her legs were painful post-surgery, and her health began to decline.

After the second surgery, Renee begged the clinic to fix her botched bottom and they offered a third treatment for free – but she claims that this time, the surgeons did something strange to her leg, leaving it even more sore and swollen.

‘They had got it wrong so many times and I said “please just get it right”,’ Renee said. ‘But when I took the dressing off, my thigh was bruised.

‘I don’t know what they had done to my thigh and every time I ask, they ignore me.

‘I have been to the doctors in the UK who think something has been put inside my thigh as it keeps swelling.

‘I have to put all pressure onto my other leg. It is a nasty feeling and I have to take a lot of painkillers.

‘I can’t even look at myself in the mirror.

‘I have cried myself to sleep on many occasions and I have been in a really bad place.’

Renee says if she had a ‘normal’ job then she most likely wouldn’t have gone ahead with the surgery, having felt pressure to meet certain body standards due to her work as an online influencer.

She now urges other women to do their research but most importantly be happy in their own skin, as she still regrets going under the knife.

Renee said: ‘I was one of those girls who was always looking at other women’s body and wishing I could have it.

‘Now, I barely go on my phone as it makes me depressed to compare what my body should have been.

‘There is a lot of pressure to look a certain way to get the best-paid collaborations online.

‘It shouldn’t be that way – I don’t want any of my followers to think they are not good enough.

‘However, I have gained more followers and opportunities since undergoing the knife.

‘I won’t bash people that want to do it but make sure your spending more than £3,500 on a BBL.

‘I’m tired of going to hospital, I’m tired of being on painkillers, I’m tired of feeling like this so let this be a wake up call for those that think BBL is an easy option.

‘I will go away soon to one of the best surgeons in the world and I don’t care how much it will cost as my health is important.’

Metro.co.uk has contacted the clinic where Renee claims she had the three procedures carried out. We will update this article with their comments if they reply.