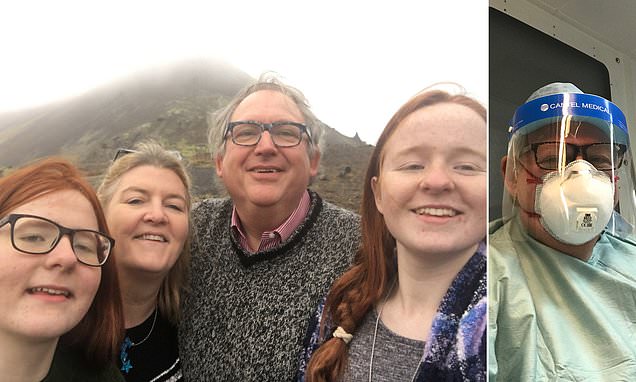 Not quite ‘right’. That’s the best way Dr Paul Trafford can find to describe how he began to feel one evening, two weeks ago, as he relaxed on the sofa after another gruelling day at work. His heart was beating quite hard in his chest. Nothing else specific, but overwhelmingly, just not quite ‘right’.

He was in fairly good health, or so he thought. In fact, as he would soon discover, a major artery supplying his heart had become almost completely blocked.

But there was no crushing pain, no problems breathing and few obvious clues that he was on the verge of a life-threatening medical emergency. And certainly no reason to be dashing off to hospital – particularly at a time when the NHS was struggling to cope with the burden of a Covid-19 outbreak. 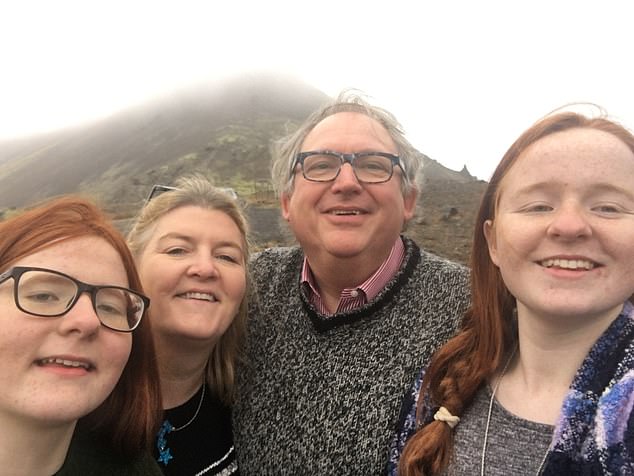 Consultant anaesthetist Dr Paul Trafford, pictured with his consultant breast surgeon wife, Dr Julie Doughty and their nieces Emily, 17, left and Libby, 17, right, returned home after work two weeks ago when he felt his heart thumping in  his chest

Now the consultant anaesthetist is sharing his experience in the hope it will encourage others not to be deterred from seeking emergency NHS treatment because of the pandemic.

‘I was sitting chatting to my wife Julie and the TV was on in the background,’ says Paul, 63, from Glasgow. ‘I just became very aware that I could feel my heart thumping in my chest.

‘It wasn’t racing, and I had no chest pain, sweating or breathlessness – the classic signs of a heart attack – so I genuinely wasn’t worried.

‘In fact, I didn’t even think it was worth mentioning to Julie at first. I fully expected it to pass.’

While Julie, a breast cancer surgeon at Glasgow’s Gartnavel General Hospital and president of the Association of Breast Surgery, went off to do some baking, Paul decided to check his blood pressure, using a monitor they had in the house.

‘It was sky high,’ he says. ‘I still wasn’t worried but decided I had better tell Julie I wasn’t feeling quite right.’

After discussing it, the couple jumped in the car and drove to nearby Queen Elizabeth University Hospital ‘to be on the safe side,’ says Paul.

It proved to be a decision that almost certainly saved his life. Within minutes, he was undergoing an electrocardiogram that found his heart’s electrical activity was haywire – a clear warning sign that problems were brewing. 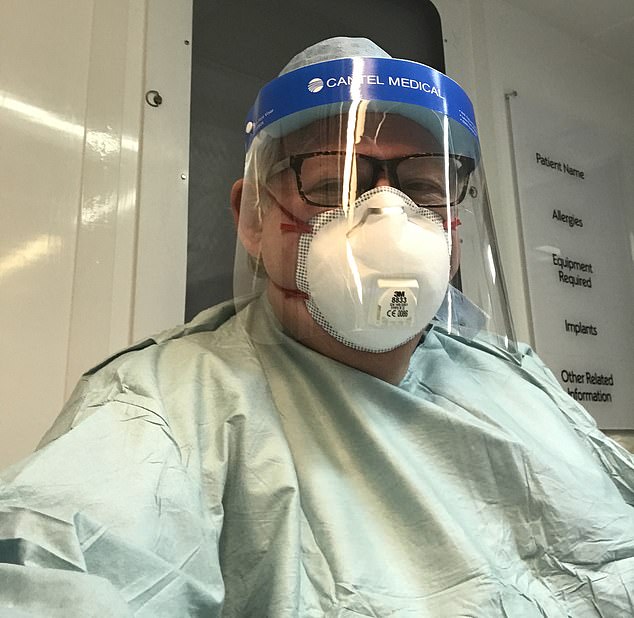 Dr Trafford, pictured, was not suffering classic heart attack symptoms such as chest pain. Luckily, Dr Trafford sought NHS help because he was on the verge of a massive cardiac event and required an emergency angioplasty

An ambulance – with blue lights flashing – was ordered to rush him to Glasgow’s Golden Jubilee National Hospital, a centre of excellence which handles the city’s cardiac emergencies.

X-rays revealed a serious blockage in a major artery that was almost certainly about to trigger a massive heart attack. ‘It was the left anterior descending artery, which supplies blood to the front part of the heart,’ says Paul. ‘Apparently cardiologists call this kind of blockage a widow-maker, because it’s so often fatal.’

They performed an emergency angioplasty, where a thin tube was fed into an artery in his right wrist and manoeuvred up into his chest to clear the blockage.

Through this, they then inserted a tiny metal device called a stent, to prop open the artery to ensure healthy blood flow in future. Astonishingly, from leaving the house at 6.30pm to beginning his recovery in the coronary care unit took just three hours.

And after being monitored for 48 hours, he was sent home with instructions to lose weight and take a daily cocktail of pills to control his blood pressure, keep his cholesterol low and stop his blood clotting too easily.

Paul says: ‘I was incredibly lucky and the standard of care I received was outstanding. But the truth is, if Julie had not been there to urge me to go to hospital, I would probably have just gone to bed for a few hours to see if the discomfort passed. And there’s every chance I would have had a massive heart attack and died. Even if it didn’t kill me, it would probably have caused so much damage that I would have ended up disabled.

‘I hate to think of anyone else in a similar position to me, sitting on these symptoms at home instead of getting the help they need.’

And Julie admits: ‘I don’t even want to think about what would have happened if he had ignored his symptoms that night and just gone to bed.

‘Paul never worries or makes a fuss about his health and never moans about feeling unwell. But he looked quite anxious – so I knew it was serious.’

Julie added: ‘I could have lost him. And when I saw him being blue-lighted to the Golden Jubilee Hospital, I felt physically sick with worry – even though I knew it was the best possible place for him to be.

‘My father died from a heart attack when I was 18 – he was just 56 – so I know what it’s like to lose somebody very close to heart disease. I don’t want to go through that again.’

However, Paul’s story may not be unique – a steep drop in A&E attendance since the pandemic began has left health chiefs deeply concerned. They fear it could mean that thousands of people showing signs of an approaching heart attack are risking death by opting to stay away from hospital, either because they are worried about overloading the hard-pressed NHS or because they fear they might catch Covid-19 from other patients.

Figures released last month by NHS England showed the number of people attending casualty with symptoms of a possible heart attack halved during March, from an average of 300 a day to just 150. That’s the equivalent of more than 1,000 possible heart attacks every week going unchecked. 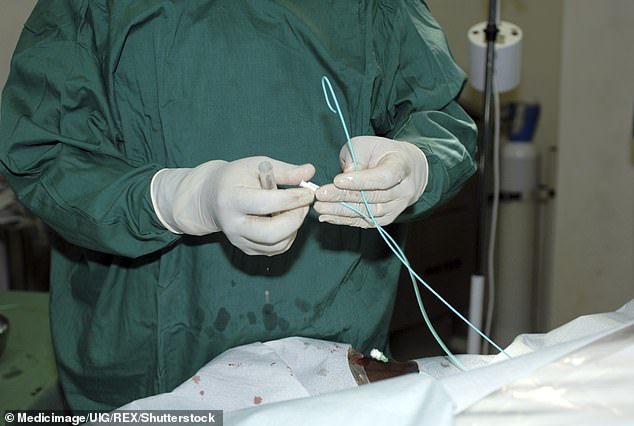 The British Heart Foundation, which has expressed alarm at the drop-off in attendance, recently surveyed cardiologists across London, where Covid-19 rates have been highest. It found the number of emergency treatments, such as inserting stents, dropped by 38 per cent in the second half of March compared with the first.

More than 70 per cent of those surveyed blamed patients’ fears of catching Covid-19 in hospital. But 46 per cent were also convinced that many stayed away due to worries about putting pressure on an already overburdened NHS.

Professor Naveed Sattar, from Glasgow University’s Institute of Cardiovascular and Medical Sciences, fears in many cases this will end in tragedy.

He says: ‘Someone who delays coming to A&E might find that, instead of being treatable, they have instead suffered severe heart-muscle loss due to their blocked artery.’

This can lead to death or, even if they survive, increased risk of heart failure, irreversible scarring of the cardiac muscle that causes severe breathlessness, exhaustion and swollen feet and ankles.

‘I work mainly in the area of heart-disease prevention,’ says Prof Sattar.

‘Some of my high-risk patients, for example, those who are obese or have type 2 diabetes, who really should be coming in for check-ups, say they don’t want to in case they expose themselves to Covid-19, while others fall through the net because they don’t want to bother the busy NHS.’

BHF associate medical director Dr Sonya Babu-Narayan says: ‘Heart attacks don’t stop for a global pandemic – they are still a top priority. Patients should not delay because they think hospitals are too busy.’

And consultant cardiologist Dr Ramzi Khamis, from West London’s Hammersmith Hospital, says: ‘We are quite anxious about the patients we are not seeing, as well as those who delay attendance.’

Although Paul has been on pills for high blood pressure for several years and admits he is overweight, he had little reason to be concerned before his heart scare. ‘I saw a cardiologist last year for a complete check-up and was told there were no other problems.

‘My cholesterol was very healthy, my blood sugar was normal and a treadmill test, where doctors do an electrocardiogram to check your heart while you walk, was all clear.’

But his workload as a consultant anaesthetist has increased significantly due to the coronavirus pandemic. Due to retire from his part-time NHS post at the end of April, instead he has been working 11-hour shifts up to five days a week as hospitals try to clear the backlog of cancelled operations triggered by the outbreak – such as patients in urgent need of breast-cancer surgery.

Stress, due to its body-wide effects, can in the long term raise the risk of heart problems.

Now, though, Paul says: ‘I feel better than I have done in years.

‘I hate to think of anyone else in a similar position to me, sitting on these symptoms at home and ignoring them. 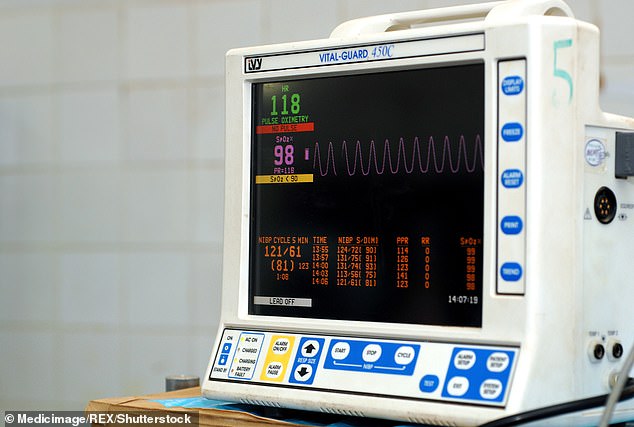 Figures released last month by NHS England showed the number of people attending casualty with symptoms of a possible heart attack halved during March, from an average of 300 a day to just 150. That’s the equivalent of more than 1,000 possible heart attacks every week going unchecked

‘The message from my experience is clear – the NHS is still there for you, so ask for help if you need it.’

Julie adds that fears of catching Covid-19 in hospital are mostly unfounded, since the majority cordon off treatment areas for coronavirus patients from those suffering with other ailments.

And while many coronavirus sufferers make a full recovery, the chances of surviving a heart attack unscathed are significantly lower.

‘If just one person reads this and decides not to stay away from hospital when they have even the slightest symptoms of a heart attack, it will be worth it because it could save their life,’ she says.