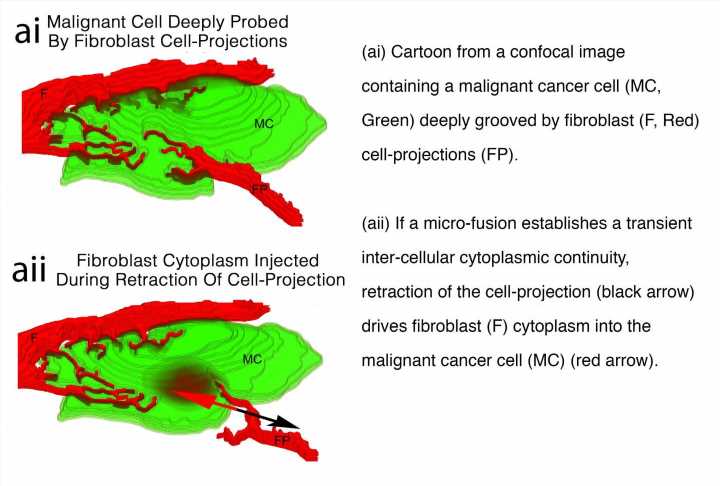 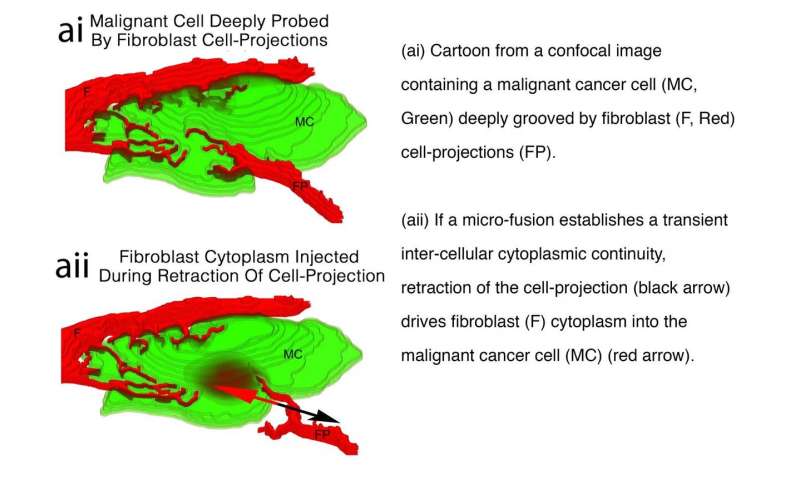 Although most cancer cells are killed by chemotherapy, individual cells vary in their sensitivity, so that some cancer cells often escape. Diversity among cancer cells is thus an issue for cancer treatment.

Previously diversity was thought to be mostly due to genetic variability among cancer cells. Now, however, University of Sydney researchers have discovered a whole new source of cancer cell diversity, with profound implications for cancer treatment.

In 2012, a team led by Professor Hans Zoellner from the University of Sydney School of Dentistry, published that cancer cells exchange contents with surrounding normal cells called fibroblasts , but the mechanism remained unknown, until now.

The results published today in Biophysical Journal by Zoellner’s team, finally explain how.

All cells constantly probe each other with tentacle-like cell-projections. These reach out to neighbours, probe, and then retract, as part of the way cells sense their environment. When a cell-projection retracts, there is a brief increase in fluid pressure within the projection, to force cytoplasm—the jelly-like fluid within the cells—back into the cell body.

He reasoned that transient micro-fusions between the retracting cell-projections and any neighbouring cell, would permit cytoplasm from the cell-projection to be injected into the neighbour, instead of being returned to the fibroblast.

Working in both Sydney at the Faculty of Medicine and Health and on sabbatical in New York’s Memorial Sloan Kettering Cancer Center, Zoellner and his team tested this idea by combining mathematical modelling, cell experimentation, and computer simulation. The outcome, is discovery of what seems a previously unknown biological mechanism, now coined ‘cell-projection pumping’.

The work continues, and Zoellner says: “This is a whole new cancer target. Now that we know it’s happening, we can think about trying to block it, and work towards better outcomes.