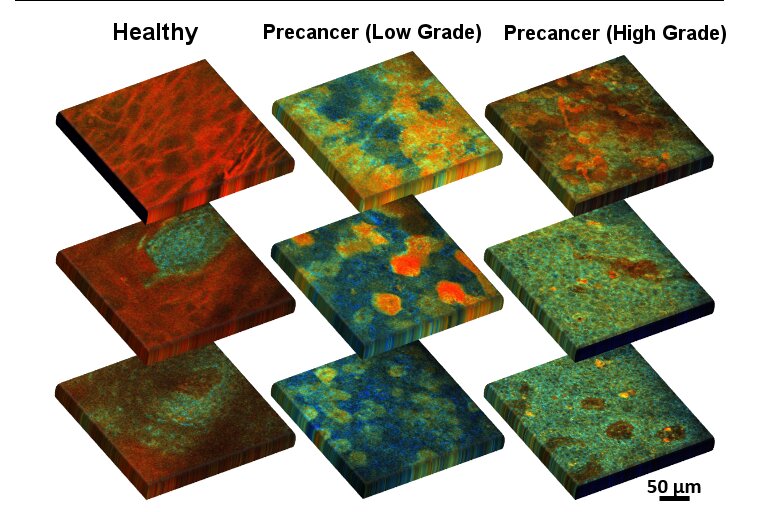 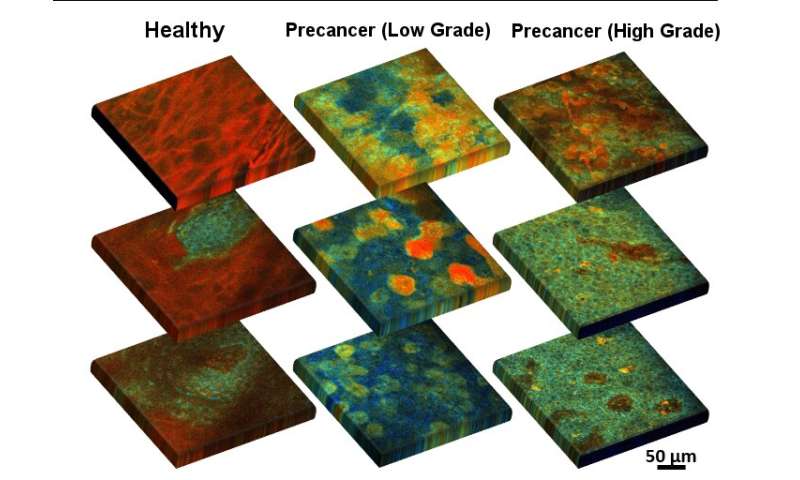 A team of researchers at Tufts University’s School of Engineering and its School of Medicine, and physicians at Tufts Medical Center have developed a method using fluorescence to detect precancerous metabolic and physical changes in epithelial cells lining the cervix. According to the researchers, the new imaging method opens the door to a non-invasive, early-stage bedside diagnostic. As described today in Cell Reports Medicine, the method can visualize both metabolic and structural changes within individual cells and at different depths of the epithelial tissue near the surface, while also being able to scan the surface in a completely non-destructive manner. The combined information provides a highly accurate assessment of metabolic states in tissues, often the first changes that occur in the transition to cancer.

The imaging method developed by the team looks at the intrinsic fluorescence of the cell, so it requires no contrast agents or radioactive tracers and can be observed using an optical microscope that shines light on the area examined and looks for a fluorescent “glow” at different wavelengths. Unlike biopsies, it requires no painful surgical incisions, and unlike PET imaging used for detecting metabolic signatures of cancer, the fluorescence imaging method provides much higher resolution for surface tissues, does not require intravenous injection of contrast agents, and could theoretically be applied at bedside as part of a routine regimen of monitoring.

Early detection is the most critical factor in the successful treatment and prevention of epithelial cancers, which include both skin and cervical cancers. Just as high risk individuals can reduce the risk of developing skin cancer with regular visits to the dermatologist to scan for precancerous lesions, cervical cancer could theoretically benefit from a similar strategy. However, the standard for diagnostics—colposcopy followed by acetic acid application and selection of the worst appearing site for biopsy—is expensive, often requires multiple biopsies to obtain sufficient sensitivity in detection, and can be uncomfortable or even painful for patients. Previous studies have shown that the discomfort and inconvenience of the procedure has kept many women from keeping up with monitoring their condition.

“Although more work needs to be done to transition the method from the laboratory to the patient bedside, the technology enables us to gather more information on early cell states than is available by current diagnostic approaches, adding accuracy and precision to a convenient procedure,” said Irene Georgakoudi, corresponding author of the study and a professor of biomedical engineering in the School of Engineering at Tufts.

Georgiakoudi added that even though metabolic transitions are an early hallmark of developing cancer, no current early detection methods examine metabolic states.

The method is based on the fluorescence of two important coenzymes—biomolecules that work in concert with enzymes—when excited by a laser beam. The coenzymes nicotinamide adenine dinucleotide (NADH) and flavin adenine dinucleotide (FAD) are involved in a large number of metabolic pathways in every cell; for example, determining how they use up glucose or oxygen or how they find alternative sources of energy when glucose or oxygen are in short supply. An examination of the ratio of these coenzymes, a measure of the intensity of their fluorescent signals, and the arrangement of mitochondria (the energy producing “batteries” of the cell), can help reveal whether the cell is undergoing changes that would lead it to cancerous growth. The method can also track the size and shape of individual cells—often an indicator of disease transition—and can gather this information from different depths, which can be useful in identifying the hallmark invasion of precancerous cells through different layers of the epithelium, resulting in the loss of definition in epithelial tissue structure.

“Just looking at the metabolic readouts of the cells is useful, but adding a third dimension, looking at how the cells in the cervical epithelium change their metabolism and structure at different depths, significantly enhances our ability to accurately identify disease when it shows up,” said Dimitra Pouli, researcher at Tufts University’s School of Engineering, pathology resident physician at Beth Israel Deaconess Medical Center and Harvard Medical School, and lead author of the study. “We put all these quantitative parameters into an automated diagnostic algorithm, which makes it more convenient for the physician or technician using the method to interpret the results.”