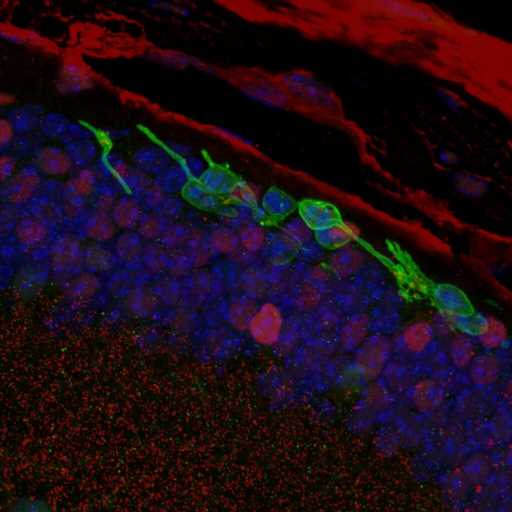 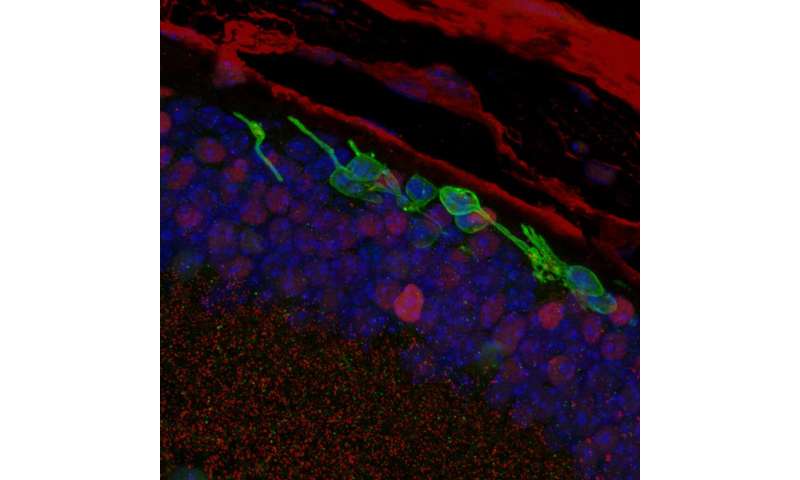 Researchers have discovered a technique for directly reprogramming skin cells into light-sensing rod photoreceptors used for vision. The lab-made rods enabled blind mice to detect light after the cells were transplanted into the animals’ eyes. The work, funded by the National Eye Institute (NEI), published April 15 in Nature.

Up until now, researchers have replaced dying photoreceptors in animal models by creating stem cells from skin or blood cells, programming those stem cells to become photoreceptors, which are then transplanted into the back of the eye. In the new study, scientists show that it is possible to skip the stem-cell intermediary step and directly reprogram skins cells into photoreceptors for transplantation into the retina.

“This is the first study to show that direct, chemical reprogramming can produce retinal-like cells, which gives us a new and faster strategy for developing therapies for age-related macular degeneration and other retinal disorders caused by the loss of photoreceptors,” said Anand Swaroop, Ph.D., senior investigator in the NEI Neurobiology, Neurodegeneration, and Repair Laboratory, which characterized the reprogrammed rod photoreceptor cells by gene expression analysis.

“Of immediate benefit will be the ability to quickly develop disease models so we can study mechanisms of disease. The new strategy will also help us design better cell replacement approaches,” he said.

Scientists have studied induced pluripotent stem (iPS) cells with intense interest over the past decade. IPSCs are developed in a lab from adult cells —rather than fetal tissue— and can be used to make nearly any type of replacement cell or tissue. But iPS cell reprogramming protocols can take six months before cells or tissues are ready for transplantation. By contrast, the direct reprogramming described in the current study coaxed skin cells into functional photoreceptors ready for transplantation in only 10 days. The researchers demonstrated their technique in mouse eyes, using both mouse- and human-derived skin cells.

“Our technique goes directly from skin cell to photoreceptor without the need for stem cells in between,” said the study’s lead investigator, Sai Chavala, M.D., CEO and president of CIRC Therapeutics and the Center for Retina Innovation. Chavala is also director of retina services at KE Eye Centers of Texas and a professor of surgery at Texas Christian University and University of North Texas Health Science Center (UNTHSC) School of Medicine, Fort Worth.

Direct reprogramming involves bathing the skin cells in a cocktail of five small molecule compounds that together chemically mediate the molecular pathways relevant for rod photoreceptor cell fate. The result are rod photoreceptors that mimic native rods in appearance and function.

The researchers performed gene expression profiling, which showed that the genes expressed by the new cells were similar to those expressed by real rod photoreceptors. At the same time, genes relevant to skin cell function had been downregulated.

The researchers transplanted the cells into mice with retinal degeneration and then tested their pupillary reflexes, which is a measure of photoreceptor function after transplantation. Under low-light conditions, constriction of the pupil is dependent on rod photoreceptor function. Within a month of transplantation, six of 14 (43%) animals showed robust pupil constriction under low light compared to none of the untreated controls.

“Even mice with severely advanced retinal degeneration, with little chance of having living photoreceptors remaining, responded to transplantation. Such findings suggest that the observed improvements were due to the lab-made photoreceptors rather than to an ancillary effect that supported the health of the host’s existing photoreceptors,” said the study’s first author Biraj Mahato, Ph.D., research scientist, UNTHSC.

Three months after transplantation, immunofluorescence studies confirmed the survival of the lab-made photoreceptors, as well as their synaptic connections to neurons in the inner retina.

Further research is needed to optimize the protocol to increase the number of functional transplanted photoreceptors.

“Importantly, the researchers worked out how this direct reprogramming is mediated at the cellular level. These insights will help researchers apply the technique not only to the retina, but to many other cell types,” Swaroop said.