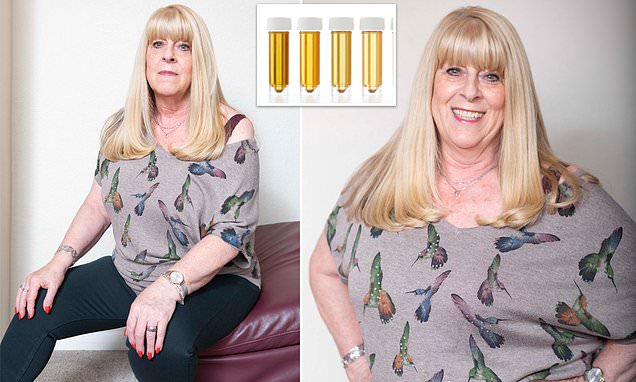 Why women’s agonising UTIs are STILL being misdiagnosed: Bacteria in urine samples often vanish by the time test tube gets to lab for analysis

The crippling pain that was to become all too familiar for Carolyn Andrew first struck when she was on holiday.

‘The problems all started after a six-hour drive from London to Edinburgh in August 2016,’ she says. ‘I spent the next ten days in agony, hardly leaving the hotel room.

‘I went to a local GP who gave me antibiotics, but nothing worked. It was actually quite terrifying.’ 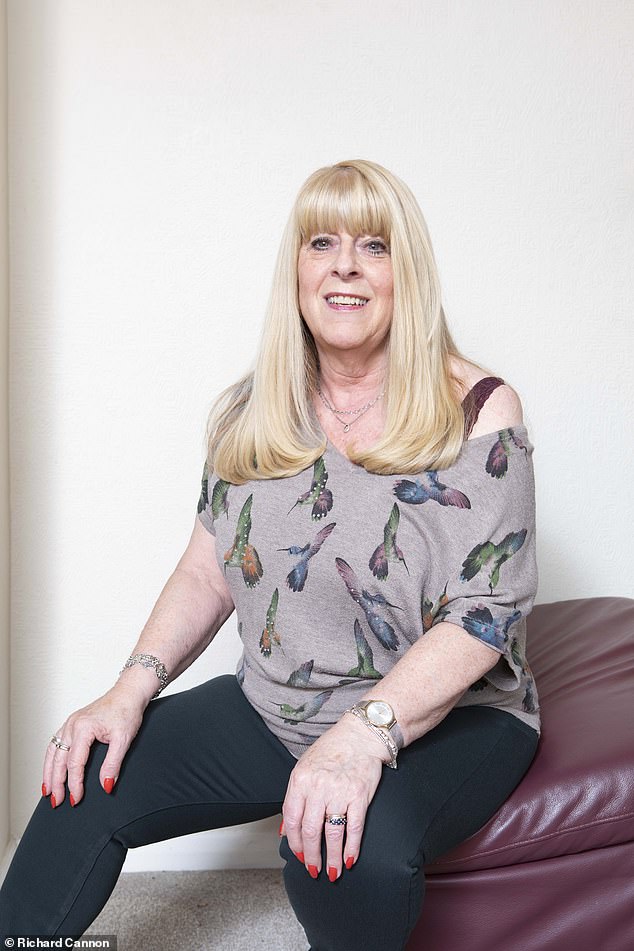 ‘Our research shows there are at least 1.7 million other people out there not getting diagnosed and not being believed,’ says Carolyn, who lives with her husband, Jack, 70, in Bushey, Hertfordshire.

‘Some are in permanent agony and some are suicidal.

‘It’s taken me all this time to get my life back, but I’m one of the lucky ones. Some people suffer for decades. It is a massive problem. We want to raise money to do a study to show how many people are going back to GPs again and again with crippling urinary tract infections.

‘We want to be able to go to the Royal College of GPs and say: ‘Look, your own doctors are not being taught how to deal with this.’ ‘

For Carolyn, a mother of two grown-up daughters, one of whom has suffered a similar 18-month illness caused by a urine infection, a solution cannot come soon enough.

Carolyn says: ‘Although I still get flare-ups and can’t go out because of the pain, I am now just about all right after two-and-a-half years of antibiotics.

‘When my condition was at its worst, I had to go to the loo every 15 minutes and I would get pain shooting down my legs and arms and into my hands.

‘I have been given all sorts of drugs and suffered all sorts of side-effects, including blurred vision and complete brain fog, but the only thing that really worked was very long- term antibiotics.’ 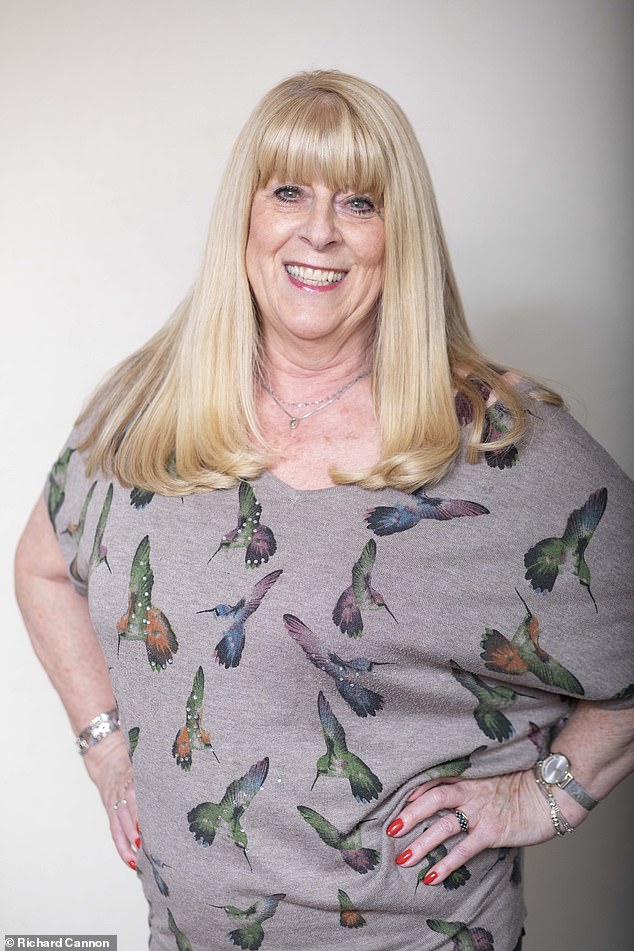 A urinary tract infection occurs when disease-causing bacteria colonise and attack the tissues of the urethra, the tube carrying urine out of the body, causing pain in the stomach, back and legs. Anyone can develop the condition, but women are most commonly affected.

Sufferers have a constant sensation of needing to urinate, but experience excruciating pain and produce little or no urine when they try. Sleep, work and sex lives can all be affected.

The rationing of antibiotics is believed to explain partly why infections such as Carolyn’s are occurring more frequently.

It is thought the insistence on short courses of antibiotics in the drive to prevent the growth of resistant bacteria has had the opposite effect in urinary tract infections — encouraging harmful bacteria to retreat into the bladder wall where they cannot be reached by antibiotics, only to re-emerge with a vengeance months or even years later.

The use of urinary catheters and other similar equipment in hospitals is also believed to be fuelling the rise of UTIs. 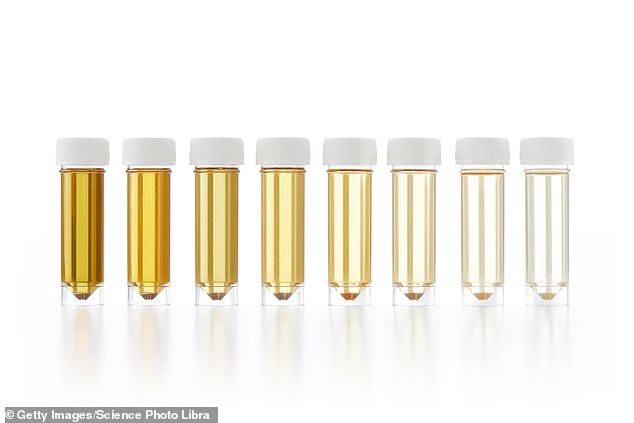 The infection occurs when disease-causing bacteria colonise and attack the tissues of the urethra. Pictured: Stock image of urine samples for analysis

In fact, more than half of all urine infections are contracted during hospital treatment, NHS England data shows.

According to a study from Aston University in Birmingham, up to one in four hospital patients is given a urinary catheter — tiny flexible tubes inserted directly from the outer end of the urethra into the bladder.

The devices quickly attract harmful bacteria and the risk of developing a UTI increases by an astonishing 5 per cent for every day the catheter remains in place.

Thousands of patients become ill as a result and, in more than a third of these cases, the infection turns into life-threatening septicaemia. Of that group, one in three will die.

Richard Martin, an associate professor of material physics who led the Aston University research, has come up with a solution which could save the NHS millions of pounds — making the catheters from a biodegradable type of glass coated with zinc.

Zinc is one of a number of metals known to kill E. coli and Staphylococcus aureus — bacteria often implicated in UTIs.

Tests showed the zinc-coated glass produced a ‘complete kill’ of E. coli and a near complete kill of S. aureus, so such bacteria would be prevented from entering patients’ bladders via the catheter.

‘This material produces a controlled release of antimicrobial compounds, which would save doctors giving patients antibiotics for months and months,’ says Professor Martin.

Many other patients are worse affected than Carolyn.

Louise Hale, 44, (not her real name) a married mother and freelance documentary maker from London, sobbed as she described how she has fought to conceal her chronic UTI, which first emerged in 2016 when her daughter (now four) was only a few months old.

‘It is the darkest pit I have ever been in,’ she says. ‘It has stopped me having another child and almost destroyed my marriage. I am frequently out on location and you can’t do that if you need to find a loo every 20 minutes.

‘I have spent more than £5,000 on different private treatments and investigations, none of which worked.

‘I have had to take more than a year off work, which has been very difficult financially. I am now at last getting better, but it has been hell.’

Problems begin when an infection recurs but does not register on the very basic ‘dipstick’ test used by GPs to detect bacteria in urine samples.

Most GPs use dipsticks carrying reactive agents on a strip of paper, which change colour if there are compounds linked to bacterial activity in the sample.

Doctors can either prescribe antibiotics or send off the urine sample for further testing.

James Malone-Lee, an emeritus professor of medicine at University College London and a leading expert on the condition, says many bacterial infections in urine disappear before a sample gets to a laboratory.

‘Looking at the sample straightaway down a microscope is the simplest and best way to diagnose infection,’ he says.

‘Often the samples have been left out at room temperature and have gone off before they are tested, or they might take two or three days to get to the lab so they’re pretty useless anyway.

‘People with chronic or repeated infection are not being diagnosed or given the much longer-term antibiotics they need.’

The push is on to find better tests. One being developed by the University of Bath uses a smartphone camera to diagnose infections. Experts, however, say much still needs to be done.

Ased Ali, a consultant urologist at Mid Yorkshire Hospitals NHS Trust in Wakefield and a medical consultant to charity Bladder Health UK, says: ‘I am seeing more than double the number of patients with UTIs than I saw a decade ago. We need new ways of managing the problem and new guidance for GPs on how to do that.’