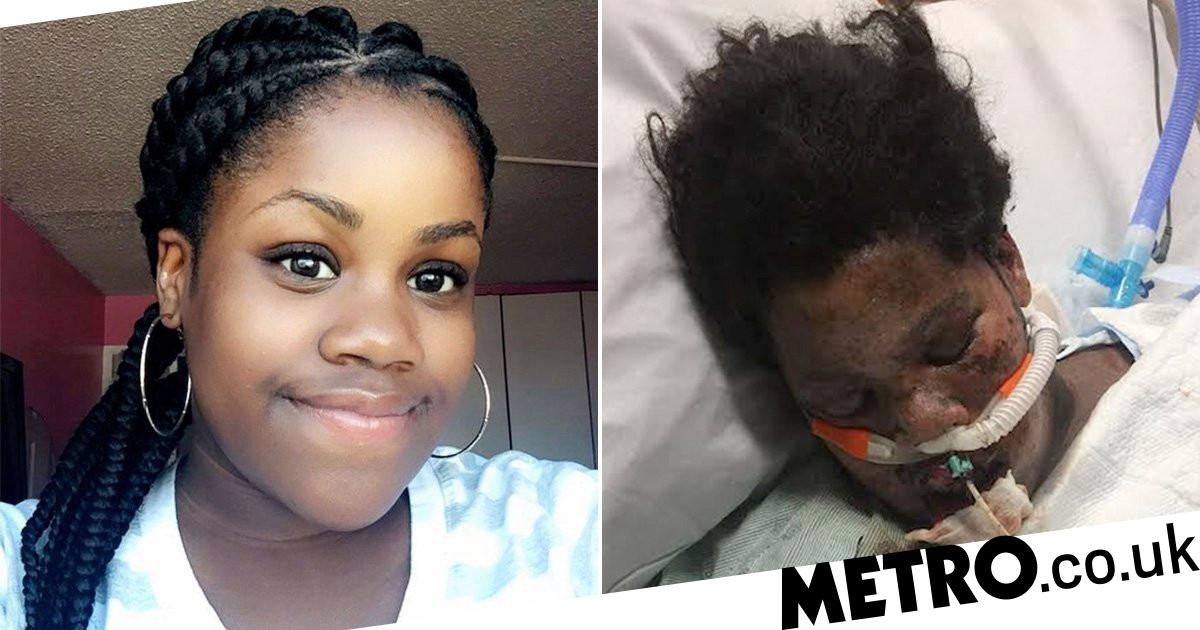 Brianaliz Moreno is lucky to be alive after anti-anxiety medication triggered a horrific allergic reaction that caused her to ‘burn from the inside out’.

When Brianaliz, 17, began taking prescribed medication to help her deal with anxiety and depression, she immediately began suffering from eye pain, light sensitivity, and extreme fatigue.

But the teenager, living in Killeen, Texas, dismissed those symptoms as just standard side effects that would go away in a few weeks.

She had no idea of the ‘hell’ that she was about to endure.

Two weeks later, the teen’s symptoms worsened and she suffered from high fevers, while she also noticed the skin inside her mouth was peeling off.

After being admitted to hospital with a dangerously high fever of 40.5 celsius, Brianaliz suddenly collapsed and fell into a coma – with doctors telling her distressed mother Audeliz, 55, that her daughter might never wake up.

Brianaliz was suffering from Stevens-Johnson Syndrome; a rare, serious disorder of the skin and mucous membranes that causes the top layer of skin to die and is usually caused by a reaction to medication.

Brianaliz said: ‘At that time, I was dealing with some mental health issues, so my doctor prescribed me some medication to help deal with anxiety and depression.

‘I felt a bit weird straight away after taking it. I didn’t feel like myself, I had sore eyes, I couldn’t look at lights, I felt weak.

‘I thought it might just be my body making an adjustment to the medication.

‘My fever wasn’t coming down, and that night, I had blisters all over the inside of my mouth, and so we went into hospital.

‘They look skin samples from my nose and lip, and that’s the last thing I remember.’

Brianaliz was in a coma for an entire month – but thankfully, she survived.

She had to learn to walk again after being in a hospital bed for so long with blisters ravaging her entire body, and also needed multiple surgeries on her eyes.

As the condition caused blisters to form on Brianaliz’s cornea, her vision will be affected for the rest of her life. She is now considered legally blind.

‘When I woke up from the coma, everyone was so happy and excited,’ said Brianaliz.

‘I found out later that my family were all saying their goodbyes. They didn’t think i’d make it, but my mom always had faith that I’d pull through.

‘It took me a while to realise that my skin had actually fallen off my body.

‘I had to learn how to walk again and I relied on tubes to help me breathe and to eat.

‘It left me legally blind and I’ve had four surgeries on my eyes. It was just horrible and so painful.

‘It was shocking looking back at photos of myself. I felt sick seeing myself like that.

‘I’m so grateful for my mum. She never left the hospital not even for one day.

‘She slept on a hard sofa bed for a month until we could go home. She is my angel.’

Brianaliz is sharing her story in the hopes of raising awareness of this rare condition so anyone suffering can spot the signs early and feel less alone in their struggles.

She added: ‘Ever since this happened, all I’ve wanted to do is raise awareness.

‘I never expected this to happen. I never realised how much I took for granted.

‘This experience made me mature very quickly. It was really hard on my social life.

‘No one at school knew what happened at first. So when I eventually did go back, everyone hit me with questions about why my face looked different or why my eyes were so red.

‘I was bullied. Everyone knew I had vision problems and some kids would throw things at me knowing that I couldn’t see where it came from.

‘Things are getting a bit better now, but it’s not easy. It’s affected my entire life.

‘After this experience, I’ve decided I want to pursue a career where I can help people. I’d love to become a social worker or therapist.

‘It’s not going to be easy with my eye problems, but I know it will be okay.’