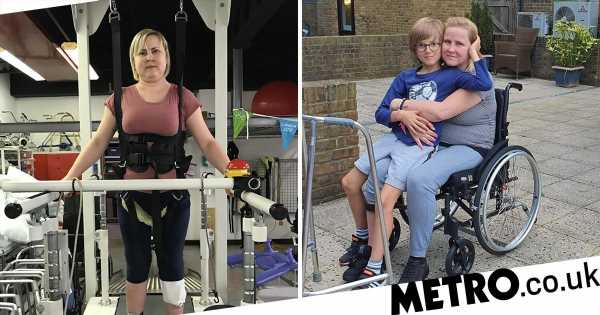 When Emese Illes-Toth found herself in agonising stomach pain as she walked to the post office, she thought it was your usual tummy ache.

But just five days later, the mum woke up paralysed from the waist down.

An MRI scan revealed that Emes, who had always been healthy and active, had transverse myelitis – a rare condition that causes inflammation of her spine – but doctors have no clue what caused it.

One year later, Emese, 44, has not been able to walk unaided. She has had to move out of her home and is unable to live with her son as a result.

The mum is now hoping to raise £10,000 for specialist equipment not available on the NHS, which will help her to walk and allow her to return home to her ten-year-old son, Almos.

Emese, from Hemel Hempstead, Herts, said: ‘There was no accident, no warning beforehand.

What is transverse myelitis?

Transverse myelitis (TM) is a rare neurological disorder, one of a group of neuroimmunologic diseases of the central nervous system, which also include ADEM, NMO (Devic’s Disease).

These conditions all involve inflammatory attacks in the central nervous system. They are differentiated primarily by the location of the attack and by the attacks being either monophasic (one off) or multiple episodes. These disorders share common mechanisms and have many common symptoms.

TM may occur in isolation or with another illness. When TM occurs without apparent underlying cause, it is referred to as idiopathic. Idiopathic TM is assumed to be a result of abnormal activation of the immune system against the spinal cord. TM often develops alongside viral and bacterial infections. TM can be acute or slow developing.

Approximately one third of patients with TM report a flu-like illness with fever, around the time of the onset of neurological symptoms.

‘There was inflammation so it’s not something I’ve done to myself from an accident or something.

‘I hadn’t even been ill. I’m a fairly healthy person to be honest which is why it was a shock to the system.

‘The first couple of weeks I cried a lot. It was mainly because I was always very active and very independent.

‘My legs giving up on me like that was devastating.’

While Emese has accepted her condition, she’s heartbroken to be separated from her son as a result.

‘My bad days are mainly because I’m away from my family now, it’s not even the condition,’ she said.

‘Sometimes I do cry because of the condition, but it’s mainly because I miss everyone and want to go home.

‘I hadn’t heard about it before either, and I actually graduated from high school as a nurse. I had never heard of this condition myself.

‘It’s a very, very rare condition. I am “one-in-million” as it affects one to two people out of a million. It’s really rare. Strange things always happen to me, so there you go.’

Emese says that before her sudden stomach pain, she had no sign that anything was wrong and couldn’t have imagined that she would soon be paralysed.

‘With hindsight, I did have skin sensitivity around my navel, but you don’t really think about it,’ she said. ‘You have some sensitivity on your skin and then it goes away.

‘Then I just woke up with a really strong stomach ache. When I turned onto my stomach it went onto my back. It was really bad around my mid-section and that’s where the pain was.

‘The skin sensitivity intensified as well. I had to sit up straight while driving as I couldn’t lean back because it was too painful when [the seat] touched my skin.

‘When my right knee started to act up, it wasn’t supporting my weight properly and I was limping. I still went to work, drove to work and drove my son to school, but I started to be sick as well.

‘I called the GP and went to see him and he said this wasn’t gastric. My right leg wasn’t behaving. I couldn’t control it completely from my knee.

‘By that time the pain went into my abdomen and I had some numbness in my thigh. He thought I had dislocated my spine and was very worried. He sent me to A&E immediately.

‘My son’s father took me to A&E and I walked in, and I haven’t been home since.’

Just five days after that initial stomach pain, Emese was paralysed and stuck in a hospital bed.

She was treated with steroids and since her inflammation cleared she has had to relearn how to walk with the help of a physiotherapist.

While she made progress and was able to walk with a frame, Emese’s right knee then became locked and she needs specialist equipment to continue her progress.

The mum is fundraising to buy a Bioness L300 GO stimulation system which will send electrical impulses to stimulate her leg and raise it from the ground – helping her in the final stage of her recovery.

Emese said: ‘It would be a game-changer for me. It would change my life.

‘I know it sounds silly, but every time I think about it I get this very good, very positive warm feeling inside of me and I know that’s what’s going to help me with the final stage of my recovery.

‘They say a positive mindset and determination are 90% of getting better. I’m generally a positive person and I have accepted it.

‘My leg just stays [in hyperextension] and it’s extremely difficult for me to bend it. That’s what [the equipment] helps.

‘It also helps with the weak hamstrings so you can actually lift your leg up better and more easily. It helps you to go up and down the stairs.

‘I’m hoping it will only take me another six months to get rid of this final thing, and then I’m back to normal.’

If you’d like to donate towards Emese’s funds, you can do so through GoFundMe.