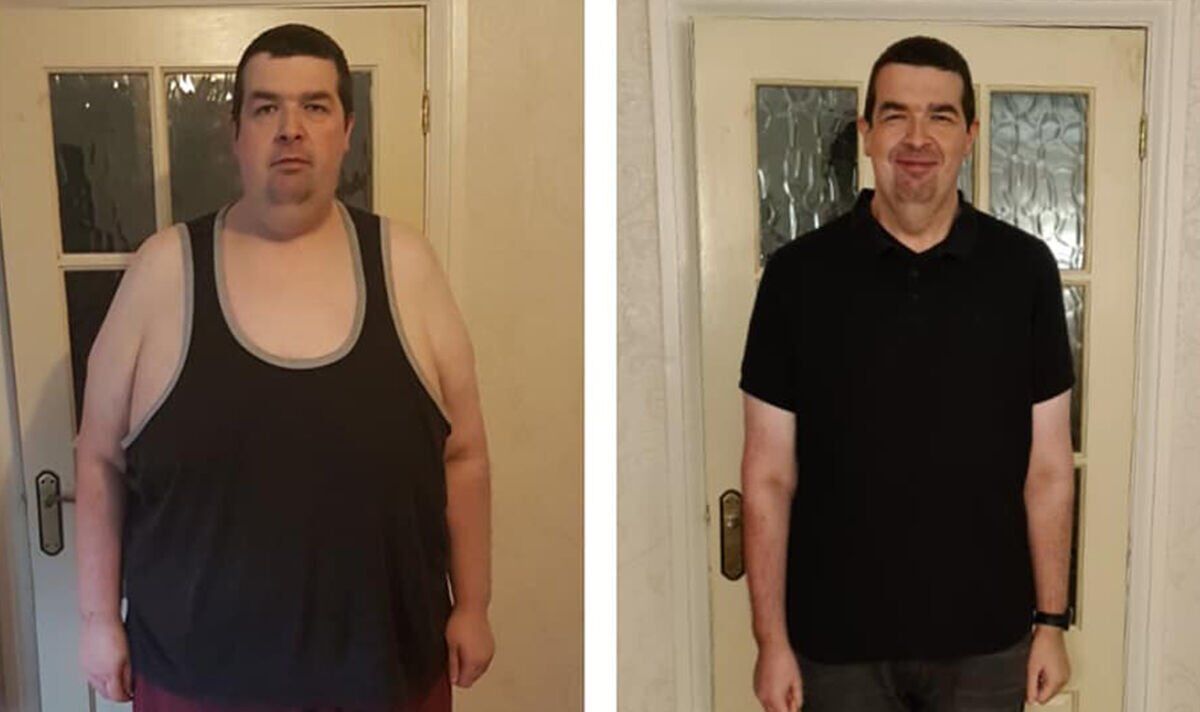 Asthma: St John Ambulance explain how to help during attack

Now having turned his life around, Hughes is sharing his story in an attempt to show that obesity is a disease like any other and the importance of exercise for those with chronic lung conditions. Having lost a whopping 13 stone, Hughes is gearing up to run the Great North Run, taking place in October. The manager is running it on behalf of UK-leading charity Asthma + Lung UK which supported him on his weight loss journey and provided advice on how he could control his asthma by following a healthier lifestyle.

Hughes could barely walk, let alone run before he began his fitness and weight loss journey, and was repeatedly told by his doctor that he needed to lose weight if his asthma was ever to improve.

Sharing his story exclusively with Express.co.uk, Hughes said: “I knew that, of course – but nobody chooses to be obese, that would be crackers. It’s a condition, and a state of mind just like anything else.

“As a child, asthma had completely ruled my life and I was often hospitalised. In fact, it was so bad, that between the ages of eight and 13, I was on repeated heavy doses of steroids to try and keep my breathing under control.

“I could never knock steroids, as they helped to keep me alive, but the downside was that they did cause me to put on quite a bit of weight.

“At times my asthma was fairly severe and required a lot of medical attention. I remember a good few call outs of doctor visits and needing to go to hospital for medication. My asthma stopped me from being involved in quite a bit of physical activity and I’d tire quickly.”

Having to battle between looking after his asthma and not putting on weight, Hughes was subject to bullying, always being known as the “fat kid”. It is for this reason that he now wants to show that obesity is a disease that requires proper treatment and support.

He continued to say: “At school, I was always the fat kid who couldn’t keep up with anyone else.

“There was quite a bit of bullying, and I used to absolutely dread swimming lessons and often used to forget my PE kit on purpose.”

The bad experiences he suffered as a child stayed with him until he was an adult and it wasn’t until 2019, when his son Jack turned three that he realised if he didn’t make some drastic changes and lose weight he would never be able to become a “proper dad”.

He said: “As an adult, my asthma improved a little, but I was always the biggest person in the room, and assumed that having a lung condition meant I couldn’t be active and enjoy exercise.

The first step Hughes took was to enroll on a private 12-week weight loss programme with a company called On Health, and remarkably, despite “profound breathlessness” his only other health issue was off-the-scale blood pressure.

High blood pressure rarely causes any noticeable symptoms, but it puts an individual at risk of some serious health problems including heart attacks and stroke, making it a severe condition that needs to be regularly monitored.

After completing the course, which included dietary advice and group exercise classes, Hughes was determined to keep up with his new healthy lifestyle, which is why he started to run.

At first he started running two to three kilometres a day which he found very difficult and was still struggling with breathlessness. But despite the fact he had to stop on every run, and almost always needed his inhaler he kept pushing on, completing the distance every time.

“I used to think exercise could kill me, but the truth is that running has been the best thing I could have done for my asthma and it has enhanced my life in ways I didn’t think were possible. I’m a different person now, and I feel so positive and powerful,” Hughes added.

Having championed running, he has also completely transformed his diet by becoming “less chaotic about food,” and introducing meal plans rather than relying on last minute cakes, biscuits and takeaways because he was so busy.

Now Hughes is able to run 10 kilometres three times a week and rarely needs to use his inhaler. In addition, the IT manager also looks completely different physically. He says running has completely transformed his life, restoring his health and allowing him to play football with Jack and be the father he wants to be, and he can’t wait to compete in the Great North Run.

He is thrilled to be able to provide such a “good example to his son”.

Although asthma may stop individuals from doing activities they love, Dr Andy Whittamore, clinical lead at Asthma + Lung UK, claims that physical exercise might be a sure way to help the common lung condition.

He shared with Express.co.uk: “Although exercise can sometimes be a trigger for some people with asthma, there are major benefits of exercise and being active for people with lung diseases. Exercise can be useful in helping control people’s weight – for someone who is overweight or obese losing weight reduces the risk of asthma symptoms and asthma attacks.

Asthma + Lung UK is the leading UK charity supporting everyone with a lung condition and fighting for everyone’s right to breathe. It is calling for the Government to invest more research into lung conditions. For information and support visit asthmaandlung.org.uk or call the helpline on 0300 222 5800.