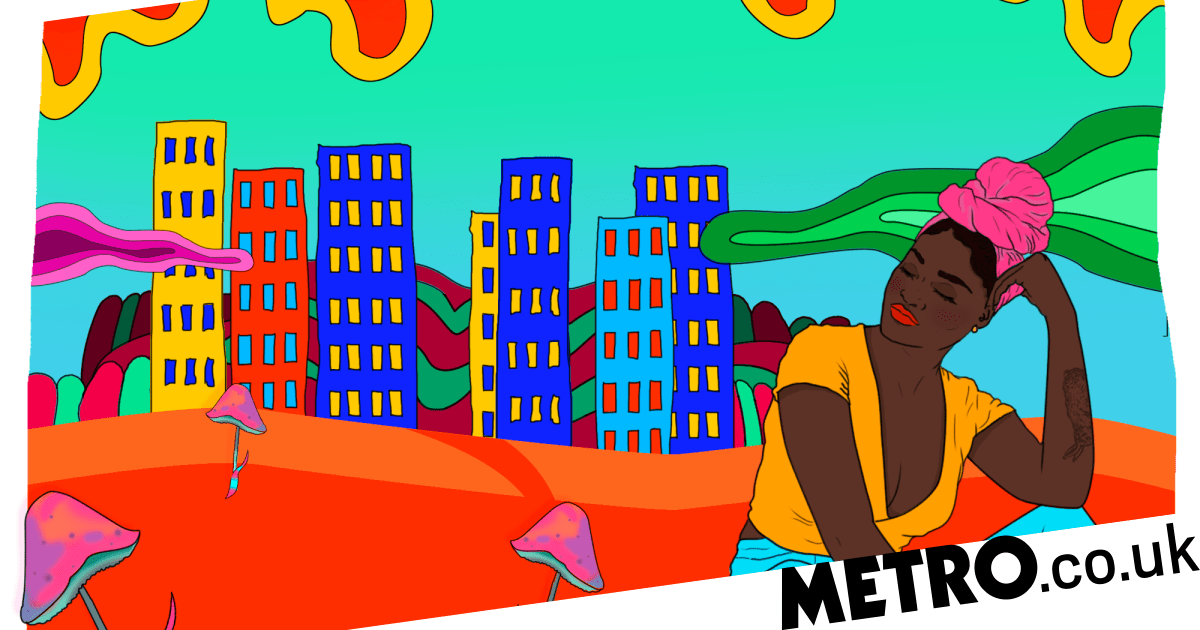 ‘It’s been a total godsend to me during this time, I actually don’t think I could have coped without it,’ says Marina*.

Lockdown has seen many of us turn to crutches – alcohol, cigarettes or junk food – but for this 31-year-old event manager from Walthamstow, it’s been mushrooms. The psychedelic kind.

Every three days, Marina puts one pipette drop from a small brown bottle of mushroom tincture – that she bought for £200 from ‘a friend of a friend’ – on to her tongue.

‘It’s not like taking a big trip,’ she says. ‘Like, I’ve taken acid at festivals before, and it’s not as intense as that, but I’ve found that it’s helped to calm down the chatter in my head.

‘I think it’s definitely given me moments of calm when it’s all got a bit too much, and when I’ve needed to work, it’s actually given me a bit more focus.

‘It never really crossed my mind to try microdosing before, but then this isn’t exactly how I’d pictured 2020 going down.’

Marina isn’t the only one experimenting with psychedelics in lockdown. Behind closed doors in our three-months-and-counting pandemic quarantine, there’s been a resurgence of people who have been experimenting with the fungi. Despite the ubiquitous silver-bullet canisters of laughing gas found all over streets and parks across the UK, it’s magic mushrooms that appear to have become the drug of choice.

While some people – including Marina – have been inspired by American psychologist James Fadiman’s 2011 book, The Psychedelic Explorer’s Guide, which explains the process of microdosing (taking miniscule amounts of a drug every few days to enhance cognitive function), other people are using the drug more recreationally.

‘There’s been loads of times, especially around the beginning of the lockdown, where I felt like I just wanted to take something that would lift me out of it all,’ Corinna*, 28, says. She has been taking powdered mushrooms mixed with chocolate when she meets up with friends in Battersea Park.

‘My anxiety has been through the roof recently, I had been using CBD products, but it felt like they weren’t really doing anything for me anymore. The shrooms have been great – everything gets a bit wavy and it’s the only time I can remember laughing in months. It feels like such a release, just for a few hours.’

Mushrooms – at least those containing the psychoactive substance, psilocybin – have been illegal in the UK since 2005, but have been prevalent in civilisations for thousands of years. Ingesting them can cause giddiness, euphoria and hallucinations, and were used by the indigeneous people of Mesoamerica to rituals of the Aztecs, who called it ‘the divine mushroom’.

In 1958, Swiss scientist Albert Hoffman discovered that it was the psilocybin that made these mushrooms so magic. Similarly to when he first took the acid LSD, he noted ‘in a dreamlike state, with eyes closed, I perceived an uninterrupted stream of fantastic pictures, extraordinary shapes with intense, kaleidoscopic play of colours’. He was transported to another place; what we’ve all dreamed of while under Corona quarantine.

In the ‘60s, these psychedelic drugs became central to the US counterculture and as part of the ‘turn on, tune in, drop out’ hippie generation. It was in fledgling studies at this time that first began to link psychedelic drugs’ beneficial effect on people suffering from anxiety, PTSD, depression, addiction, and other mental health issues.

However, in 1971, President Nixon declared his war on drugs, leading all acid and psilocybin-based products to also be banned and classified as Class As, alongside heroin and crack cocaine, as being dangerously harmful and of no medical benefit. The UK followed suit in the same year.

50 years on, the science and health industries have picked up again on this important research. This includes studies on psychedelics at London’s Imperial College and in 2006, a report from Baltimore’s Johns Hopkins research centre found that taking a fraction of a regular dose of psilocybin can lead to feelings of ‘substantial personal meaning and spiritual significance’.

Since then, Silicone Valley leaders have become switched on to the idea of psychedelics and microdosing for ‘optimising their health, and even Gwyneth Paltrow’s The Goop Lab series included a trip to a mushroom therapy retreat in Jamaica.

People are confidently dabbling in these mind-altering substances once again – 14.8% of 2019’s Global Drug Survey said they had taken mushrooms in the last 12 months, a figure that experts think looks set to rise dramatically as people begin to process this year’s traumatic world events.

‘It’s not surprising to me that people are turning to mushrooms during the pandemic,’ says David Badcock from Drug Science, the leading independent scientific body on drugs in the UK. ‘One reason is that people are locked indoors with nothing to do and want something to amuse themselves, so they might be taking them recreationally.

‘Also, the increased anxiety related to the pandemic and the uncertainty of everything in the future also means that many people might be using psychedelics to relieve their symptoms.

‘It’s largely anecdotal evidence at the moment, as there hasn’t been a huge amount of research done yet, but it shows that microdosing has a positive impact on people’s anxiety, stress levels and general mental health wellbeing. Even if it’s a placebo, if it’s having a positive effect, you could argue it’s working.’

At the beginning of the UK’s lockdown, the ONS found that 49.6% of those polled were experiencing high levels of anxiety. Another study showed that 80% of people working from home felt that the quarantine had caused a negative impact on their mental health. As face-to-face therapy sessions turned to online chats instead, the relentless news cycle became emotionally exhausting. People felt increasingly isolated and began to explore alternatives to their usual self-care methods.

Jess*, 33, says: ‘I live on my own and felt myself sliding into a dark place when we weren’t allowed to see anybody else. I couldn’t work out if my weekly Zoom chats with my friends were actually making me feel worse afterwards, as it’s just not the same as seeing everyone in person.

‘My weed dealer started selling mushrooms as well, so I bought some and made them into a herbal tea and had it one night when we were doing an online birthday party for one of my friends.

‘It’s hard to describe, but I just felt this real rush of empathy for everyone, I felt like I was really connected with them again. I didn’t feel so lonely or empty. Things seemed a bit more optimistic for me again.’

Hattie Wells, director of Breaking Convention, a biennial global conference on the research into psychedelic substances, explains how the drugs can work: ‘I believe that psychedelics offer a completely different way of looking at, and trying to treat, mental health conditions.

‘They seem to have the ability to reset certain entrenched responses and patterns of rumination, while also allowing the patient an insight into how these patterns and negative ways of responding to circumstances became bedded in. Understanding one’s condition allows for greater longer-term healing.’

Although mushrooms can sometimes have side effects such as paranoia or flashbacks for some people, Badcock says: ‘Psychedelics are far safer than alcohol. There are many harms associated with alcohol use, from a health, societal and dependence point of view. You don’t take psychedelics then go out and have a fight and end up in A&E.’

Badcock, Drug Science and others are calling for mushrooms and other psychedelics to be declassified and decriminalised to allow for future therapeutic use. However, he adds: ‘You don’t just take the drug and it sorts out all your problems, it needs to be part of a therapeutic package. We don’t advocate doing mushrooms recreationally, but advise it as part of a therapeutic session with psychosocial support. Once the scientific evidence is confirmed, we would love to see the NHS use it as part of the way they treat certain health issues.’

Wells believes that with more trials underway, ‘we’re not more than five years away from away from licensed psilocybin therapy in the UK’. She adds: “Magic mushrooms are being decriminalised in a couple of American cities, which is how cannabis decriminalisation started over there. However, the UK has been dragging their heels severely. It will be slow, unfortunately, but change is coming.’

Marina can’t wait that long, and says she plans to continue with the microdosing, even after lockdown ends: ‘I’m worried my anxieties might flare up again, but since taking them, I’ve noticed a really positive effect on my mood and outlook. Why would I stop when I’ve found something that works for my own health?

‘It doesn’t really bother me that they’re illegal. I think everyone’s got bigger concerns than people taking some magic mushrooms at the moment.’

*Names have been changed