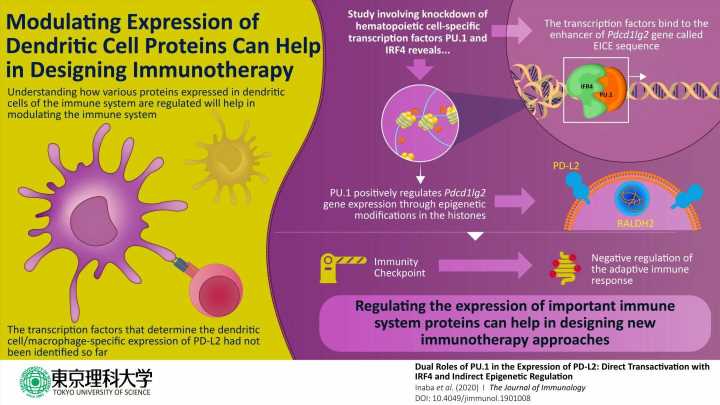 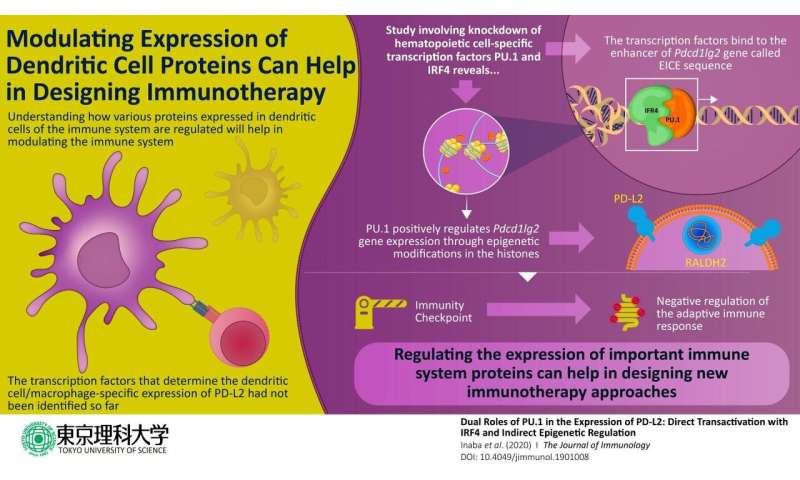 In immune-related disorders, therapy often involves identifying the molecules responsible for immune dysregulation and targeting them using drugs. This type of immune therapy is also used for cancer treatment, owing to the important role that immune cells play in cancer progression. One such type of a potential therapeutic target is an immune checkpoint protein called PD-L2, which is specifically expressed in immune cells called dendritic cells (DCs) and macrophages. PD-L2 plays various important functions in the regulation of different types of immune cells, including the suppression of T cells. Not surprisingly, this molecule has been extensively explored as a target protein in immunology and cancer immunology. But, despite years of research, exactly how this protein gets regulated has remained unclear until now.

Recently, a group of researchers at Tokyo University of Science, led by Professor Chiharu Nishiyama, made a significant leap towards this direction. In a new study published in the Journal of Immunology, the scientists dug deeper into the genetic and molecular basis of PD-L2 regulation. Prof Nishiyama says, “In our study, we investigated the gene expression mechanism of PD-L2, a cell-surface molecule that is specifically expressed in DCs and macrophages.”

The scientists began by focusing on DCs, which train other immune cells such as T cells to initiate a defense response against foreign molecules and cancer cells. In DCs, PD-L2 acts as a ‘checkpoint’ that ensures that the immune cells do not incorrectly destroy healthy cells. Because the gene “Pdcd1lg2” is responsible for coding the PD-L2 protein, the scientists wanted to understand how this gene is regulated. A gene expresses its encoded protein through a series of coordinated cellular events that includes structural changes in the DNA caused by proteins known as transcription factors, which bind to specific regulatory positions on the DNA. As the scientists wanted to know the exact events in PD-L2 regulation, they designed their experiments focusing on factors that regulate Pdcd1lg2. Previous studies had indicated that a transcription factor called PU.1 was involved in the development of other similar immune cells. The scientists wondered: was PU.1 involved in PD-L2 expression, too? Prof Nishiyama explains, “Previous studies had shown that the artificial expression of PU.1 on non-dendritic immune cells transformed these cells into DCs. This made us think if PU.1 had any role in the expression of PD-L2, one of the prominent surface proteins of DCs.”

To begin with, the scientists studied the effect of knocking down PU.1 and a few other proteins in cell models. They found that in the absence of PU.1 and its associate molecule IRF4, the expression of PD-L2 was severely compromised. Once it was clear that PU.1 and IRF4 were involved in regulating the expression of PD-L2, the scientists carried out subsequent experiments using techniques such as chromatin immunoprecipitation to know exactly how this happens. They found out that PU.1 and IRF4 together bind to a region on the DNA called the “EICE sequence” and stimulate the expression of Pdcd1lg2 gene. It also became clear that PU.1 indirectly plays a role in altering the DNA molecule to a “relaxed” form by inducing chemical changes in the “histone” proteins, which are bound to the DNA in its “condensed” form. These chemical changes are also called “epigenetic modifications” and form an important regulatory mechanism for gene/protein expression in these cells.