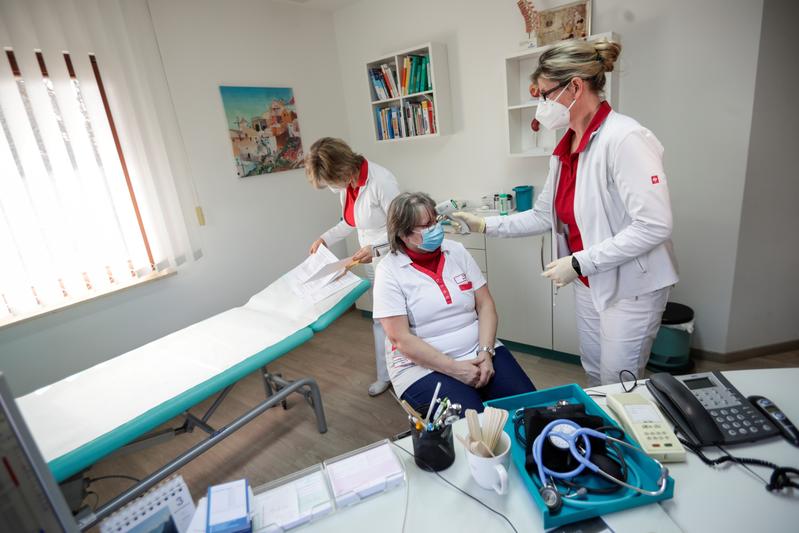 BERLIN (Reuters) – Far more people in Germany will get a coronavirus vaccination from April when family doctors start giving them but the idea that 25% of the population can get a shot in just a month is unrealistic, Health Minister Jens Spahn warned on Wednesday.

FILE PHOTO: A health worker checks the temperature of the nurse before vaccination, in the state of Brandenburg where the first coronavirus vaccinations are given in doctors’ surgeries, in Senftenberg, Germany, March 3, 2021. REUTERS/Hannibal Hanschke/Pool

Germans are growing frustrated over a sluggish vaccination roll-out. Only around 6.4% of the 83 million population have received at least a first dose against the coronavirus, far behind countries like Britain, Israel and the United States.

Critics blame German bureaucracy and slow decision-making as well as an over-reliance on European Union approval and supply deals.

Spahn said the rate would increase from April, when family doctors are due to start administering doses at their surgeries.

“But the vaccination numbers will not immediately grow to 20 million a month or to 10 million a week,” he told ZDF television. “In April there will be significantly more vaccinations, but not on that scale.”

A government spokesman said later that Germans could expect up to 10 million doses to be administered per week by June, but not by April.

“In this first quarter we will get the expected and agreed deliveries, even a little more. For the second quarter, the delivery volumes will then grow steadily and it is important to have realistic expectations,” spokesman Steffen Seibert said.

The head of the KBV doctors’ association said surgeries could administer about 5 million vaccinations a week and urged the government to let them get on with it.

“Just let us vaccinate, make the vaccine available to us through pharmacies and don’t kill us with bureaucracy,” said Andreas Gassen.

He complained that a “German tendency to want to win the Oscar for bureaucracy” was slowing things down. “We should not want to regulate everything down to the last detail.”

There is still no final agreement on family doctors being able to carry out vaccinations.

As Europe weighs producing and using Russia’s Sputnik V vaccine to speed up its roll-out, the head of a German expert panel backed the idea.

“This is a good vaccine, which looks like it will be approved in the EU at some point,” Thomas Mertens, head of the STIKO vaccine use panel, told the Rheinische Post daily.

Germany has started to ease some lockdown restrictions even though infections are rising again. By Wednesday, the number of coronavirus cases had risen to more than 2.5 million. More than 72,000 people have died.