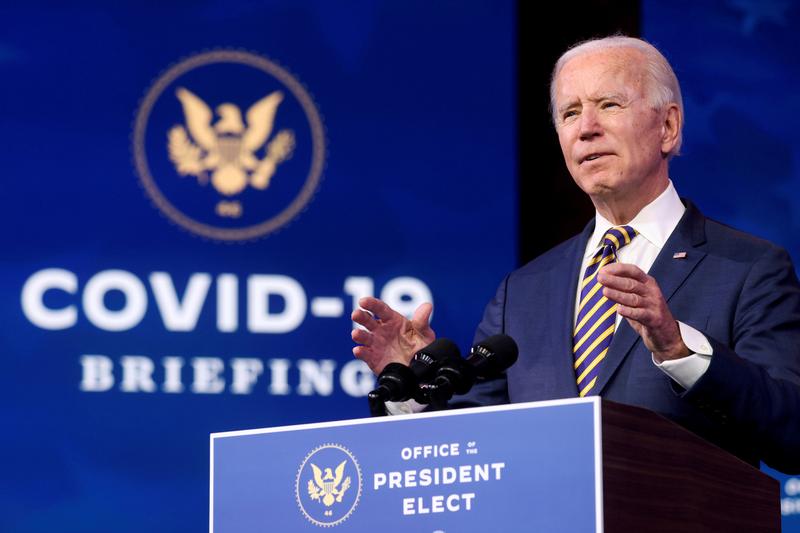 WASHINGTON (Reuters) – The Democratic-led U.S. House of Representatives prepared to take the first step forward on President Joe Biden’s $1.9 trillion COVID-19 relief package on Tuesday, with a key vote expected to fast-track the measure through Congress.

A fiscal 2021 budget measure, with coronavirus-related spending instructions for congressional committees, headed for a House vote that would help unlock a legislative tool needed for Democrats to enact Biden’s package swiftly in the face of Republican opposition.

Republicans have pushed back on the $1.9 trillion price tag of Biden’s proposal, which comes on top of $4 trillion in COVID-19 aid last year. On Monday, the president met with 10 Senate Republicans to discuss their own scaled-back $618 billion plan. He told lawmakers it did not go far enough to address a pandemic that has killed nearly 444,000 Americans.

“He will not slow down work on this urgent crisis response, and will not settle for a package that fails to meet the moment,” White House spokeswoman Jen Psaki said afterward.

Jared Bernstein, a member of the White House Council of Economic Advisers, said on Tuesday that the Republican proposal fell far short in a number of areas, including funding to reopen schools. Republicans called for spending $20 billion on schools, vs. Biden’s proposal for $170 billion.

Biden’s package faces a potential Republican roadblock in the 100-seat Senate, which is divided 50-50 but requires a 60-vote threshold to pass most legislation.

The budget resolution, if approved by House and Senate, would activate a legislative tool called reconciliation, allowing for Senate passage with 51 votes from 48 Democrats, two independents who caucus with them, and Vice President Kamala Harris.

That would mark the first time congressional Democrats have used the maneuver to flex their legislative muscle since winning their razor-thin control of the Senate in two runoff elections last month in Georgia.

The House was expected to take up the budget resolution during votes tentatively scheduled to begin at 6:30 p.m. EST (2330 GMT).

But Biden’s COVID-19 agenda could also be slowed by partisan politics as the Senate moves toward a Feb. 9 impeachment trial of former Republican President Donald Trump, who faces a charge that he incited insurrection with a fiery speech to supporters just before hundreds of them stormed the Capitol on Jan. 6.

The prospect of a reconciliation vote has drawn criticism from Republicans who view the strategy as a partisan gambit that undermines Biden’s call for unity and bipartisanship in the aftermath of the Capitol riot, which left five people dead.