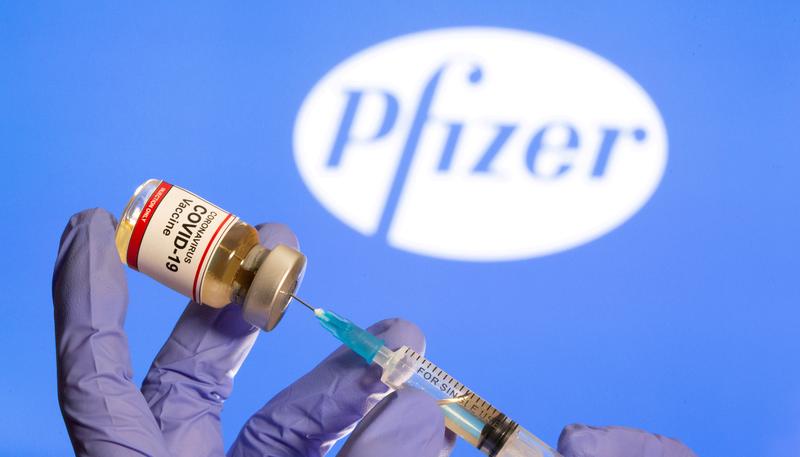 JOHANNESBURG (Reuters) – Scientists will meet on Thursday to advise South Africa’s government on its next steps after a study suggested the dominant local coronavirus variant may reduce antibody protection from Pfizer’s COVID-19 vaccine by two-thirds.

FILE PHOTO: A woman holds a small bottle labeled with a “Coronavirus COVID-19 Vaccine” sticker and a medical syringe in front of the displayed Pfizer logo in this illustration taken, October 30, 2020. REUTERS/Dado Ruvic

The laboratory study, published in the New England Journal of Medicine, dealt a new blow to the country hardest-hit by the pandemic on the African continent.

The government and its advisers must weigh whether to wait for vaccines that might be more effective against the more infectious 501Y.V2 variant, or try to vaccinate people quickly to avert further infections and deaths.

South Africa had been counting on the Pfizer shot, developed with German partner BioNTech, to step up its vaccination programme after administering the first Johnson & Johnson (J&J) doses on Wednesday.

Earlier this month, it placed AstraZeneca vaccinations on hold because of interim data showing its jab offered minimal protection against mild to moderate illness from the 501Y.V2 variant first identified late last year.

Officials are more confident about the J&J shot because it was shown to be effective in preventing severe illness in the local leg of a large global trial.

Scientists said that because the new study’s findings come from a laboratory, it is not easy to extrapolate what they might mean for the shot’s efficacy in the real world.

“Our scientists will be meeting to discuss it (the study) and they will advise the minister,” health ministry spokesman Popo Maja said.

Barry Schoub, a professor and chair of the Ministerial Advisory Committee on vaccines, said the committee would discuss the study alongside information on other COVID-19 vaccines.

Asked to comment on the findings, he said: “The Pfizer vaccine is enormously effective at 95%, so even if there is quite a significant reduction there still will be quite a bit of remnant efficacy left.”

“It is very likely that it will protect to a reasonable extent, certainly against severe illness and mild to moderate to some extent,” he said.

Richard Mihigo, an immunisation official at the World Health Organization’s Africa office, told a news conference the antibody response to the variant in the Pfizer study was “strong enough”.

Linda-Gail Bekker, co-lead investigator of the South African arm of J&J’s global trial, said she would recommend rolling out the Pfizer vaccine but monitoring it in the same way as the J&J shot, which is being administered in an “implementation study” targeting up to 500,000 health workers to further test it in the field.

“We should make sure we do see the effectiveness we (are) hoping for,” she told Reuters.

Health Minister Zweli Mkhize said on Wednesday South Africa was expecting 500,000 doses of the Pfizer vaccine initially and about 7 million doses by June.

A spokesman for regulator SAHPRA said Pfizer’s registration application was under review and declined further comment.

South Africa, with nearly 1.5 million cases and about 48,500 deaths, has recorded almost half the COVID-19 fatalities and over a third of confirmed infections in Africa. It lagged richer Western nations in launching its immunisation campaign.

The government plans to vaccinate 40 million people – two-thirds of the population.

“Luckily there are a range of vaccines available and what we will do is work with the national authorities to understand the implications of this (study) and see what they need to do,” the WHO’s Africa director, Matshidiso Moeti, said.