Passengers on a Caribbean cruise may have saved a man’s life after they donated blood when he fell seriously ill on board.

The American 68-year-old, who has not been identified, had to be evacuated by helicopter from the ship on New Year’s Day.

When he became ill the captain of the ship put out a call for passengers to donate blood. Sixty people came forward, a holidaymaker on board said.

The US Coast Guard then flew out to the Queen Mary 2 cruise liner and took the man and his wife back to a hospital in San Juan, Puerto Rico.

His illness is unknown but his condition was described as stable when he had been given a transfusion of blood from other passengers. 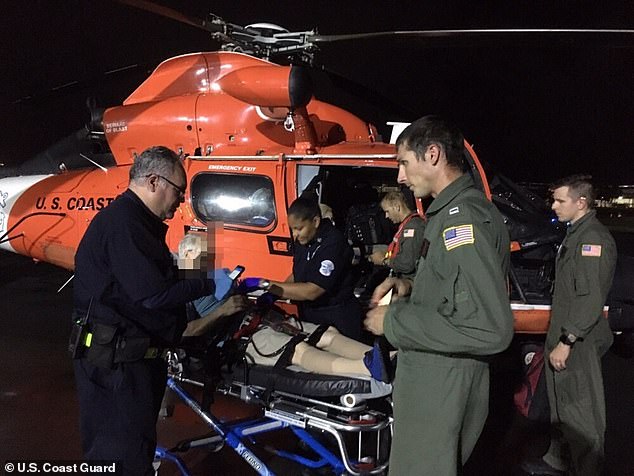 US Coast Guard crew evacuated the unidentified man from the ship on a helicopter and took him to the closest hospital, which was in Puerto Rico some 300miles away 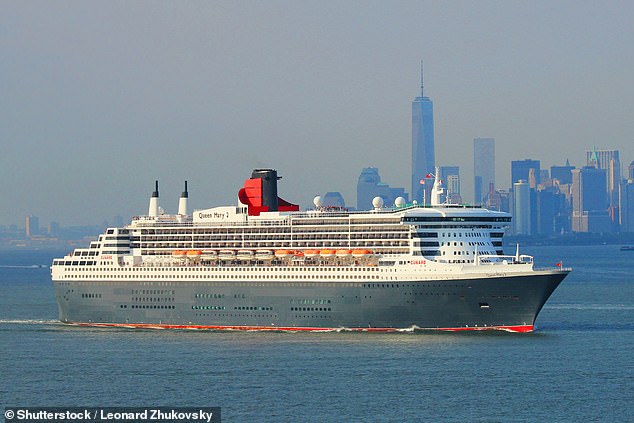 The man was on board the 2,691-passenger Queen Mary 2 cruise liner while it was travelling through the Caribbean on its voyage from Southampton to New York (Pictured: The ship in New York in 2014)

One passenger, Bob Johnson from Suffolk, England, told The Telegraph: ‘The captain asked for blood donors with the right blood group and more than 60 people volunteered.

‘We were told the condition of the ill passenger was stabilised with a transfusion and then they were picked up by American coastguard helicopter and flown to the nearest hospital, which was in Puerto Rico.’

It is not known what illness the man was struck down with, but blood transfusions are given to patients when they have a shortage of red blood cells.

A blood transfusion is a procedure in which a patient who has lost blood or does not have enough oxygen in their own blood is given someone else’s.

It works by drawing blood from the healthy patient, making sure it doesn’t have diseases such as HIV or hepatitis, then injecting it into the sick person.

A donor and a recipient must have the same blood type – the main groups are A, AB, B and O – but O-negative blood can be given to anyone.

Reasons people might need a transfusion include blood loss from a serious injury or internal bleeding from a ruptured stomach ulcer, for example; leukaemia or chemotherapy which damages the blood cells; or a blood disease such as sickle cell disease or thalassaemia.

Blood transfusions are common and very safe, the NHS says, but can trigger allergic reactions. Recipients are not allowed to donate blood afterwards.

This may be caused by a physical injury or internal bleeding caused by something such as a burst stomach ulcer.

People may also need blood transfusions if they have leukaemia or are having chemotherapy, or a blood-specific condition such as sickle cell disease or thalassaemia, according to the NHS.

Transfusions involve taking blood from a live, healthy donor, checking it doesn’t contain diseases such as HIV or hepatitis, then injecting it into a sick patient.

A donor and a recipient must have the same blood type – the main groups are A, AB, B and O – but O-negative blood can be given to anyone.

The man needed ‘immediate medical attention’ at a local hospital as soon as he landed in San Juan, Puerto Rico, the US Coast Guard said.

The passenger was treated by in-house medics on board the cruise liner, operated by luxury holiday company Cunard, which has its own medical centre.

He had been on a 26-day cruise from Southampton to New York via the Caribbean. Prices for this year’s running of the cruise start at £3,420 per person. 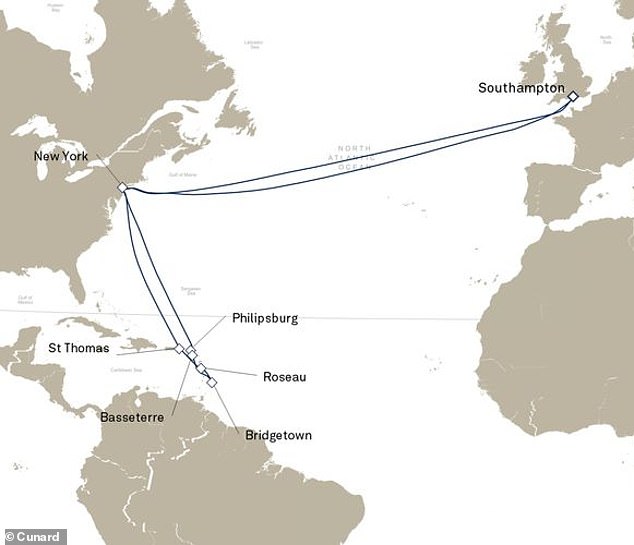 The Queen Mary 2, which can carry almost 2,700 holidaymakers at a time, was on a 26-day voyage from Southampton to New York and back, via the Caribbean, for which tickets cost more than £3,400 per person

A Coast Guard crew did ‘multiple hoists’ to get the man and his wife off the Queen Mary 2 at 2pm local time on Wednesday, according to the emergency service.

One of the crew members, Adam Tootle, said: ‘I am happy that were were able to help the patient and his partner make it safely to the hospital.

‘The training we complete prepared us well for this mission and for my first successful live hoist.’

MailOnline has contacted the cruise operator, Cunard, for comment.