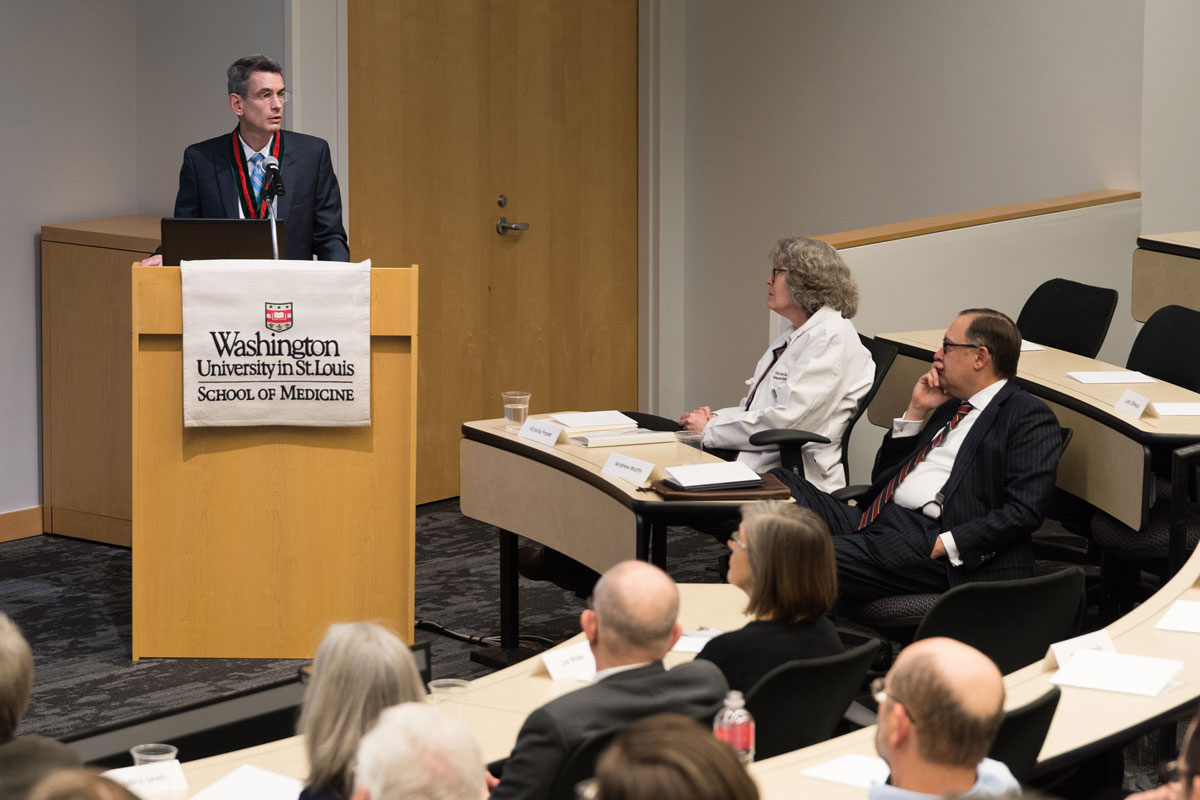 Matthew J. Walter, MD, has been named the inaugural Edward P. Evans Endowed Professor of Myelodysplastic Syndromes at Washington University School of Medicine in St. Louis. These syndromes make up a group of rare blood disorders that prevents the body from making sufficient healthy blood cells.

Walter, an international leader in the study and treatment of myelodysplastic syndromes (MDS), is a professor of medicine and director of the Edward P. Evans Center for Myelodysplastic Syndromes at the School of Medicine. The endowed professorship and the center are supported by funding from the Edward P. Evans Foundation, established in 1984 by Edward Parker Evans, a businessman and philanthropist whose foundation supports MDS research nationwide. He died in 2010 from a blood cancer related to MDS.

“Matthew Walter has devoted his career to the study and treatment of myelodysplastic syndromes, and it is a great pleasure to be able to honor his work and commitment to his patients in this way,” Martin said. “There is no one better suited to lead this center. This endowed professorship will help support his work to understand the genetic and environmental underpinnings of this disease so that researchers can understand how it develops and work toward developing improved precision therapies to prevent or treat MDS.”

Some 40,000 Americans are diagnosed with MDS each year. The symptoms can be vague, including shortness of breath and fatigue, which makes it difficult to diagnose. Low blood cell counts are among the first signs of the disease, and patients are diagnosed based on the appearance of abnormal blood cells. MDS can be fatal, but some patients with low-risk MDS live for many years with the disease and never know they have it. About one-third of patients with MDS develop an aggressive form of the disease that progresses to acute myeloid leukemia (AML), which is a fast-growing blood cancer. Without a successful stem cell transplant, AML is fatal.

Walter is interested in studying patients at risk of developing MDS but who don’t yet have the disease. Such patients have mutations in a few important genes linked to MDS but don’t yet have symptoms. This condition is called age-related clonal hematopoiesis. Even though relatively few of these patients go on to develop MDS, studying this group of patients could help doctors understand the differences between those who develop MDS and those who don’t.

“The work that Matthew Walter is leading at the new Edward P. Evans MDS Center, including his work with patients, is the epitome of precision medicine,” Perlmutter said. “This research will help illuminate what leads patients to progress to MDS or more aggressive blood disorders. His vision includes developing ways to prevent this progression, as well as novel therapies, including immunotherapy strategies. It is a great pleasure to recognize the innovative work Matthew Walter is doing to better care for these patients.”

Said Victoria J. Fraser, MD, the Adolphus Busch Professor of Medicine and head of the Department of Medicine: “Matthew Walter is a leader in the field in harnessing his lab’s research discoveries for the benefit of his patients. This professorship will help him continue his important research into the origins of this disease and potential ways to prevent and treat it.”

Walter earned his bachelor’s degree in 1990 from American University in Washington and his medical degree in 1995 from Saint Louis University School of Medicine. He was a research scholar at the Howard Hughes Medical Institute and later completed his internship and residency at Johns Hopkins Hospital. He came to Washington University as a hematology-oncology fellow and joined the faculty in 2004. 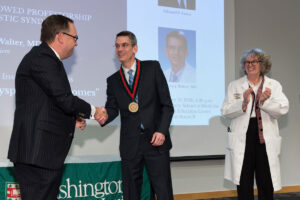 Edward Parker Evans ran Spring Hill Farm, the largest thoroughbred breeding farm in Virginia. Since his death, the Edward P. Evans Foundation has supported cutting-edge translational research on MDS at leading institutions across the country, including Washington University, which is noted for its innovative research and leadership in developing new therapies for patients with cancerous disorders of the blood.