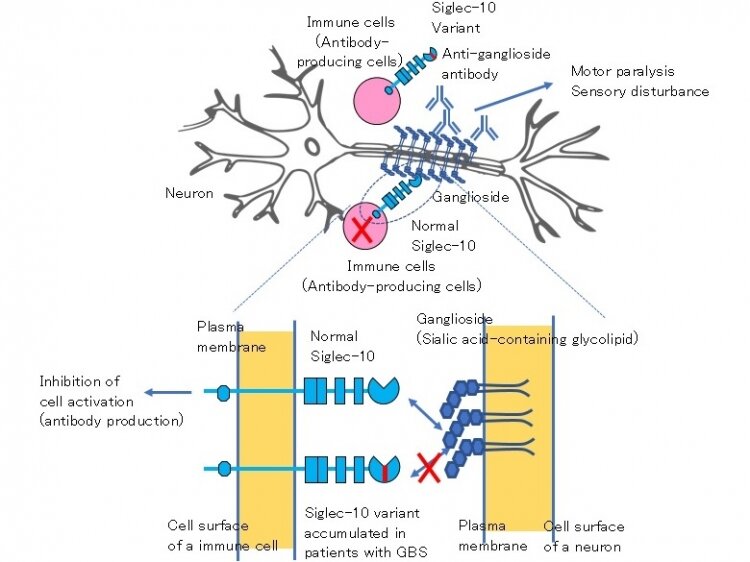 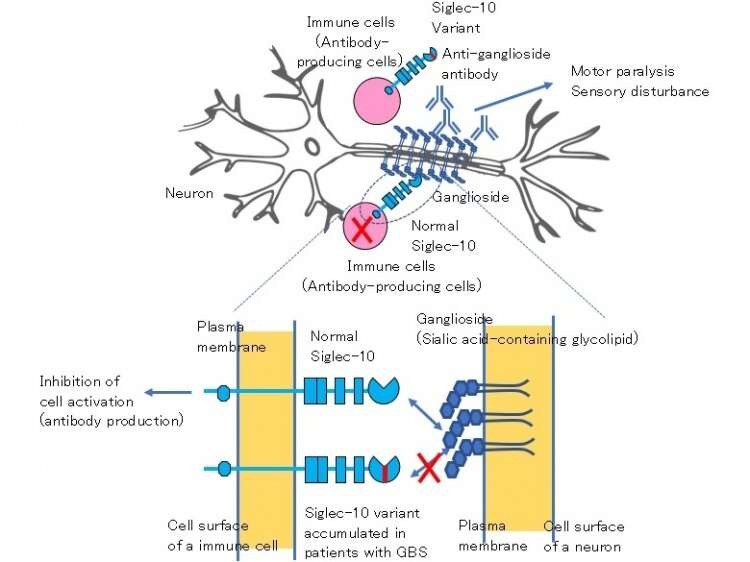 Guillain-Barré syndrome is an infamous autoimmune neuropathy, yet genetic variants predisposing individuals to this disease have yet to be described. In a new study, researchers from Tokyo Medical and Dental University (TMDU) discovered two novel genetic variants in a protein made by antibody-forming immune cells, providing a mechanism for the development of the disease.

The body’s immune system is supposed to fight off invaders; however, in autoimmune diseases this defense goes rogue and attacks the host instead through the production of autoantibodies. Guillain-Barré syndrome (GBS) is an acutely developing, autoimmune peripheral neuropathy that leads to muscle weakness and numbness. It is based on the production of autoantibodies against gangliosides, a specific type of lipid molecules on the membranes of cells of the nervous system, which in turn damage those neurons and result in polyneuropathy. That is, damage to multiple peripheral nerves that may cause muscle weakness and numbness. GBS is often preceded by an immune stimulation such as an infection. Indeed, infection with the bacterium Campylobacter jejuni, causing a diarrheal illness, is the most common event before GBS develops. However, as not all patients with this bacterial illness then develop GBS, it has long been thought that genetic variants (small differences in the DNA between individuals) may be what predisposes patients with GBS to the polyneuropathy.

“GBS remains somewhat of a medical mystery. We do not fully understand why patients develop this disease,” says corresponding author of the study Professor Takeshi Tsubata. “The goal of our study was to identify genetic variants in patients with GBS and provide a potential mechanism for the production of autoantibodies that lead to the development of polyneuropathy in these patients.”

To achieve their goal, the researchers focused on the protein Siglec-10. Siglec-10 is produced by B lymphocytes, a specific type of immune cell that produces antibodies, and binds to gangliosides. The researchers hypothesized that Siglec-10 may play an inhibitory role in the production of antibodies against gangliosides, and in turn that genetic variants in Siglec-10 may diminish this inhibitory role and thus facilitate the development of GBS. By analyzing the DNA sequence encoding for the protein Siglec-10 in patients with GBS, the researchers identified two rare variants that change the amino acid sequence in the protein in GBS patients. There were no patients with only one of the two variants probably because these two variants are located very closely in the Siglec-10 gene.

The researchers then made the GBS-specific Siglec-10 protein in the lab to understand how it differs from the normal Siglec-10 protein at the molecular level. They found that only one of the two variants was responsible for the deleterious effects of the alternate protein, causing a marked alteration in the molecular structure of the protein and in turn a significant impairment of the protein to bind gangliosides.