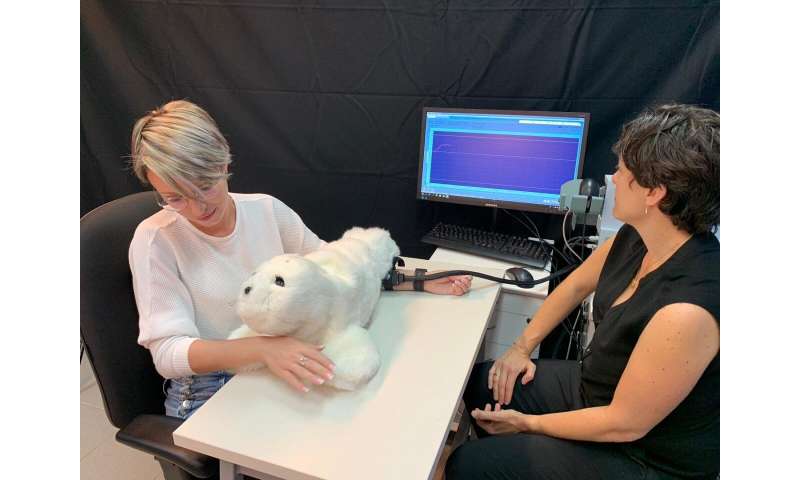 Could furry social robots help bolster moods and reduce pain when human to human contact isn’t an option, for example, during a pandemic?

According to a new study by Ben-Gurion University of the Negev (BGU) researchers published in Scientific Reports, a one-time, hour-long session with a plush, seal-like social robot reduced pain and oxytocin levels, and increased happiness. The Japanese social robot, PARO, emits seal-like sounds and moves its head and flippers in response to being spoken to and touched.

Human-to-human contact has been found to bolster mood and reduce pain in previous studies. Dr. Shelly Levy-Tzedek of the BGU Department of Physical Therapy and her team investigated whether a furry social robot could induce similar effects when normal human-to-human contact is not available.

Levy-Tzedek and her team discovered that a single, 60-minute interaction with PARO actually improved mood as well as reduced mild or severe pain. When participants touched PARO, they experienced greater pain reduction than when it was simply present in their room.

Surprisingly, the BGU researchers discovered lower oxytocin levels in those who interacted with PARO than in the control group participants, who did not meet PARO. Typically, oxytocin, sometimes called “the love homone,” is elevated among romantic partners or mothers playing with their children, so a lower level of oxytocin wasn’t expected. However, more recent studies have shown that outside of close relationships, oxytocin production is a stress indicator and therefore, a reduction could indicate relaxation.