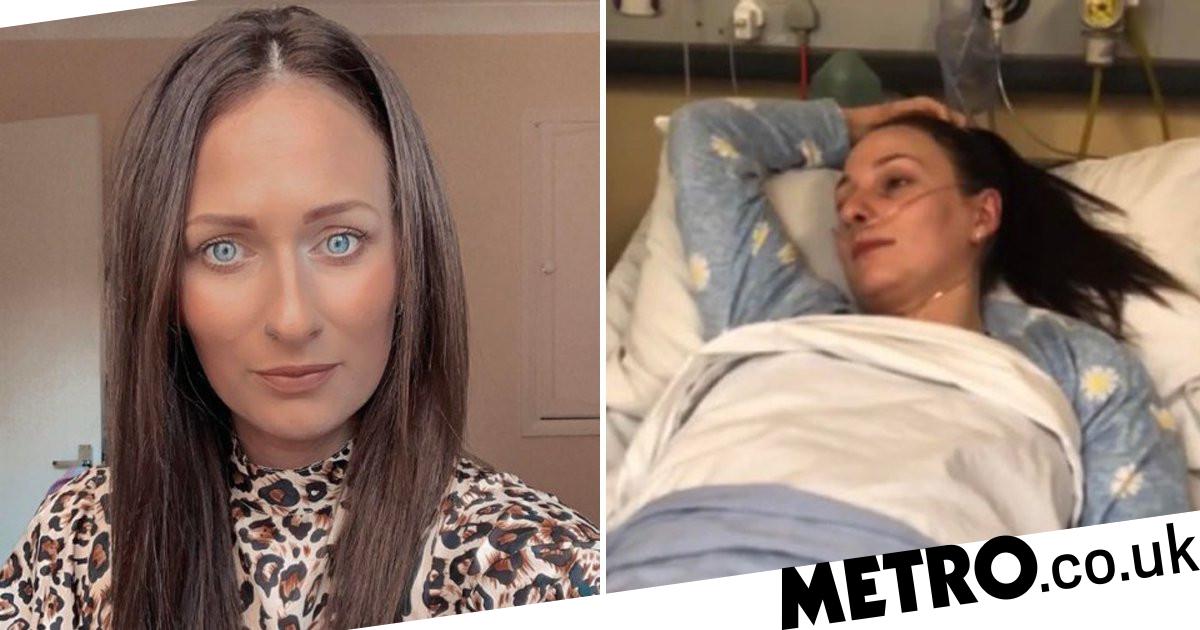 In August 2017, Amy Metters went numb from the waist down and went to hospital. There, she suffered her first cardiac arrest.

Since then, her heart has stopped and been restarted a further seven times – and doctors have no idea why it keeps happening.

Ten years ago on a hot summer’s day, Amy was diagnosed with postural tachycardia syndrome (PoTS), which causes an abnormal increase in heart rate after sitting or standing up.

The condition was brought on by a repeated viral infection, tonsillitis, which she had around five times in the space of a few months.

It means she often faints when she stands up – but doctors can’t find a connection between it and her cardiac arrests.

While Amy admits it is frightening, she remains positive and is blogging her way through her journey in the hope of helping others and raising awareness.

She explains: ‘I gave up hairdressing when PoTS started because I was passing out all the time, that was the main problem.

‘I had that fairly well under control. I then was a dental nurse and I lifted a really heavy chair at work and hurt my back. It was like it for weeks and I saw a physiotherapist and a chiropractor and had painkillers.

‘Then all of a sudden one night, I literally went numb from the waist down. I went into the hospital and really randomly my heart stopped.

‘No explanation, it just stopped.

‘They gave me CPR, broke a couple of ribs and while I was in there, I had another three, so I had four altogether while I was in hospital. My heart just stopping.

‘There was no real answer, at all. It’s not a kind of symptom of PoTS, there was no answer.’

After recovering, three months later, Amy travelled to Bristol with a group of friends for a concert and was enjoying the night with a few drinks.

She then began to feel unwell and knowing the signs, went outside. Next thing she remembers is waking up in an ambulance.

Amy’s heart stopped for a fifth time in the ambulance for three-and-a-half minutes.

She then travelled back from Bristol to Torquay, where she was then living, to get further care in Torbay Hospital.

In the queue for A&E, her heart stopped for the sixth time. Amy recovered and then did not experience another cardiac arrest until November 2019.

The 28-year-old was working at EE in Plymouth at the time when her heart stopped.

‘One of the first aiders gave me CPR and I was in hospital for a week,’ she said.

‘I’m really stubborn and I just get on with it, so I went back to work two weeks later part-time and I had another one at EE again.

‘It’s scary, I think I am very positive about it and people think I’m mad. I will make the odd joke about it but at the time, sleeping was an issue.

‘I was absolutely petrified to go to sleep in case I didn’t wake up, so it kind of affected things like that and not knowing what to do with work and I didn’t want to not work.

‘It has been hard, I can’t pretend it’s been easy.’

Amy has a PoTS consultant and has seen a specialist in London, but they cannot find a connection between it and the cardiac arrests.

‘No one can really give me an answer,’ Amy said.

‘I have a PoTS consultant that I’ve seen for 10 years, I see him every three months.

‘I’ve been up to London to see a specialist, I’ve got PoTS but that affects how fast my heart rate goes, but my heart stopping isn’t a symptom of that.

‘My heart stopping is a complete mystery to be honest. It’s hard because they haven’t got an answer, they can’t just pluck out an answer.

‘They can’t give me a pacemaker, one for my age, they just wouldn’t do it because they say I’m too young. My heart doesn’t just go too fast or too slow, it goes both.’

Amy said she ‘just has to hope it doesn’t happen again, and if it does, hope I’m that lucky all over again.’

Her blog has connected Amy with other people who have been diagnosed with PoTS and is read by doctors.

Get in touch at [email protected]