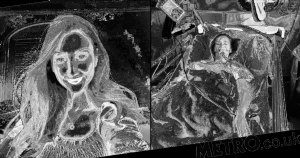 When student Madeleine Janes, now 21, began to experience excruciating stomach pains in August 2015, doctors told her she was just constipated.

But her symptoms, which kept her up at night as the pain was so intense she couldn’t sleep, persisted and worsened, with pain relief ineffective for relieving her agony.

The pain was so horrific that Madeleine went back to her GP and even to A&E several times.

Each time, she was turned away with her symptoms instantly dismissed as constipation. One nurse even labelled the student as ‘hysterical’ and told Madeleine’s parents, ‘you know how worked up young girls get.’

Madeleine felt like she was losing her mind, but knew something was wrong.

She took matters into her own hands by giving up gluten, just in case she was coeliac, but this didn’t work to reduce her pain.

Then, after weeks of excruciating pain, Madeleine went to a hospital in Devon – and was finally taken seriously.

Madeleine was immediately hooked up to an IV for pain relief, had blood tests, and was moved to intensive care to be monitored closely. She was given gas and air for her pain and the nurses and doctors commented that she looked like a woman in labour.

X-rays and ultrasound scans revealed the truth: Madeleine had two uteruses, two cervixes, one ovary, and was missing a kidney.

An MRI revealed the source of her pain – her smaller second womb was blocked and had filled with four years’ worth of period blood. Had this not been spotted, the womb could have exploded due to the pressure of all that built-up fluid.

Thankfully, emergency surgery was able to drain over 100ml of blood from the second womb, and after spending seven days in hospital, Madeleine was referred to a specialist in September 2015.

In addition to having two wombs, two cervixes, and two sets of ovaries, Madeleine also had a piece of skin that had grown over the top of her second cervix, causing the menstrual blood blockage. She needed additional surgery to have this removed.

She is now relieved of the pain – and so glad to know what’s really going on in her body – but has to live with the effects of her rare condition, including the knowledge that women with her condition have an increased risk of miscarriage or premature birth.

‘For a while it made me feel crazy, as if I was making it all up like they were insinuating,’ Madeleine says of the months spent trying to get doctors to take her seriously.

‘I’d never really come into contact with doctors much prior to this so I just assumed what they said was fact as they’re the ones with the qualification behind them – I don’t see it like this now.

‘When I was finally taken seriously in Devon, it was the biggest sense of relief I think I’ve ever felt. It sounds strange to say but the whole situation made me feel like giving myself a pat on the back.

‘It increased my faith in myself as I’d known all along something wasn’t right, even if I’d been told multiple times by different people that nothing was wrong.

‘Getting taken seriously was the confirmation I’d known I had deserved for weeks.

‘After the diagnosis sunk in, there was a lot of ‘I’ve lived sixteen years of my life not knowing what was going on inside me.’ It’s hard to explain but that’s a really weird thing to get your head around. In the space of ten minutes, I’d gained an organ and lost another organ – plus two uteruses, minus one kidney.

‘Without surgery, my second uterus would have continued to fill up every month I had a period and I assume the pain would have persisted.’

Madeleine has had negative experiences related to her condition – beyond the agonising pain she lived with for months.

‘When it comes to the men, most don’t know how to react, what to say or even have a response,’ she said. ‘Often they go quiet and become very awkward as if I’ve just told them some dirty embarrassing secret.

‘The worst experience I’ve had with a guy towards my condition was with my ex-boyfriend. When breaking up we were discussing the reasons why we weren’t compatible to which he went on to say, “You know how much I want to be a dad and you can’t have children”.

‘Hearing someone say that to you when they know it’s a big worry of yours is very hurtful and unforgettable.

‘To have something that is completely out of my control be used almost against me as a reason I wasn’t good enough. What he said affected me for quite a while and became a bit of a worry of mine for future partners.’

Madeleine is sharing her story to raise awareness for her condition and to encourage other women struggling to advocate for their health.

‘This September marked five years since I found out about my condition and since then, there are still so many women being dismissed and struggling to get a diagnosis and receive proper treatment and relief from their suffering – something that is so prevalent in the chronic illness community,’ she said.

‘The research and statistics show that women experience the healthcare system differently to men, and there is a long history of dismissing women’s pain and in 2020 this is still happening.

‘You know your body better than anyone else – any nurse, doctor or specialist. Listen to your gut and what your body is telling you and keep persisting even if you keep getting turned away.

‘Eventually the right person will hear you and you’ll get the help you need. It just might take a bit of time to get there but never let anyone tell you it’s all in your head.’