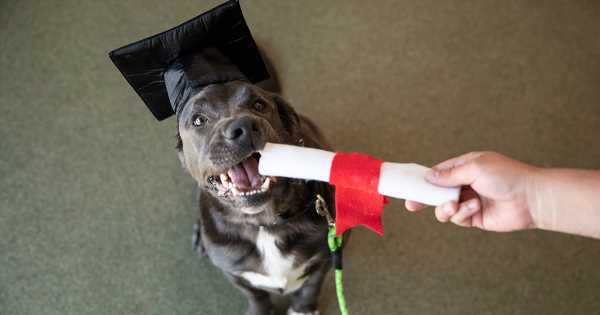 Elliot W. was volunteering at Asheville Humane Society (AHS) in December 2018, when he met a stray Labrador-mix who’d been picked up by Animal Control officers. Named Wavy Gravy after a 60’s peace activist and entertainer, it turned out that the dog wasn’t as “chill” as his namesake. Sadly, Wavy Gravy was extremely fearful at intake at AHS, and he had a long road ahead to find a loving home. But from the beginning, he had an advocate in Elliot.

Upon intake, the medical team estimated his age at around five years old but were unable to complete a full examination of Wavy Gravy as he “pancaked to the floor” and would not move.

For the first few days at AHS, Wavy Gravy didn’t eat anything. When anyone approached his kennel, he’d retreat to the back with a low growl and full-body trembling.

“He started to let a few of us approach his kennel,” recalls Elliot. “We’d wait until he’d slowly approach and sniff the treat, but he was quick to back into his corner.”

After 10 days, although staff could slowly get him out of his kennel, Wavy Gravy wasn’t showing signs of much improvement, which meant that finding him a loving home could be incredibly difficult.

But Elliot wasn’t ready to give up. He was also a volunteer at the ASPCA Behavior Rehabilitation Center (BRC) in Weaverville, North Carolina, and was familiar working with severely fearful dogs. Elliot knew that the BRC’s specialized staff and resources for fearful dogs could possibly help a dog like Wavy Gravy learn that the world isn’t such a scary place.

So, he helped facilitate conversations between the ASPCA and AHS and in January 2019, and Wavy Gravy was transferred to the BRC.

“I felt that behind his fear was a potentially great family pup,” says Elliot.

Once he got to the BRC, the sweet dog was renamed Roux and our behavioral team began working to gain his trust.

“He was extremely fearful when he came to the BRC and would sit in the back of his kennel and look so sad,” recalls Emilia Moncayo, Behavior Rehabilitation Specialist at the BRC and Roux’s case worker. 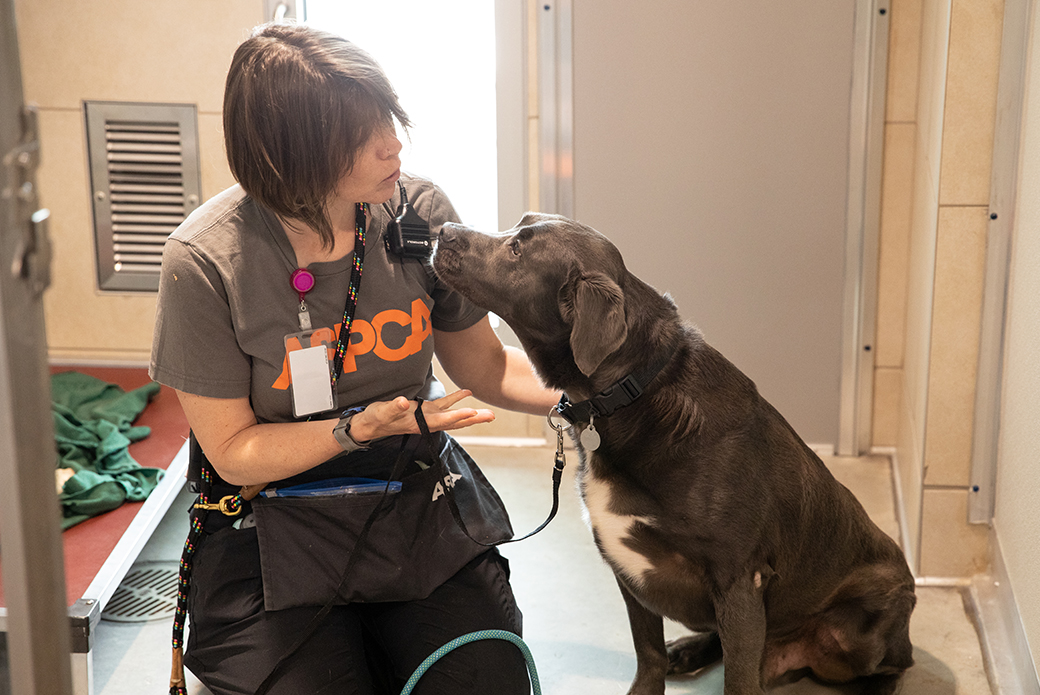 Roux’s love of food and walks became evident quickly, and behavior specialists used this knowledge in his treatment to help ease his wariness of people. He began to learn that people weren’t so scary—especially if they had some tasty treats! 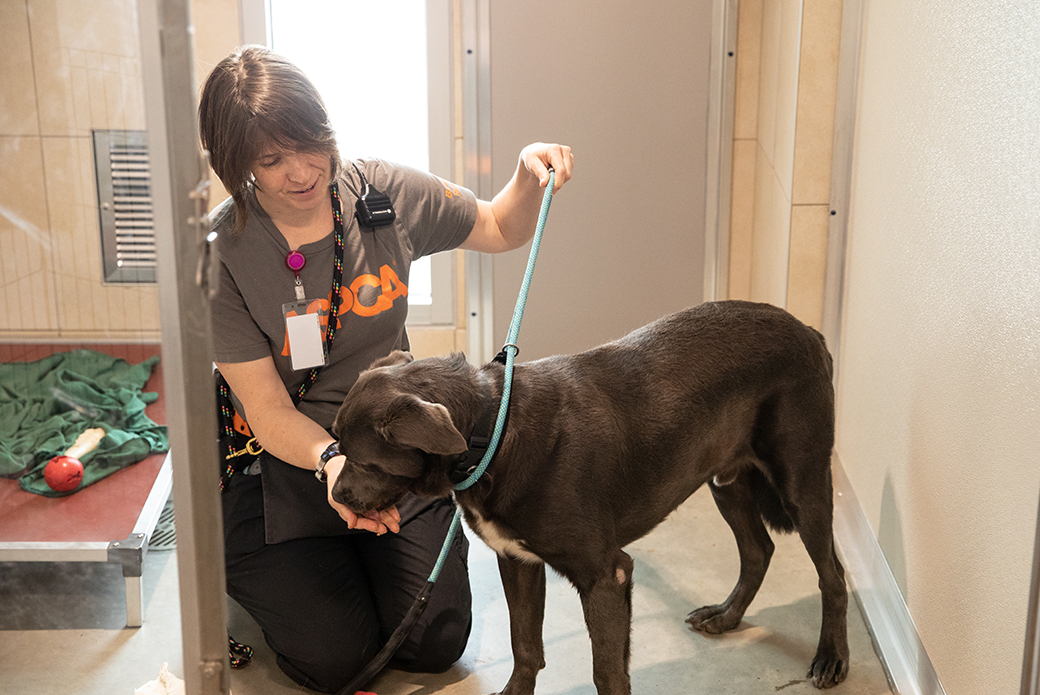 Over time, Elliot managed to keep an eye on Roux whenever he volunteered at the BRC. As a familiar, reliable face to Roux, Elliot would take him out on day trips to help continue his training in the real world.

Roux’s progress was astounding, and he transformed from fearful to friendly in a fairly short amount of time with the right help and dedication from the BRC staff and Elliot. Additionally, everyone began to suspect that Roux was younger than first thought, possibly two or three years old with the playful energy to match.

“There is a huge difference from his first evaluation compared to his last,” Emilia continues. “By the end, he would solicit familiar and novel people that interacted with him in the evaluation and would toss his body onto people so they would pet him.”

Roux received all A’s on his final evaluation at the BRC! He was easily leashed and walked with loose body and “waggy” tail both inside and outside. He happily ate all cheese offered from hands and played with toys that were presented to him. All characteristics that barely seemed possible only a few months earlier. Roux had begun to trust and had truly come out of his shell.

“Once he started treatment he blossomed fairly quickly and graduated at seven weeks!” Emilia tells us. Roux proudly graduated in March 2019 and was ready for the next step—finding a loving family. 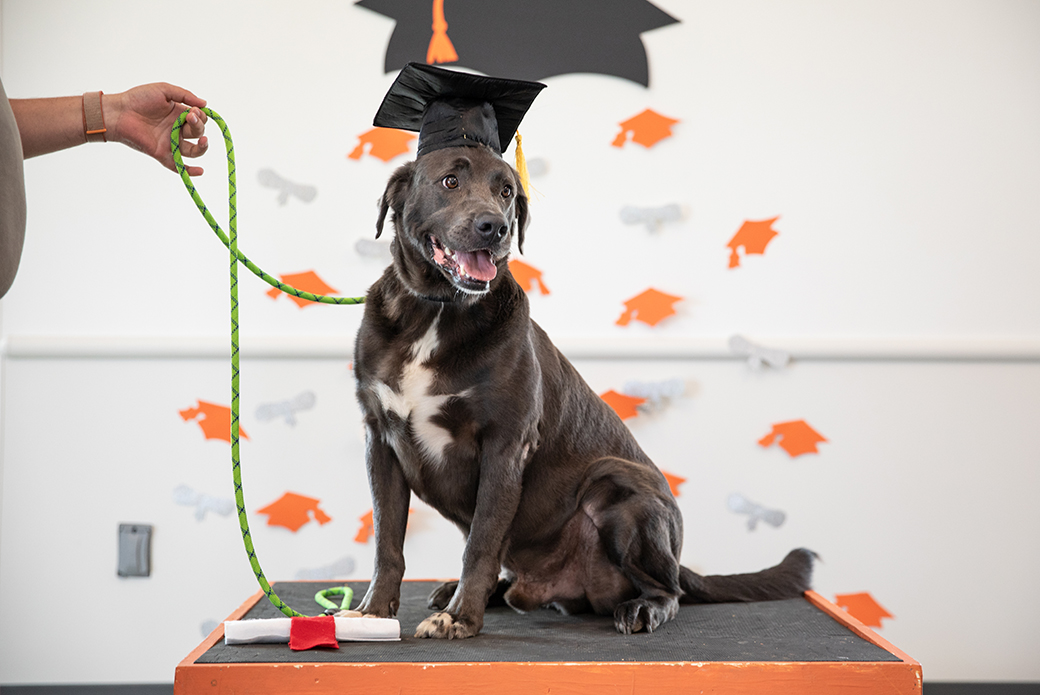 The Search for a Home

A neighbor of another AHS volunteer started fostering Roux with the idea of adopting him. But Roux is a very strong boy with a penchant for chasing squirrels. Even with extra advice and assistance from BRC staff and Elliot, the potential adopter felt they were not the best fit for Roux.

Elliot, still committed to Roux’s journey, decided he could continue to help Roux by fostering him until he found the right match. 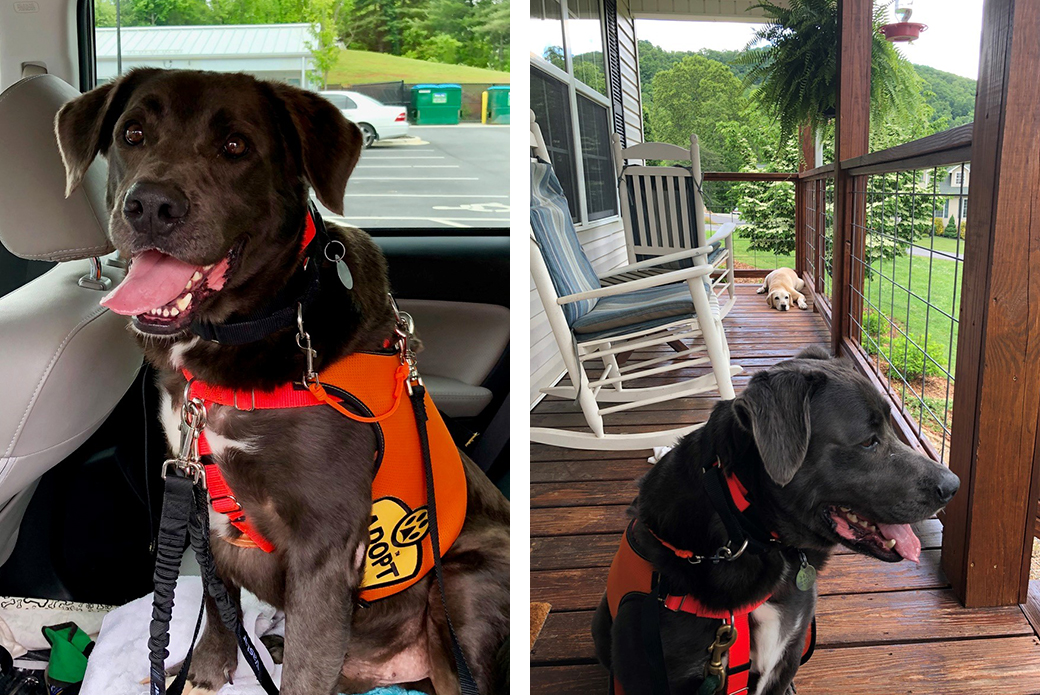 “I put his availability out there on Facebook and such, and fielded many emails and inquiries,” Elliot recalls. Despite the interests in the handsome canine, none were a good match for handsome Roux.

“Roux was doing so well in my home with my three-legged Labrador, Bella, that I decided that this was the right place for him to stay forever,” Elliot tells us. “Roux adopted me and Bella July 29, 2019.”

After having Elliot by his side as his biggest champion, Roux was officially where he belonged. 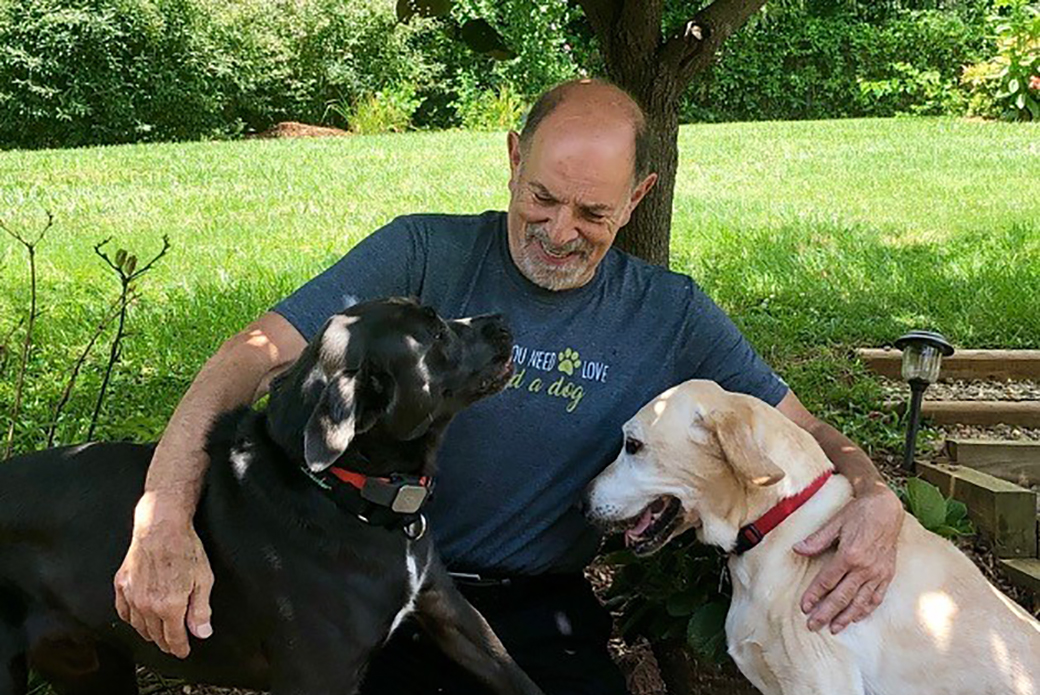 Roux with Elliot and his new fur sibling, Bella.

Now settled in with his new family, the smart, playful goofball is adored. Roux loves to keep an eye on Elliot and is very helpful letting him know when a mail truck is passing by. He has become fast friends with his new canine sister, and even though Bella is 13 years old, they love to zoom around and play together occasionally.

Roux continues to have a mischievous fondness for smaller creatures, though. Which has occasionally gotten him—and his family—into trouble.

“He still loves to chase squirrels and rabbits, but he’s not fast enough to catch anything—except he did find a skunk in the bushes around midnight one day while I thought the three of us were just enjoying the night air. We lived with that smell for a while,” Elliot reveals.

With Elliot as his advocate, Roux has become the best version of himself and continues to learn and thrive in his new home.

And how can you not fall in love with his smile and “teef!” 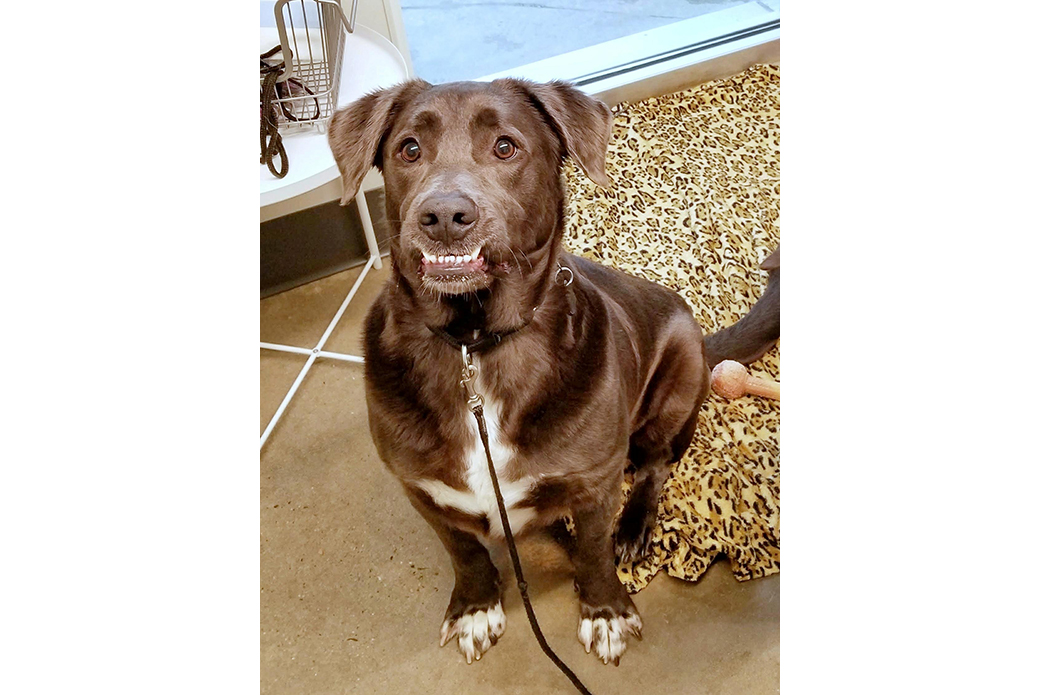