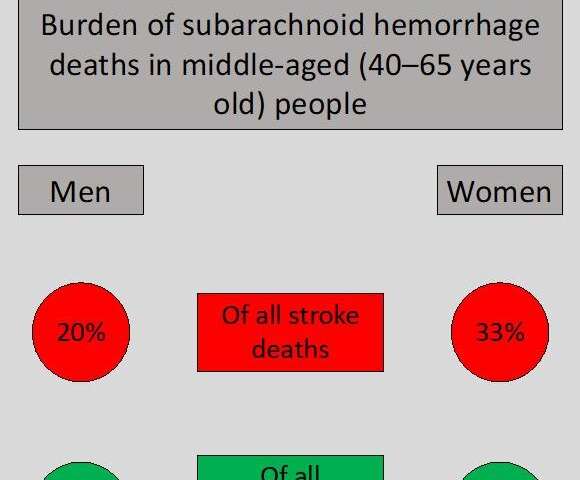 Subarachnoid hemorrhage (SAH), the most fatal of all cerebrovascular disturbances, results in death for 40-50% of patients suffering from the condition in the first months after the hemorrhage.

The annual incidence of SAH is considered to be six to seven cases per 100,000 people globally. Due to its rarity, the effects of this cerebral hemorrhage type have been considered very minor on the population level. Furthermore, it has been previously estimated that no more than 4% of all deaths caused by strokes are caused by SAH.

Although the disease has been known to be most prevalent among the middle-aged population, it has been impossible to reliably determine the share of deaths among the working-age population caused by subarachnoid hemorrhage: As many as a quarter of SAH patients die before reaching the hospital, and many countries record the deaths of such SAH patients according to more likely causes, for example, as sudden cardiac deaths. If an autopsy is not conducted in the case of sudden death, the cause of death and the possibility of SAH remain undetermined.

In Finland, autopsies are mandated by law to be conducted to determine the cause of death in cases of sudden death. This has enabled Finnish researchers to determine, for the first time, the share of deaths caused by subarachnoid hemorrhage in all deaths of middle-aged people.

The registry study, which was recently published in the Journal of Neurology, Neurosurgery and Psychiatry (JNNP), included precise details on the cause of death for almost 200,000 individuals between the ages of 40 and 65 who have died in Finland in the past 20 years.

The results indicate that, in middle-aged women, subarachnoid hemorrhage was the 12th most common cause of death from among all deaths and the most common type of stroke death throughout the entire 20-year study period.

According to Ilari Rautalin, the principal investigator, the finding is a surprise in the light of previous literature.

“In middle-aged women in particular, the number of SAH deaths clearly exceeds that of deaths caused by cerebral infarctions, deaths from several cancers and, for example, car crashes and other accidents,” says Rautalin, Bachelor of Medicine, who is also a Ph.D. student.

As SAH is a disease primarily caused by smoking and high blood pressure, it is largely preventable.

“Investment in healthy lifestyles would cut down significantly the share of premature deaths among the working-age population,” says Rautalin.

The other two members of the research group and authors of the article, Miikka Korja, docent and neurosurgeon at Helsinki University Hospital, and Jaakko Kaprio, professor of genetic epidemiology at the University of Helsinki, also emphasize the importance of a healthy lifestyle.

According to them, premature deaths among the working-age population could be effectively prevented, for example, by encouraging people to not smoke and by preventing hypertension as well as by providing them with good care.

The study of deaths among Finnish middle-aged people is based on population-level registers maintained by Statistics Finland and the Finnish Institute for Health and Welfare. The registers make it possible to carry out comprehensive studies on subarachnoid hemorrhage in Finland.

“There have been digital health registers in use in Finland from the 1960s. Finland’s high-quality healthcare system and a number of related top-level registers that cover the entire population are the reason why Finland has produced so many groundbreaking studies on subarachnoid hemorrhage,” says Docent Korja, who heads the group.

Recently, the group published a finding on the effect of smoking on subarachnoid hemorrhage, and they have now uncovered new information on the share of SAH deaths among middle-aged people. However, the significance of several risk factors potentially associated with SAH remains unknown.