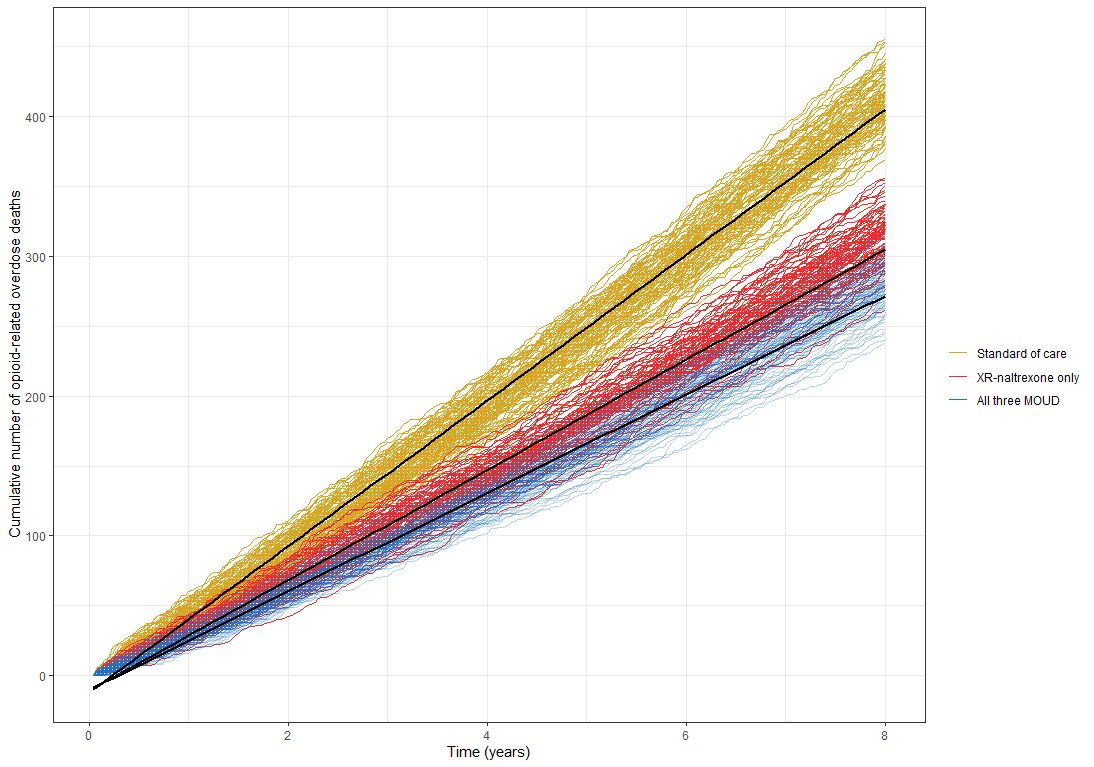 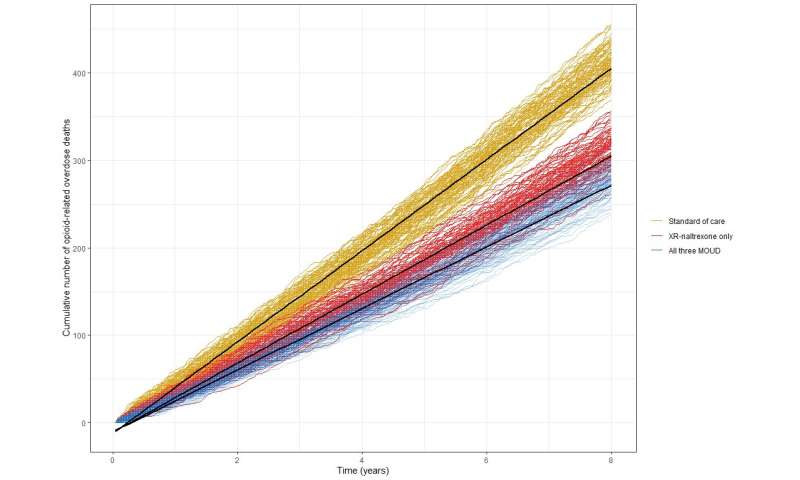 The epidemic of opioid-related overdose death persists across the United States, and people released from jails and prisons are at particular risk.

While the benefits of life-saving medications for opioid use disorder (MOUD)—such as methadone, buprenorphine and extended-release (XR) naltrexone—has been documented across hospitals and treatment centers, its uptake has been extremely limited in U.S. prisons and jail settings.

In a new study published in the International Journal of Drug Policy on July 22, researchers from the Brown University School of Public Health led by Alexandria Macmadu, a doctoral candidate in epidemiology, found that expanding access to all three MOUD in prisons and jails can reduce overdose deaths by 31.6% in certain circumstances.

The researchers developed a microsimulation model—a computer program that mimics the operation of government programs and demographic processes on individual members of a population—to simulate a population of 55,000 people at risk of opioid-related overdose death in Rhode Island. The primary calibration targets for the model were the observed overdose mortality rates in RhodeIsland in 2015. The model proceeds in two-week time-steps; therefore, incarceration was defined as being incarcerated in Rhode Island’s unified prison and jail system for a period of at least two weeks.

They then studied the potential effects of providing access to all three MOUD in a combined prison and jail setting to at-risk people in Rhode Island over eight years and compared that to an XR-naltrexone-only intervention and the standard of care.

In the standard of care scenario, which accounts for limited or no access to MOUD, the model predicted 2,385 opioid-related overdose deaths between 2017 and 2024. An XR-naltrexone intervention averted 103 deaths, for a 4.3% reduction, and access to all three MOUD averted 139 deaths, for a 5.8% reduction. Among those with prior-year incarceration, those numbers rose to 22.8% and 31.6%, respectively.

According to previous studies, the first two weeks following release from incarceration are associated with a 129-fold increase in overdose risk relative to the general population. During incarceration, tolerance to opioids is diminished or lost, which—combined with disrupted social support networks, limited access to MOUD, medical comorbidities and various other socioeconomic conditions—places individuals at a much higher risk for overdose upon release.

“We found that the most overdose deaths were averted when the computer model was set up such that persons initiating therapy at release were retained in care for longer periods,” said Brandon Marshall, corresponding author on the paper and associate professor of epidemiology at Brown. “This finding suggests that, to maximize public health impact, programs should ensure continuity of care by addressing known barriers to accessing treatment for opioid use disorder, such as unstable housing and medical insurance interruptions that often occur as persons are released from prison and jails.”

The findings align with similar studies conducted in other countries such as the United Kingdom and Australia that found that increased access to MOUD in prisons and jails is associated with a lower overdose rate.

The researchers say that the Rhode Island results suggest that other states would see similarly large mortality reductions with increased access to MOUD. However, Rhode Island stands out from other states when it comes to prisons.

First, Rhode Island has one of the lowest incarceration rates in the country. It also implemented diversion programming, which offers the dismissal of criminal charges to those with nonviolent felonies through participation in drug treatment and mental health programs. Finally, the pre-2016 standard of care in Rhode Island allowed for the provision of methadone on a 30-day taper protocol among those who were prescribed methadone prior to incarceration—the majority of prisons and jails in the U.S. offer MOUD only to women who are pregnant.

These characteristics likely underestimate the potential reduction in overdose mortality that would be observed if all three MOUD were implemented in correctional facilities elsewhere.