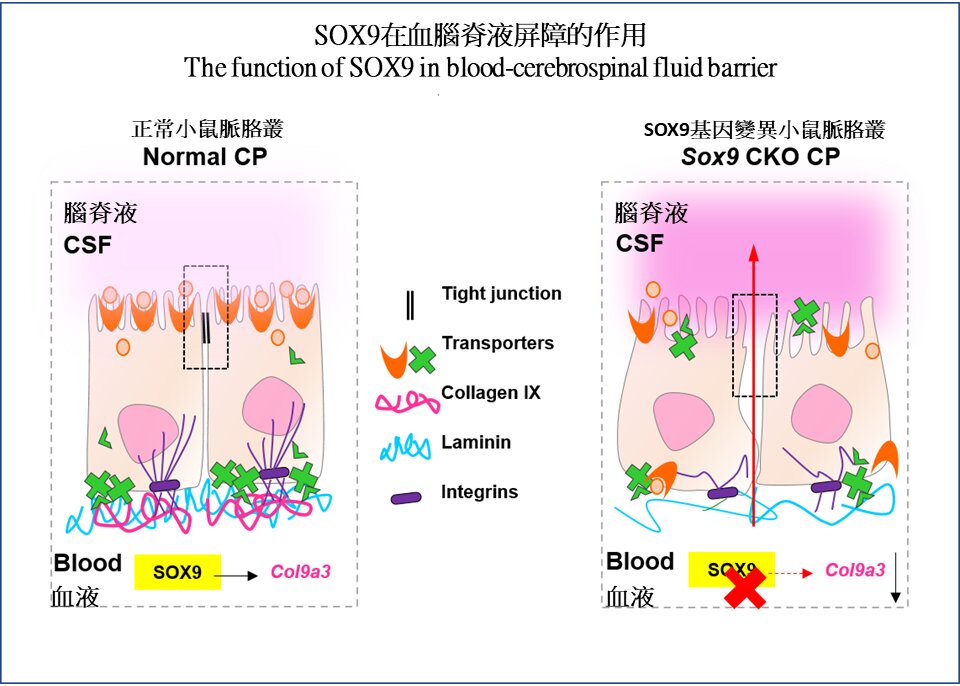 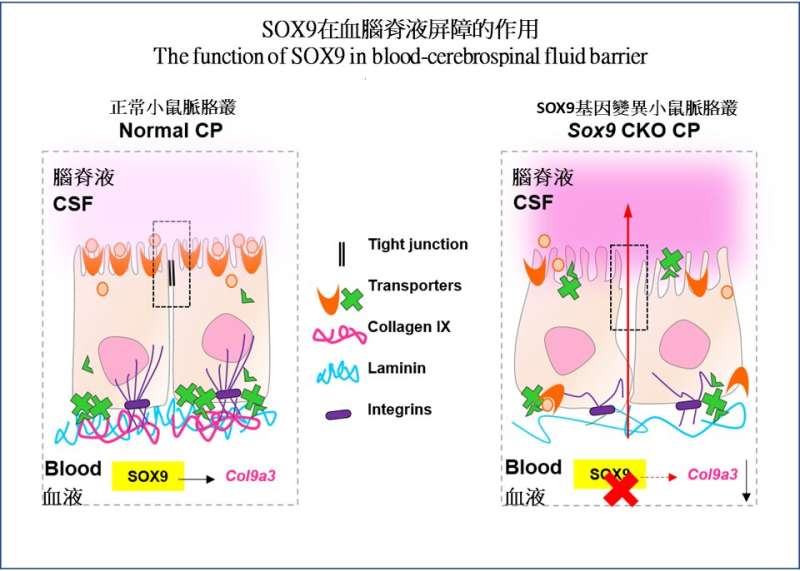 A research team from the School of Life Sciences at The Chinese University of Hong Kong (CUHK) has recently discovered that SOX9 protein is an essential regulatory factor of choroid plexus function that ensures the correct composition of cerebrospinal fluid (CSF). The finding, recently published in the prestigious scientific journal Proceedings of the National Academy of Sciences (PNAS), has provided the scientific community a novel understanding to the molecular regulatory mechanisms behind the function of the blood-CSF barrier and lays the groundwork for developing novel therapeutic strategies for preventing and treating neurodevelopmental disorders.

CSF is a clear, colorless body fluid that surrounds the brain and spinal cord, providing them a cushion against injuries. It also serves as a nutrient delivery and waste removal system for the brain. This major body fluid is produced and secreted by the regions of the choroid plexus. The choroid plexus consists of modified ependymal cells surrounding a core of capillaries and connective tissue. It filters the blood and restricts harmful molecules from entering into the central nervous system, thus forming a blood-CSF barrier that protects the nervous system and the brain.

A research team led by Professor KWAN Kin Ming, Associate Professor from the School of Life Science at CUHK, has been dedicated in investigating the genetic regulation of neuronal cell development in the cerebellum. In previous experiments, they have observed the development of hydrocephalus in laboratory mice with genetic deletion of SOX9 from the choroid plexus epithelium, and this drew their attention. After further investigation, it was found that the loss of SOX9 function led to an abnormal increase in hyperpermeability of the blood-CSF barrier.

In the normal case, the choroid plexus restrains molecules in the blood stream from entering the CSF freely; the loss of SOX9 function resulted in the entry of fluorescent tracers into the brain tissue by passing through the choroid plexus into the CSF. In the absence of SOX9 function, there was a dramatic increase in the CSF protein level with an abnormal deposition of blood-borne proteins in the CSF of mutant mice, which is also a common phenomenon seen in patients with hydrocephalus. Such a change of CSF composition significantly affected proper brain development in mice.

Through RNA sequencing, the team found that SOX9 is required for the synthesis of collagen IX at the choroid plexus epithelium. Using a temporal in utero gene knockdown approach, the team demonstrated that mice lacking collagen IX showed close resemblance to blood-CSF barrier impairment as seen in SOX9 mutants. Deficiency of collagen IX markedly increased the vulnerability of the basement membrane and, consequently, perturbed the polarized microtubule dynamics required for the maintenance of epithelial apicobasal polarity as well as the tight junction structures. These tight junctions, found between adjacent epithelial cells, are critical for restricting unauthorized passage of molecules across the choroid plexus.