Children raised in deprived orphanages in communist Romania have brains that are one 10nth smaller than English adoptees’, research shows.

Scientists took MRIs of nearly 70 people raised in eastern European institutions in the 1980s and later adopted by families in Britain.

The volunteers had all been beaten, starved and deprived of social interaction as babies and toddlers.

On average, their brains were 8.6 per cent smaller than English orphans who had not suffered the same levels of neglect.

The Romanians also had a higher rate of low IQ and greater symptoms of attention deficit hyperactivity disorder (ADHD).

And these physical changes go on to affect cognitive abilities and mental health as children grow, the academics speculate. 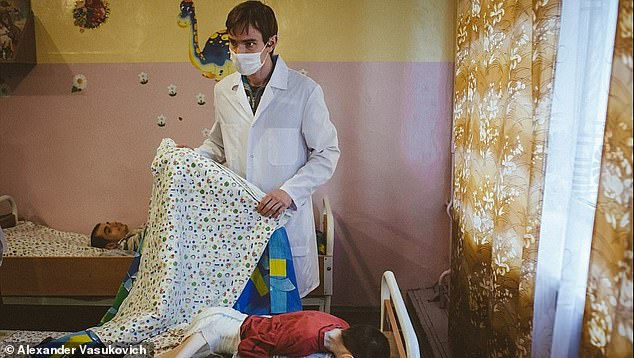 Children raised in deprived orphanages in communist Romania have brains that are one tenth smaller than English adoptees’, research shows. A photo that emerged in 2017 reveals the plight of children found on the brink of starvation in an orphanage in Belarus

Between 1965 and 1989, under a communist regime, hundreds of thousands of Romanian children were thrown into orphanages because their parents were too poor to look after them.

In the notorious children’s homes, youngsters were starved, beaten and forced to sleep in squalor.

Many of them developed psychological disorders and were infected by diseases such as hepatitis B and HIV.

As part of their latest study, King’s College scientists looked at MRI brain scans of 67 Romanians aged between 23 and 28 who’d been in the orphanages in their first few weeks of life.

Orphanages suffered as a result, with many lacking heating and food.

Many orphans did not know how to feed themselves, while others would starve to death. 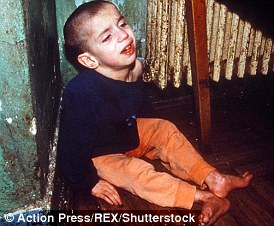 Children were tied to their beds or restrained in their own clothing.

Girls and boys’ heads would be shaved and children would often sit naked because staff forgot to clothe them.

The participants had spent between three months and three years in the homes.

Analysis showed participants’ brains were smaller the longer they had lived in them.

In comparison to British adoptees, the Romanians had visibly smaller right inferior frontal regions in the brain.

These areas are important in cognitive skills, such as emotional expression, problem solving, memory, language, judgment, and sexual behaviors.

The changes were also associated with lower levels of ADHD symptoms.

Lead study author Dr Nuria Mackes, a researcher in child and adolescent psychiatry at KCL, said: ‘Previous research… has suggested that the emergence and persistence of low IQ and a high level of ADHD symptoms involves structural changes in the brain but, until now, we have not been able to provide direct evidence of this.

‘Showing these very profound effects of early deprivation on brain size and then showing that this difference is associated with low IQ and greater ADHD symptoms provides some of the most compelling evidence of the neuro-biological basis of these problems following deprivation.’

Co-author Mitul Mehta, a professor in neuroimaging, added: ‘We found structural differences between the two groups in three regions of the brain.

‘These regions are linked to functions such as organisation, motivation, integration of information and memory.

‘It’s interesting to see the right inferior temporal lobe is in fact larger in the Romanian young adults and that this was related to fewer ADHD symptoms, suggesting that the brain can adapt to reduce the negative effects of deprivation.

‘This may explain why some individuals appear less affected than others by deprivation.

‘We believe this is the first time that research has shown such compelling evidence of compensatory effects around deprivation.’

The findings are published in the journal Proceedings of the National Academy of Sciences.

Symptoms typically appear at an early age and become more noticeable as a child grows. These can also include:

Most cases are diagnosed between six and 12 years old. Adults can also suffer, but there is less research into this.

ADHD’s exact cause is unclear but is thought to involve genetic mutations that affect a person’s brain function and structure.

Premature babies and those with epilepsy or brain damage are more at risk.

There is no cure.

A combination of medication and therapy is usually recommended to relieve symptoms and make day-to-day life easier.