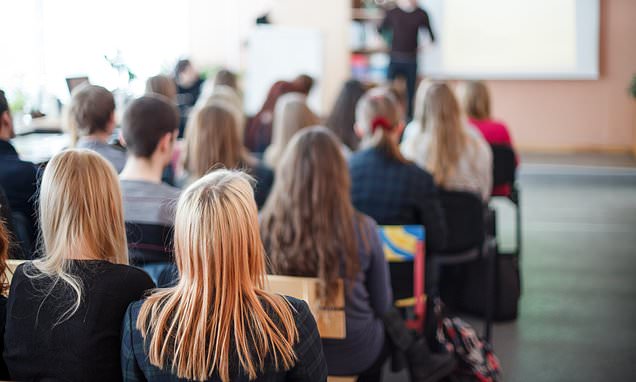 Fitting air filters in classrooms can be as effective at driving up pupils’ grades as cutting class sizes, research suggests.

The systems – which cost about £750 to install and maintain – had the same effect on maths and English exam results as slashing class sizes by a third.

Scientists behind the study said the improved scores were equivalent to ‘roughly two-and-a-half months of extra learning’.

Air filters improve the quality of air by working as a sieve to remove toxic particles, including pollutants emitted by cars and industry.

Research suggest these tiny pollutants seep into the bloodstream when inhaled and cause inflammation, affecting concentration and memory.

Experts say crowded classrooms result in poor exam results because students are not given one-on-one teaching. 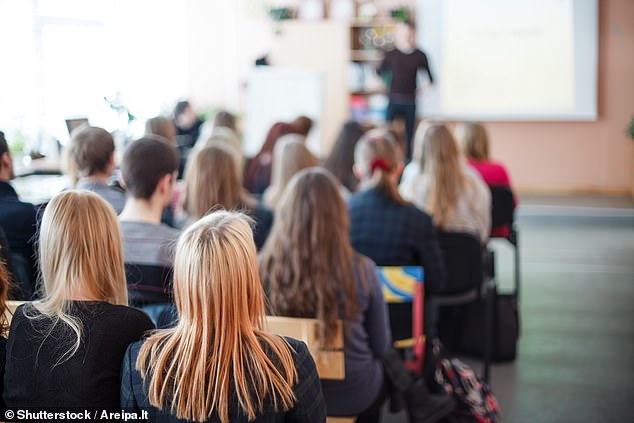 Fitting air filters in classrooms can be as effective at driving up pupils’ grades as cutting class sizes, a new study suggests (stock)

Around 2,000 schools in England and Wales are near busy roads where children are exposed to illegal levels of damaging air pollution from diesel vehicles.

Only the most polluted in London are fitted with air purifiers and there are no laws forcing schools to have them. It means only a handful have had them installed.

The latest study, by New York University, looked at 18 schools in Los Angeles installed with filters in 2016 after the largest gas leak in US history.

SoCalGas, the firm responsible, paid to have air purifiers fitted in classrooms within five miles of the leak.

The UK cities with the most pollution relative to their size were revealed last year.

Researchers from the University of Birmingham compared traffic pollution levels in 146 places around England, Scotland and Wales.

They found Luton in Bedfordshire had the highest concentration of nitrogen oxide gases – exhaust fumes – relative to its size, traffic and population.

The scientists had considered how well a city diluted or reduced its air pollution, taking into account how much it produced, its physical size and its population.

London still had by far the highest total amount of pollution but people using buses and trains meant there was a smaller proportion of it lingering in the air, compared to places where people drove themselves around in cars.

The schools which had the systems installed were never contaminated with gas, even during the leak.

This meant that improvements in air quality was a result of the systems filtering out common air pollution from car exhausts and industry.

It opened the door for researchers to compare performance of similar schools in the wider area.

The study found the air filters were linked to a 0.20 increase in maths scores and 0.18 in English results – results seen in other classes a third of their size. This improvement was kept up the following year.

The paper has yet to be peer reviewed, meaning other scientists have not had the chance to scrutinise it.

Mike Gilraine, author of the paper and assistant professor of economics at New York University, told The Times: ‘The results indicate that air filter installation is a highly cost-effective policy to raise student achievement and, given that underprivileged students attend schools in highly polluted areas, one that can reduce the pervasive test score gaps that plague public education.

‘Given the large test score increases they generate, installing air filters substantially outperforms other education reforms such as class size reduction on a cost-benefit basis.’

Analysis has shown millions of schoolchildren in Britain are being poisoned by pollution every day.

About 6,500 nursery, primary and secondary schools with a total of 2.6million children are in areas where levels of toxic particles exceed the World Health Organisation’s recommended limit.

The fine particles tested, known as PM2.5, are the most dangerous form of air pollution and can get into the lungs and into the blood stream.

Using data from the London Atmospheric Emissions Inventory, researchers have found that every school in the capital is over the WHO limit of 10mg per cubic metre, along with 234 in Birmingham.

Leicester and Nottingham each have dangerous levels affecting more than 100 schools.

Current estimates say that exposure to particulate air pollution contributes to around 29,000 deaths across the country every year in people with heart and lung problems.

Vehicles add tiny particles to the air through exhaust emissions, as well as wearing down tyres, brakes and road surfaces.

Because of their tiny size, PM10 and PM2.5 can penetrate deep into the lungs and throat, causing health issues.

Recent studies have suggested they can contribute to poorer memory and IQ among children, obesity, dementia, and lower sperm counts or erectile dysfunction.

WHAT IS AIR POLLUTION?

Carbon dioxide (CO2) is one of the biggest contributors to global warming. After the gas is released into the atmosphere it stays there, making it difficult for heat to escape – and warming up the planet in the process.

It is primarily released from burning fossil fuels such as coal, oil and gas, as well as cement production.

The average monthly concentration of CO2 in the Earth’s atmosphere, as of April 2019, is 413 parts per million (ppm). Before the Industrial Revolution, the concentration was just 280 ppm.

CO2 concentration has fluctuated over the last 800,000 years between 180 to 280ppm, but has been vastly accelerated by pollution caused by humans.

The gas nitrogen dioxide (NO2) comes from burning fossil fuels, car exhaust emissions and the use of nitrogen-based fertilisers used in agriculture.

Although there is far less NO2 in the atmosphere than CO2, it is between 200 and 300 times more effective at trapping heat.

Sulfur dioxide (SO2) also primarily comes from fossil fuel burning, but can also be released from car exhausts.

SO2 can react with water, oxygen and other chemicals in the atmosphere to cause acid rain.

What is particulate matter?

Particulate matter refers to tiny parts of solids or liquid materials in the air.

Some are visible, such as dust, whereas others cannot be seen by the naked eye.

Materials such as metals, microplastics, soil and chemicals can be in particulate matter.

Particulate matter (or PM) is described in micrometres. The two main ones mentioned in reports and studies are PM10 (less than 10 micrometres) and PM2.5 (less than 2.5 micrometres).

Scientists measure the rate of particulates in the air by cubic metre.

Particulate matter is sent into the air by a number of processes including burning fossil fuels, driving cars and steel making.

Why are particulates dangerous?

Particulates are dangerous because those less than 10 micrometres in diameter can get deep into your lungs, or even pass into your bloodstream. Particulates are found in higher concentrations in urban areas, particularly along main roads.

What sort of health problems can pollution cause?

According to the World Health Organization, a third of deaths from stroke, lung cancer and heart disease can be linked to air pollution.

Some of the effects of air pollution on the body are not understood, but pollution may increase inflammation which narrows the arteries leading to heart attacks or strokes.

As well as this, almost one in 10 lung cancer cases in the UK are caused by air pollution.

Around seven million people die prematurely because of air pollution every year. Pollution can cause a number of issues including asthma attacks, strokes, various cancers and cardiovascular problems.

Air pollution can cause problems for asthma sufferers for a number of reasons. Pollutants in traffic fumes can irritate the airways, and particulates can get into your lungs and throat and make these areas inflamed.

Women exposed to air pollution before getting pregnant are nearly 20 per cent more likely to have babies with birth defects, research suggested in January 2018.

Living within 3.1 miles (5km) of a highly-polluted area one month before conceiving makes women more likely to give birth to babies with defects such as cleft palates or lips, a study by University of Cincinnati found.

For every 0.01mg/m3 increase in fine air particles, birth defects rise by 19 per cent, the research adds.

What is being done to tackle air pollution?

The Paris Agreement, which was first signed in 2015, is an international agreement to control and limit climate change.

It hopes to hold the increase in the global average temperature to below 2°C (3.6ºF) ‘and to pursue efforts to limit the temperature increase to 1.5°C (2.7°F)’.

The UK government has announced plans to make the country carbon neutral by 2050.

They plan to do this by planting more trees and by installing ‘carbon capture’ technology at the source of the pollution.

Some critics are worried that this first option will be used by the government to export its carbon offsetting to other countries.

International carbon credits let nations continue emitting carbon while paying for trees to be planted elsewhere, balancing out their emissions.

No new petrol or diesel vehicles by 2040

In 2017, the UK government announced the sale of new petrol and diesel cars would be banned by 2040.

From around 2020, town halls will be allowed to levy extra charges on diesel drivers using the UK’s 81 most polluted routes if air quality fails to improve.

However,  MPs on the climate change committee have urged the government to bring the ban forward to 2030, as by then they will have an equivalent range and price.

The Paris Agreement, which was first signed in 2015, is an international agreement to control and limit climate change. Pictured: air pollution over Paris in 2019.

The speedy electrification of Norway’s automotive fleet is attributed mainly to generous state subsidies. Electric cars are almost entirely exempt from the heavy taxes imposed on petrol and diesel cars, which makes them competitively priced.

Criticisms of inaction on climate change

The Committee on Climate Change (CCC) has said there is a ‘shocking’ lack of Government preparation for the risks to the country from climate change.

The committee assessed 33 areas where the risks of climate change had to be addressed – from flood resilience of properties to impacts on farmland and supply chains – and found no real progress in any of them.

The UK is not prepared for 2°C of warming, the level at which countries have pledged to curb temperature rises, let alone a 4°C rise, which is possible if greenhouse gases are not cut globally, the committee said.

It added that cities need more green spaces to stop the urban ‘heat island’ effect, and to prevent floods by soaking up heavy rainfall.