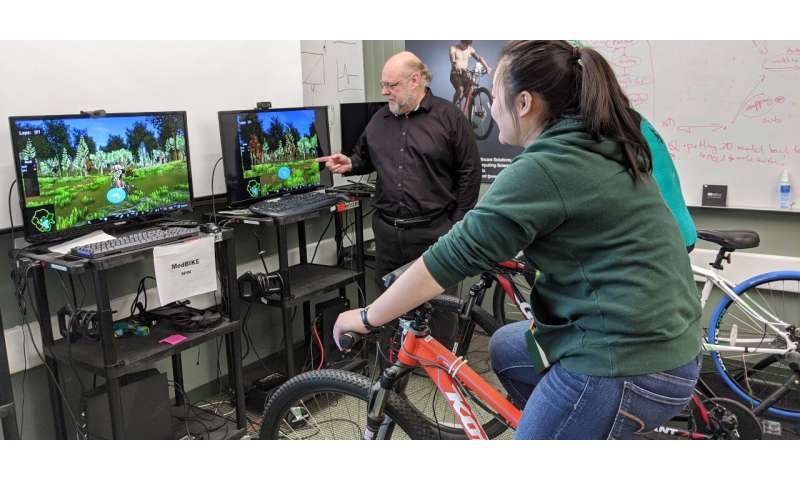 A University of Alberta computing scientist thinks the future of health care looks like the blinking check engine light on the dashboard of your car.

“There’s a whole bunch of sensors that say, hey, go to the garage, something’s wrong,” said Pierre Boulanger. “I could see that with humans.”

He has developed two products that could help take patients down that road. One is MEDBike, a biking system that remotely monitors blood pressure, oxygen levels and heart activity in recovering cardiac patients. The other is MEDRoad, a cloud-based tele-monitoring system that allows patient health to be observed without the need to go to a hospital or clinic.

With Canada’s aging population and number of remote communities, machine learning and virtual technology could be key to cutting rising health-care expenses and improving lives, Boulanger said. Continuous monitoring could help detect diseases earlier and virtual clinics could provide high-quality care at a fraction of the cost.

Getting back on the bike after a heart attack

One of the biggest misconceptions about heart attacks is the best route to recovery; it’s definitely not sitting back and sipping chicken noodle soup.

“It’s very counterintuitive,” Boulanger said. “You have to do exercise, because your heart muscle has been damaged and you need to reinforce the other muscles.”

Many cardiac patients don’t follow this advice, Boulanger said, because they are often more afraid of overexertion and another trip back to the hospital. He added that motivation is a constant struggle for many rehabilitation patients, especially in remote communities where there might not be a therapist to help the patient stay on course.

About five years ago, one of Boulanger’s students used a stationary bike to create a basic virtual reality exercise program capable of monitoring heart rates. Boulanger brought the concept to Peter Wood, an internist at the U of A. They worked together to expand the concept to cardiac rehabilitation.

MEDBike was financed by Boulanger’s 10-year appointment as Cisco chair in health care, given to explore the intersection between IT and health care. He’s since undertaken a series of small pilot projects, placing a half-dozen bikes in private homes, where cardiac patients undergo weekly sessions while a clinician keeps an eye on them remotely.

There are many potential upsides to the technology, Boulanger said. A specialist can help monitor multiple patients at once, gently bringing them up to higher speeds and into a regime that remains pleasant yet challenging. By adding video game-like features to the system, patients can visit a virtual world or even race each other, while special hardware helps create the resistance of climbing a hill.

Boulanger’s programmers have created a version for children, in which they chase animals or race through wormholes. He envisions the technology being used in nursing homes, where vital signs telemonitored by cloud analytics could make sure the exercise is done safely. In remote communities, the bike could be used to conduct stress tests.

While the prototypes of the MEDBike cost more than $4,000 apiece, Boulanger’s team has made a cheaper system for $1,500 and an even simpler version for roughly $400. He’s even got a new partnership with a Brazilian researcher who is using his virtual bike system to create a virtual spin class between the two countries using high-speed networks.

“I always say that the gamer of the future will have a six-pack,” Boulanger said.

Monitoring patients where they are

While the MEDBike shows promise for cardiac patients, Boulanger believes there’s an even bigger need for continuous monitoring, virtual clinics and cloud-based analysis.

His team is currently negotiating with telecom partners and pharmacies to commercialize MEDRoad, a cloud-based tele-monitoring software that connects patients to health-care professionals via two-way interface. The system can also be used to remotely monitor basic vital signs around the clock through cellphone networks.

Cloud-based monitoring would allow computers to spot problems that might otherwise go undetected. The result, Boulanger said, would be a more efficient health-care system that reduces misdiagnosis and helps triage patients before they ever walk into a hospital. It could also be used to check in on patients in remote settings, like cruise ships or work camps.

While the check engine light might still be a way off, Boulanger is working to get his projects through approval by the medical community. That means more pilot testing and software certifications by Health Canada.