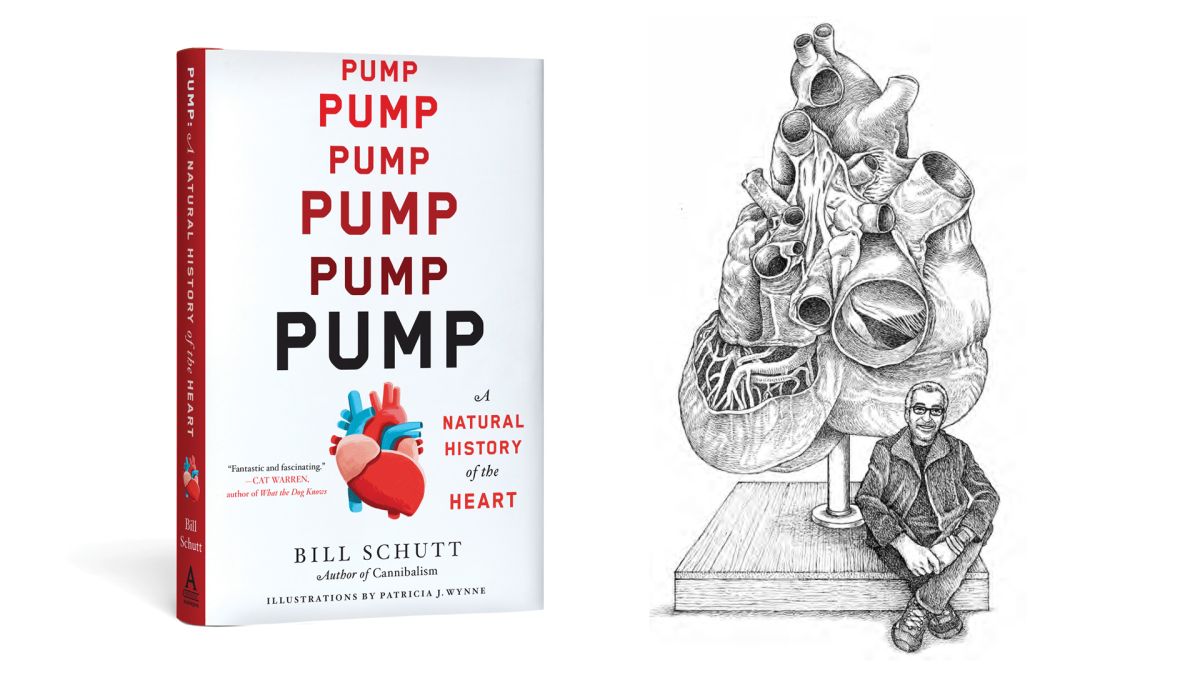 Below is an excerpt of “Pump: A Natural History of the Heart” by Bill Schutt, published by Workman Publishing on Sept. 21.

A Small Town with a Big Heart

In mid-April 2014, a sharp-eyed resident of Trout River, Newfoundland, looked out into the Gulf of Saint Lawrence and saw something peculiar. What had first appeared as a small dot on the horizon was growing larger and larger. By the time the giant thing washed ashore, the media had descended, and so, too, had the ungodly stink, which someone described to me as “a sickly perfume smell combined with the reek of decaying flesh.” And, indeed, this was more decaying flesh than anyone had ever seen before—around a hundred tons of it.

Soon the tiny fishing village was buzzing with reporters and gawkers as word of mouth gave rise to sensational headlines. The chatter between locals turned from bewilderment and disgust to health concerns, the potential for lost income, and even the threat of a horrific explosion. Stranger yet, something almost identical was taking place just up the coast, in the small town of Rocky Harbour.

Canadian winters are often frigid, but the winter of 2014 had been the coldest in memory. For the first time in decades, the Great Lakes had frozen over and their outlet to the Atlantic Ocean, the Gulf of Saint Lawrence, had a heavy buildup of sea ice. The high winds and currents had also piled up ice in the Cabot Strait, turning the gulf’s widest channel to the sea into a bottleneck. But if the inhabitants of Trout River and Rocky Harbour were struggling through the harsh weather conditions, a far more desperate struggle was taking place roughly two hundred miles to the south—in the Cabot Strait itself.

In the late winter and early spring, blue whales (Balaenoptera musculus) typically begin to leave the Atlantic Ocean and enter the Gulf of Saint Lawrence to feed on tiny crustaceans called krill. The largest animal known to have lived on Earth, a blue whale can reach one hundred feet in length can weigh up to 163 tons. By way of comparison, this is equivalent to twenty African bull elephants or about sixteen hundred average-sized adult human males. Despite their enormous size, blue whales were not hunted for their oil-rich blubber until 1864. The reasons for this were related to the great speeds they can attain—up to thirty-one miles per hour—and their tendency to sink when slain. Whalers preferred the three species of Eubalaena, since their bodies have a higher blubber content and tend to float after death. Thus, they were christened “right whales”; they were the right whales to throw harpoons at. Things went horribly wrong for blue whale populations after faster, steam-driven whaling ships began using the newly invented harpoon cannon, and more than 380,000 blue whales were slain between 1866 and 1978. Most countries don’t allow whale hunting anymore, but the blue whale’s propensity to sink after death remains an inconvenience to those attempting to study its anatomy.

In March 2014, Mark Engstrom, senior curator and deputy director of collections and research at the Royal Ontario Museum (ROM) in Toronto, received a call from his friend Lois Harwood. Harwood, who worked for Canada’s Department of Fisheries and Oceans (DFO), wondered if Engstrom had heard the news that nine blue whales feeding in the Cabot Strait had died. Apparently, she said, they were unable to escape a massive ice floe, had gotten trapped in the ice, and perished. This was tragic, especially because blue whales were critically endangered, and the loss of nine individuals meant the loss of something like 3 to 5 percent of the total North Atlantic population.

Harwood knew, though, that Engstrom was looking to obtain specimens of every whale species found in Canadian waters. She told him that three of the whales hadn’t sunk, possibly because they had been buoyed by the thick ice. Engstrom became even more interested after Harwood put him in touch with Jack Lawson, a researcher with DFO who had been tracking the dead whales by helicopter for the past month. He told Engstrom that he expected the trio of whales to wash up on the shore sooner or later—and in April, they did.

“The thing is, the whales drifted ashore in these three tiny villages,” Engstrom told me during my visit to the ROM in 2018. “Trout River doesn’t really get the normal tourist traffic. It’s sort of a struggling community. The mayor told me one day he looked out and he could see the whale in the water and he said, ‘Oh, please, God, don’t let that thing come ashore here.’ He said the next morning there it was, on the only stretch of beach they have, and right underneath their only restaurant—this giant dead blue whale, stinking to high heaven.”

I asked Engstrom what happened next.

Engstrom laughed. “Then it started to bloat.”

“That must have lightened things up,” I offered.

“Not really,” he said. “By then, they’d all seen YouTube videos of whales exploding.”

Videos of whales detonating from an accumulation of gases have been making the rounds on the internet for years. At last count, they numbered over two hundred and included one pitching “The Exploded Whale Song.” My personal favorite, though, depicts a fifty-six-foot, sixty-ton sperm whale that beached in Taiwan in 2004. Local university-scientist types quickly decided to take advantage of the unexpected opportunity by carrying out an autopsy on the megacorpse. They also decided that it would be best to do this at their labs, and so a massive effort was undertaken to move the thing. Three cranes, fifty workers, and thirteen hours later, the whale was driven off, strapped to the open bed of a tractor-trailer. But on the way through the busy streets of Tainan City, the putrefying giant exploded spontaneously. The blast spewed thousands of pounds of rotten blood, blubber, and entrails onto cars, motor scooters, and shops. It even soaked some unfortunate onlookers.

“But blue whales don’t do that,” Engstrom assured me, just as he had previously tried to assure the freaked-out and unconvinced residents of Trout River. He told the townsfolk that unless people decided to jump up and down on the dead behemoth or cut it open, the tissue breakdown would likely allow the accumulating gases to escape slowly, like from an old balloon. “Which is what eventually happened,” he said.

Engstrom explained that most of the questions he got from the reporters on the scene in Newfoundland were related to one of two topics: smell and size. “How big is the heart? We hear it’s as big as a car.” He and his team heard the heart-size question so many times that, finally, one of his technicians responded with a question of his own. “Why don’t we try to save the sucker?”

From PUMP: A Natural History of the Heart © 2021 by Bill Schutt. Reprinted by permission of Algonquin Books of Chapel Hill. All rights reserved.

Mindy Weisberger is a Live Science senior writer covering a general beat that includes climate change, paleontology, weird animal behavior, and space. Mindy holds an M.F.A. in Film from Columbia University; prior to Live Science she produced, wrote and directed media for the American Museum of Natural History in New York City. Her videos about dinosaurs, astrophysics, biodiversity and evolution appear in museums and science centers worldwide, earning awards such as the CINE Golden Eagle and the Communicator Award of Excellence. Her writing has also appeared in Scientific American, The Washington Post and How It Works Magazine.