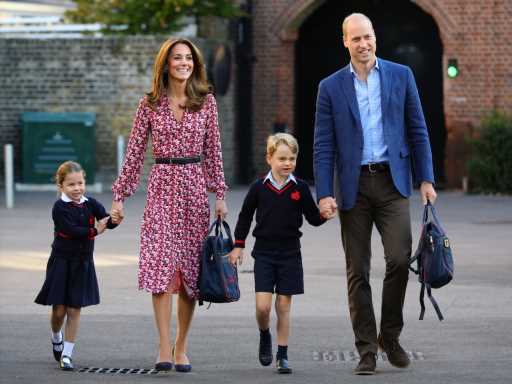 It might be a very merry — and very busy — Christmas for Prince William, Kate Middleton, and their children, Prince George, Princess Charlotte, and Prince Louis this year. According to Ok! magazine, an expert reveals that they’re basically just like us during the holidays (minus the whole prince and princess thing). And like so many others, the Royal Family may be dividing their time between loved ones by splitting up their Christmas celebrations into three separate occasions come December.

Royal Family expert and author Duncan Larcombe suggests that Prince William and Middleton will likely  make time to see each of their families — including an intimate celebration for their own immediate family, a gathering with Prince William’s royal side and another visit with Middleton’s family. “I think we’re looking at three Christmases rolled into one for William and Kate and their children,” Larcombe told Ok!. “There will be Christmas on their own with their kids, the more formal celebrations at Sandringham with William’s family and then time with Kate’s family, the Middletons.”

Even though the term “royal” might be associated by some with opulence or wealth, Larcombe is adamant that Prince William and Middleton won’t be spoiling Prince George, Princess Charlotte, or Prince Louis just because they could have multiple Christmas celebrations. “But something we know for sure about William and Kate is that they want their children to feel normal and so they certainly won’t be lavishing them with expensive gifts, that’s for certain,” he said. “They won’t let them be spoiled.”

While it’s still tradition for the Royal Family’s children to be showered with gifts from the public during the holiday season, “There are protocols for what happens to these gifts and the children will be shielded from them,” Larcombe said.

We’re sure the kids won’t mind enjoying multiple Christmas festivities this year — but what they can expect at each of the three Christmas gatherings are a bit different. “The Sandringham Christmas is quite formal and traditional and the royals don’t tend to go in for lavish presents,” Larcombe noted of the Royal Family Christmas affair at Sandringham Estate. As far as Prince William and Middleton’s private Christmas celebration, it sounds like a simple and quiet time at their own residence in Norfolk, England. “I think William and Kate will be making their own traditions by having a little family Christmas and presents under the Christmas tree at Anmer,” he said. And as for Middleton’s side of the family, the expert is sure that there will be time set aside slightly after Christmas takes place. “I’m told that they’re definitely seeing their other grandparents, the Middletons, possibly for New Year, either at Anmer or they may go to Carole and Michael’s home in Berkshire,” Larcombe said.

It sounds like Prince William, Kate Middleton and their kids might need a vacation after they make it through multiple Christmas celebrations this year — but we appreciate the fact that they really don’t seem much different than us when it comes to juggling family during the holidays.

Before you go, check out some of our favorite toys for the holidays: