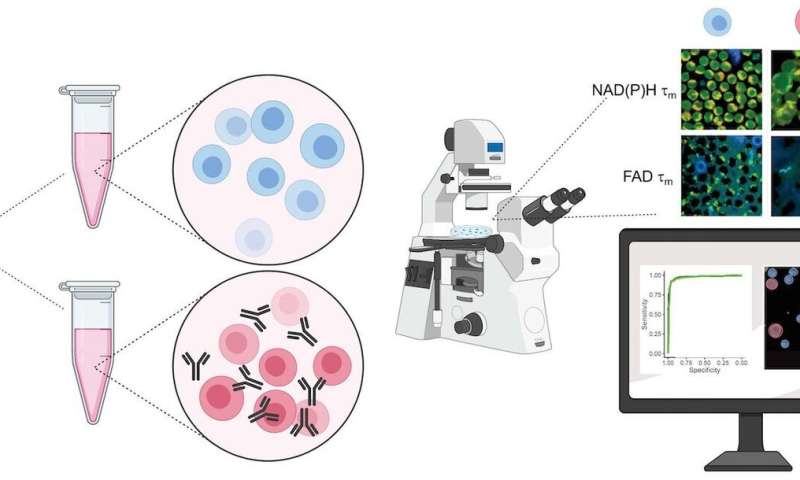 T cells are the immune soldiers at the frontlines of the battle with infiltrating pathogens that seek to cause disease. A new study published in Nature Biomedical Engineering describes a novel label-free imaging technique that can differentiate active T cells from those off duty.

The method could help assess T cell involvement in immunotherapies for cancer treatment or autoimmune diseases.

“T cells have a metabolic switch that regulates their activity,” says Melissa Skala, principal investigator at the Morgridge Institute and associate professor of biomedical engineering at UW-Madison. In a healthy individual, most T cells are in a quiescent state—they’re inactive, but ready and waiting for the signal to join in active combat against an invading virus or bacteria.

“We wanted to test if our imaging technology could tell the difference between the quiescent T cells and activated T cells,” says Alexandra Walsh, formerly an assistant scientist at the Morgridge Institute who is now an assistant professor of biomedical engineering at Texas A&M University.

Most methods for characterizing T cells are antibody-based, such as flow cytometry or immunohistochemistry. These require staining with antibodies or contrast agents, a process that is destructive to the cells.

Alternatively, Walsh and Skala’s method detects autofluorescence from molecules within the cell that naturally emit light when imaged by a microscope paired with an infrared laser. This label-free process is non-damaging and doesn’t alter the behavior of the cell. The technique could be adapted to image cells in a plate or dish, tissue samples, or even in vivo imaging of a complete organism.

To validate their approach, the researchers acquired blood samples from healthy donors, isolated the T cells, and measured autofluorescence of NAD(P)H and FAD, two molecules that are involved in cellular metabolism.

“We kept some of the T cells in their quiescent state, and then we added antibodies to a group to activate them,” says Walsh.

Images of the quiescent cells versus the activated cells revealed differences in metabolic function, most notably through a change in NAD(P)H autofluorescence in the activated T cell populations. They also observed that active T cells were slightly larger in size than quiescent cells.

The activation protocol and imaging capabilities will be useful for manufacturing the CAR-T cells used in immunotherapies, says Skala. These re-engineered T cells are often co-cultured with other cells, like cancer cells, to test their reactivity.

However, using additional harsh reagents or antibody-labels to further characterize the T cell is a bottleneck for CAR-T cell manufacturers. The autofluorescent approach provides an attractive way to perform those experiments by imaging the same cells across multiple timepoints in a way that’s non-damaging.

“We showed that you can resolve temporal changes with our imaging technique,” says Walsh. “We were able to see changes in the imaging endpoints within minutes after adding the activating antibodies.”

Walsh adds that it would be difficult to see these dynamic changes using flow cytometry, since the time required for staining and incubation make it difficult to capture multiple timepoints.

The Skala lab plans to continue this line of investigation to better understand how a cancer patient’s T cells might respond as the tumor grows or as they’re treated with immunotherapies.

“These technologies could tell us something about tumors or about T cell manufacturing that we didn’t know,” adds Skala, “because previously we didn’t have the methods to monitor T cell behavior over time.

While this new technique offers many advantages over traditional methods, there are still limitations. For one, autofluorescence imaging isn’t very sensitive.

“We aren’t relying on really specific labels, we’re relying on the metabolism of the cells,” Skala says. “That’s only going to get you so far in differentiating the cell types.”

The Skala lab is working on developing a prototype to take the imaging capability of their large-scale microscope and translate it into a “box-sized” system.