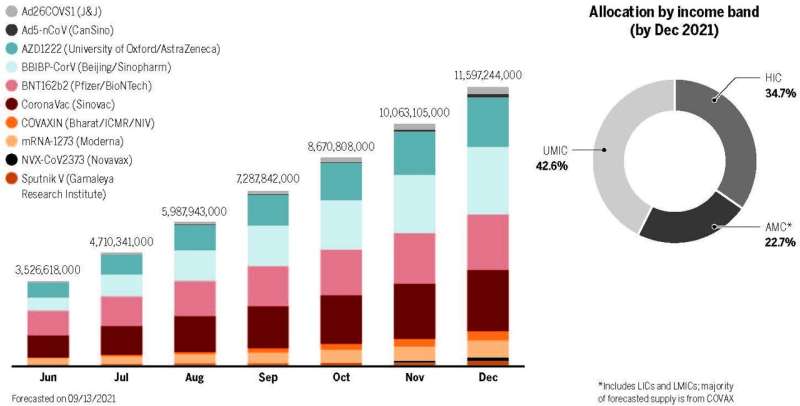 Two well-known vaccine researchers, Dame Sarah Gilbert, one of the co-developers of the Oxford vaccine and Richard Hatchett, head of the Coalition for Epidemic Preparedness Innovations, have issued a reminder to the world that the pandemic will not end unless stronger efforts are made to vaccinate people living in poor countries. In their Focus piece published in the journal Science Translational Medicine, the pair note that as of the end of last month, 41.5% of the world’s population had received at least one dose of the available vaccines—but in poor countries, that percentage is just 1.9%.

The researchers note that the disparity becomes even more clear when looking at the high vaccination rates in some of the wealthiest countries compared to those in the poorest countries. Such inequitable distribution of vaccines, they note, has implications for everyone. Not only does it put the lives of millions of people in poor countries at continued risk, it also prolongs the pandemic—and the longer the pandemic goes, the more opportunities there are for variants to arise, possibly making current vaccines useless, or worse, allowing a much more deadly pathogen to develop.

On a more promising note, the researchers point out that the number of vaccines being produced has grown rapidly—to the point that there should soon be enough for every person on the planet. Unfortunately, that is not all there is to the story. It is much easier, they note, to create large quantities of vaccines than it is to get those vaccines to remote areas. Simply sending billions of doses of vaccines to the government of a poor country will not ensure the people living there will receive treatment.