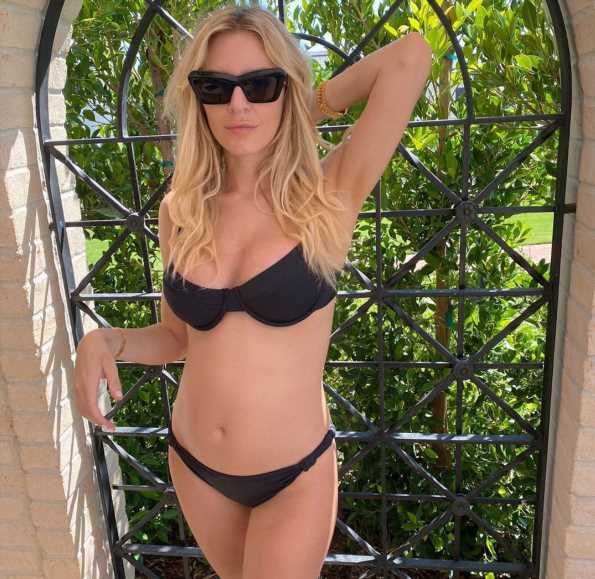 Morgan Stewart is showing off her baby bump!

On Saturday, the E! News’ Nightly Pop host shared a photo on Instagram, revealing her growing baby bump in a black bikini. "Can we get this emoji a bikini please….🤰🏼," she joked about the pregnant woman emoji.

Her post comes nearly one month after Stewart, 32, first announced she is expecting her first child, a baby girl, with fiancé Jordan McGraw.

"Bumping it up a notch…," the son of Dr. Phil McGraw wrote in the comments section of his pregnant fiancée's post.

Been working on my dad jokes for years.

Stewart broke the news that she's expecting on social media, sharing a video of the couple bursting a balloon filled with pink confetti to announce they're having a baby girl.

"She may not be great at math but at least we know she'll be well dressed 🥰," the first-time mother-to-be captioned the clip on her Instagram feed.

"Been working on my dad jokes for years," McGraw wrote on his own Instagram page. Stewart appeared on E! News' Daily Pop the next day to discuss the exciting news with co-hosts Erin Lim and Nina Parker.

"First of all, I'm so happy that we can now say that out loud and it's no longer a secret," she said. "Because the secret-keeping for that long, for me, has been one of the hardest things I've ever had to go through."

The Rich Kids of Beverly Hills alum also revealed she has been dealing with severe morning sickness — but she joked that it helped her keep the news to herself. "I was so sick that I couldn't talk a lot," she laughed.

Stewart and McGraw's baby news comes just a month after the couple announced their engagement.

She was previously married to her Rich Kids of Beverly Hills costar Brendan Fitzpatrick for three years, before announcing their split in 2019.