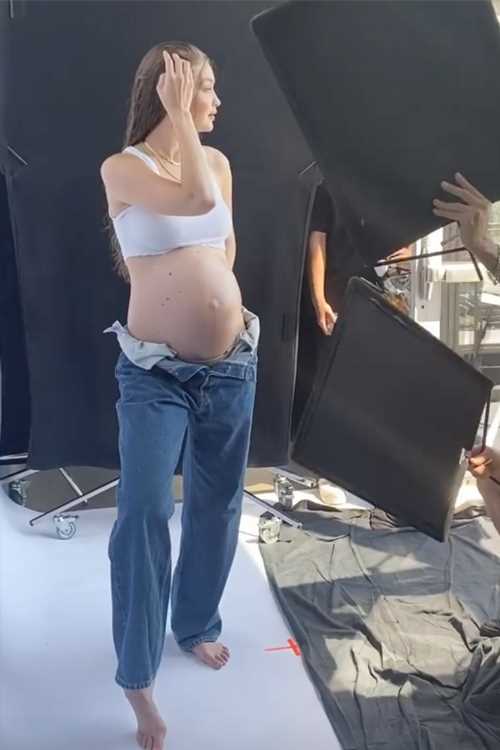 Gigi Hadid (and her baby bump) is ready for her close-up!

On Monday, the supermodel, 25, shared behind-the-scenes footage from a glamorous photo shoot that captured the stunning images she debuted on Wednesday.

Along with the poignant pregnancy photos last week, Hadid reflected on her experiences on the road toward welcoming her first child with boyfriend Zayn Malik, writing that she's "cherishing this time."

"Will never forget creating these special images with my friends @luigiandiango @gabriellak_j @erinparsonsmakeup thank you. I love you!" she added of the team behind the shoot.

In the three videos from the photo shoot, Hadid poses as a fan blows a breeze through her hair and the sheer outfits that displayed her silhouette. One glimpse showed the model with her bare baby bump showing while wearing a pair of unbuttoned blue jeans.

On Thursday, Hadid opened up on Twitter about the maternity photo shoot, admitting to a fan who asked her how it felt "shooting with [her] baby bump for the first time" that it was "more tiring" than her usual modeling gigs.

"I loved it, I knew what I wanted from the pics and Gab and L&I really made it happen for me🥺🙏🤍 but was definitely more tiring than working normally," she wrote. "Got through the second look and was like 'guys I think I can only do two more' 😰 hahaaaa."

The maternity photo shoot comes after the star explained that she was being protective about sharing too much about her pregnancy amid more "important thing[s] going on in the world," like the Black Lives Matter movement and the ongoing pandemic.

cherishing this time. appreciate all the love & well wishes ♡ will never forget creating these special images with my friends @luigiandiango @gabriellak_j @erinparsonsmakeup thank you. I love you!

While she was keeping her pregnancy out of the spotlight, Hadid also promised fans that she'd been documenting the experience and would eventually share more.

"I have been taking a lot of pictures of my bump and sending it to friends and family and it's been really cute and exciting, and I'm trying to document it well because I've heard a lot of people say obviously, 'Make sure you don't miss it,' " she said.

"And I will be sharing stuff like that in the future," she added, explaining that she's "just not rushed to do it" and wants to experience pregnancy without worrying about it being in the public eye. "I just don't want to worry about waking up every day during my pregnancy and, like, worry about having to look cute or post something," Hadid said.