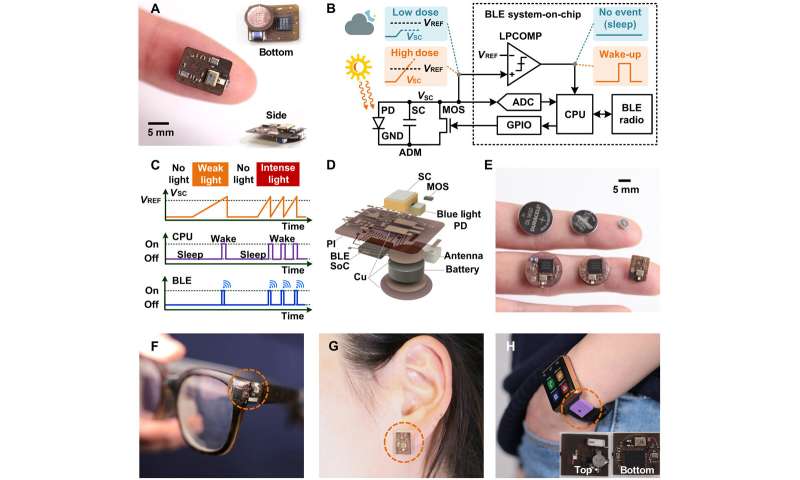 Electromagnetic radiation (EMR) exposure from the sun and artificial lighting systems represent a health risk, therefore personalized methods for EMR dosimetry can guide people toward lifestyle behaviors that ensure healthy levels of exposure. In a recent report on Science Advances, Kyeongha Kwon and a research team in the departments of Biomedical Engineering, Statistics, Electronics Convergence Engineering and the Center for Advanced Regenerative Engineering in the U.S. and Korea developed a millimeter-scale, ultra-low-power digital dosimeter platform.

The device provided continuous EMS dosimetry using an autonomous mode, simultaneously with one or multiple wavelengths for time-managed, wireless consumer devices. The scientists included a single, small button cell battery to support a multi-year life span, facilitated by a light-powered accumulation mode of detection and light-adaptive ultra-low-power circuit design. They employed field studies to demonstrate single- and multimodal dosimetry platforms and focused on monitoring short-wavelength blue light from indoor lightening, across to display systems, as well as detect ultraviolet/visible/infrared radiation from the sun.

Adverse influences of overexposure or underexposure to EMR can accumulate with latent consequences; where excessive exposure to ultraviolet radiation (UVR) and blue light from the sun or emissions of tanning beds and cellphones, can have associated health risks. For instance, repetitive keratinocyte damage from chronic exposure to UVR is fundamental to cause skin cancer predominantly in the United States. The shorter wavelengths of the visible spectrum (VIS) can generate reactive oxygen species in the skin to cause DNA damage, hyperpigmentation and inflammation, alongside collagen and elastin degradation to contribute to photo-aging. Beyond specific thresholds, blue light can cause photochemical damage in retinal tissue to accelerate age-related maculopathy and modulate retinal control of the human circadian rhythm to suppress melatonin secretion. Nevertheless, relative doses of UVR and VIS are essential to produce vitamin D and offer immunomodulation, where insufficient exposure can lead to seasonal affective disorder that can be treated with bright light therapy. 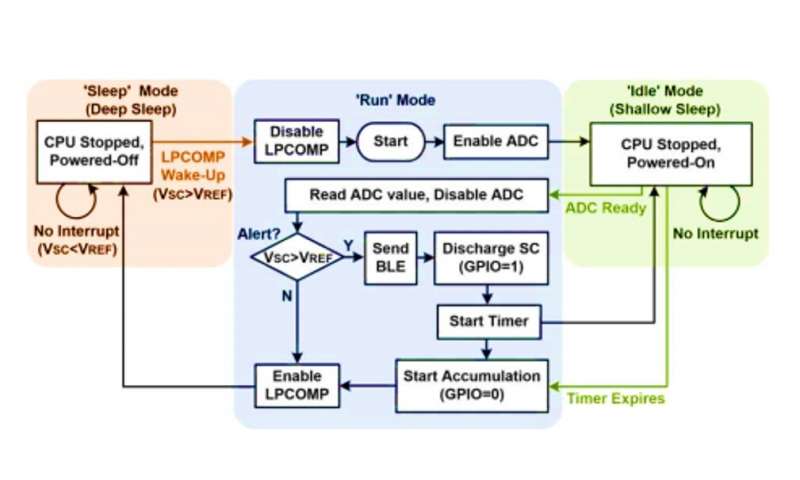 An ideal platform can offer autonomously remote wireless updates while retaining key features of the mm-NFC approach, which Kwon et al. used as a strategy, accompanied with an advanced light-adaptive electronic control circuit. The setup included an accumulation detection module (ADM) for dosimetry and a Bluetooth low energy (BLE) system on a chip (SoC) for wireless communication. As a key feature, the scientists built-in the ADM to directly measure continuous dose exposure without power consumption. In contrast, conventional digital approaches approximated dose through time integration across brief measurements of intensity using active, battery-powered electronics; where increased sampling frequency increased the accuracy but decreased the battery life. The ADM eliminated this trade-off to accomplish highly accurate dosimetry with extremely long intervals between active measurements.

The device remained in an ultra-low sleep mode (~0.4 μA) in the absence of light while continuously monitoring dosage via the ADM. When the dose exceeded a threshold, the device briefly woke up (~10 μA) to wirelessly transmit exposure data using BLE (Bluetooth low energy) protocols to a smartphone to then reset the ADM and quickly return to sleep mode. The work resulted in an exceptionally power efficient dosimeter with automatic regulation and communication capabilities without active user engagement. Kwon et al. aim to implement the device for blue light dosimetry and multispectral measurements in the UVR, blue and infrared (IR) regions of the spectrum, with proof-of-principle applications in field trials completed in this work. 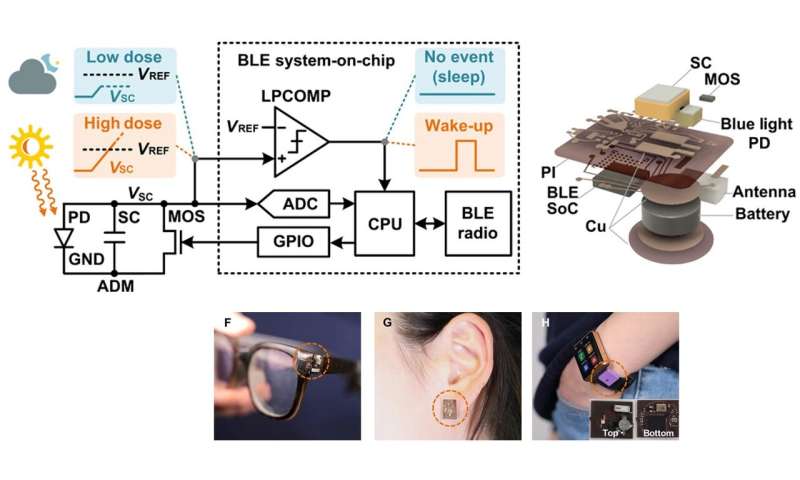 The scientists explored the unique design features of blue light dosimetry with an estimated device operating lifetime of 1-2 years. They included a photodiode (PD), supercapacitor (SC) and metal oxide semiconductor field-effect transistor (MOSFET) within the ADM. Using the PD, Kwon et al. continuously and passively generated photocurrents with a magnitude directly and linearly proportional to the intensity of exposed light. They arranged the SC in parallel with the PD to capture and store the resulting accumulated charge. They prevented excessive charge build up on the SC by connecting a gate of the MOSFET to a general-purpose input/output (GPIO) for programmable control of the current flow between the source and the drain of the MOSFET to trigger SC discharge.

Kwon et al. preprogrammed the reference voltage (VREF), where the device remained in sleep mode unless conditions exceeded values to reduce average current consumption. The wake-up frequency of the setup increased with increasing irradiation in the wavelength range. The team programmed the dosage data into the memory of the BLE SoC (Bluetooth Low Energy System on a Chip) to prevent unexpected data loss due to wireless connection disruption. Kwon et al. used thin copper-based polyimide sheets processed with a laser cutting tool to engineer the device. The battery determined the size and weight of the resulting product and its operating lifetime. The scientists deployed miniaturized forms of the device on sunglass clips, earrings and wristbands for personalized EMR exposure detection. 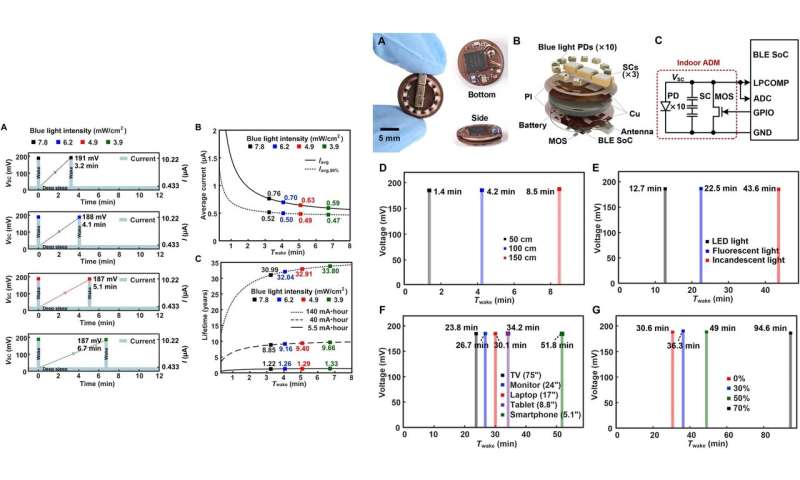 The team first designed blue light dosimeters for outdoor use. For runtime after wake-up events, the team took three time frames into consideration, which included TADC (time required for the ADC input voltage), TBLE (time to transmit the sampled data via BLE) and TDSC (preprogrammed time to fully discharge the SC), for a total of 6.56 seconds. They used on-chip data retention strategies to prevent data loss, where the BLE SoC maintained a 4-kilobyte static random access memory (SRAM). Kwon et al. programmed the device to store at least 10 measurements in the SRAM to transmit the entire dataset upon each wake-up event, when the phone was within communication range of the device.

The research team also developed blue light dosimeters for use indoors, since artificial lights and displays emit blue light to cause health risks after prolonged exposure. The setup was similar to outdoor dosimeters, with a higher collection of PDs (photodiodes) and SCs (supercapacitors) to increase the photocurrent and decrease storage capacity for increased sensitivity of the setup. The team obtained representative results from exposure to a variety of indoor light sources. The largest screen display belonged to the television, which emitted the most amount of blue light and smallest screen display to the smartphone radiating the least amount of blue light. The scientists used a commercial anti-blue light film in the experiments, which blocked approximately 17.5 percent of the radiation near 390 nm.

Kwon et al. subsequently constructed blue light dosimeters to simultaneously track exposure indoors and outdoors via an automated, wireless scheme that switched between parallel sensing circuits based on the presence (outdoors) or absence (indoors) of UVA radiation. The system updated the one-bit flag value at every wake-up event (indicating zero for indoor and one for outdoor exposure), passed the information to the user interface to activate indoor/outdoor ADM and re-enter sleep mode. The scientists assessed the most significant bit of the data obtained to calculate the exposure indoors and outdoors. 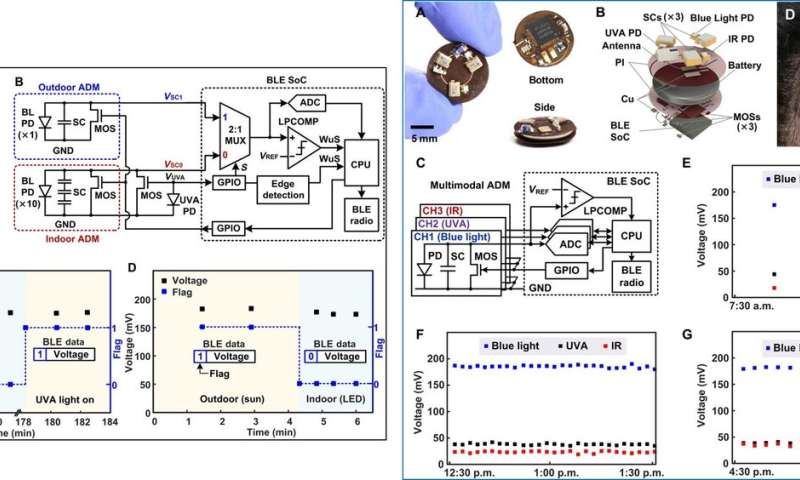 The team also developed a multichannel dosimeter for wavelengths in the UVA, blue and IR regions of the solar spectrum. They expanded the underlying designs and operating principles for simultaneous dosimetry of up to seven different wavelengths across the solar spectrum from UV to VIS and IR. Kwon et al. used a three-channel device to measure exposure dose and wirelessly transmit the data collected under specific conditions to a smartphone.