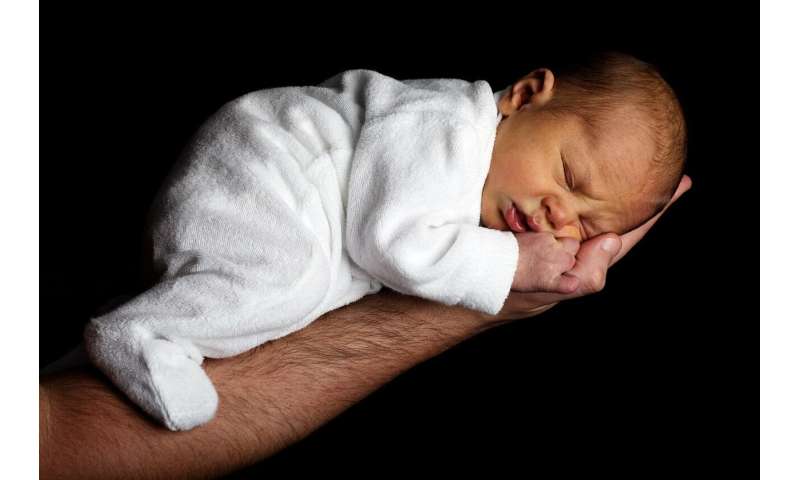 Less physical activity for infants below one year of age may lead to more fat accumulation which in turn may predispose them to obesity later in life, suggests a study led by researchers at the Johns Hopkins Bloomberg School of Public Health.

In the study, published January 16 in the journal Obesity, researchers tracked the physical activity levels of 506 infants using small ankle-worn accelerometers for four days per tracking period at ages 3, 6, 9, and 12 months. For each tracking period after 3, average physical activity increased by about four percent, in line with infants becoming generally more mobile and active over the course of their first year. Among infants, higher physical activity measured by the accelerometer was associated with lower central adiposity, a measure of lower-torso fat accumulation.

“This is the first study to demonstrate an association over time between higher levels of objectively measured physical activity and lower central adiposity in infancy,” says study lead author Sara Benjamin-Neelon, Ph.D., JD, associate professor in the Department of Health, Behavior and Society and the Helaine and Sidney Lerner Professor of Public Health Promotion at the Bloomberg School.

There is evidence that infants who gain weight more rapidly in the first months of life are more likely to have obesity years later in middle childhood. About 40 percent of adults in the U.S.—more than 90 million people—are obese, up from 15 percent in 1970. Obesity brings a greater risk of diabetes, heart disease, certain cancers, autoimmune disorders, and many other ailments. Scientists suspect rising obesity rates are linked to higher-calorie diets and lower rates of physical activity, and that both can start promoting obesity in early life.

“Some evidence suggests that the earlier you can get infants crawling and walking, and providing them with opportunities to move freely throughout the day, the more you can help protect them against later obesity,” says Benjamin-Neelon.

The study was part of a larger study of infant growth and obesity, called the Nurture study, which covered 666 mothers and their infants from the greater Durham, North Carolina, area during 2013 to 2016. Of this group, Benjamin-Neelon and her colleagues were able to get adequate accelerometer data for 506 infants. More than two thirds of the infants in the study were black, an underrepresented group in U.S.-based birth cohorts. Rates of obesity have been increasing faster among black children—as well as Native American and Latino children—compared to white children.

Studying infant physical activity levels has challenges. Accelerometers that track infant movement, much like Fitbits that adults wear, can in principle provide objective measures of activity, and have been used successfully in research on toddlers and preschoolers. For infants, movements that are initiated by a parent, such as carrying the infant, can complicate the data. The accelerometer measures all movement—regardless of whether it is initiated by infants or caregivers moving infants. Still, the results of the new study, the largest ever to use accelerometers to track infant activity over time, suggest that it is possible to overcome this limitation.

“We know that as infants grow older and start crawling and walking, their physical activity levels increase, and we saw such increases in our study—which makes me think there’s some validity to the use of accelerometers for infants,” Benjamin-Neelon says.

She and her colleagues found that among the infants in the study, an increase in recorded activity by one “standard deviation”—essentially a standard proportion of the range of the data—was associated with a small but significant decrease in central adiposity. The latter is a skinfold-thickness-based measurement that relates to abdominal fat levels and is thought to be a relatively good measure of obesity-related fat accumulation.

Benjamin-Neelon notes that larger, longer-term studies will be necessary to determine the sustained effect of infant physical activity, but that preventing extended periods of inactivity for infants will almost certainly be good for them.

“Even in infancy it’s important for children to move freely,” she says. “These days, infants are spending more and more sedentary time in car seats, high chairs, strollers—and perhaps we haven’t thought enough about the developmental ramifications of these types of restrictive devices.”

Letting infants move freely on a floor or in a crib is one solution, but Benjamin-Neelon emphasizes that it is also important for parents to create situations that nudge infants to develop more advanced motor skills, such as helping them grasp an adult’s hands or other support in order to stand up—as well as the “tummy time” that promotes the development of neck and other upper-body muscles.

“Pediatricians have told me they’ve noticed anecdotally that infants appear to be developing less upper body strength than in the past, in part due to less time spent on their tummies,” she says.