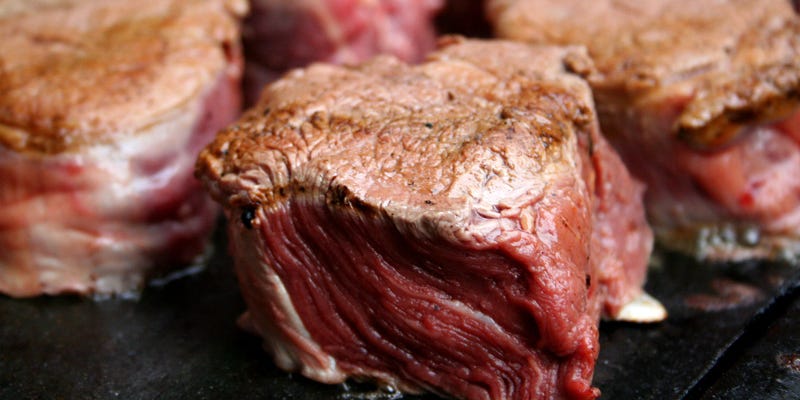 Comedian Joe Rogan doesn't shy away from controversy, using his wildly popular podcast to air conspiracy theories, questionable comments, and other divisive content. Last month, Rogan made himself a contentious talking point by pushing his own diet to the extreme, committing to 30 days of eating only meat, without carbs, veggies, fruits, or anything else.

Rogan decided to embark on the dietary experiment after previously interviewing controversial psychologist Jordan Peterson who, along with his daughter, claimed the carnivore diet could boost health.

But despite high profile advocates like Peterson, and former orthopedic surgeon Shawn Baker, the carnivore diet has been critiqued for severely limiting nutrients, and cutting out a wealth of foods known to be beneficial for human health.

A typical day of eating on the carnivore diet included two meals a day, according to Rogan's Instagram. Breakfast included six eggs or a steak, and for dinner, he would eat another steak, either beef or elk, and occasionally other types of wild game such as bison.

So, two things are going on; one, is that @bertkreischer @seguratom @arishaffir and I are going to do a weight loss podcast at the end of February, and we’re working out the details now but we’re getting body composition scales and we’re going to all go on diets and exercise a lot to see what kind of results we can get in 8 weeks. We all were pretty disgusted with how fat we were when Ari shamed us into getting on a scale during the last podcast (except for Ari, who actually looked pretty good). I weighed 205 which is about as fat as I’ve ever been and my goal is to get down to around 190. The second thing is that for the whole month of January I’m going on a strict carnivore diet. January is #worldcarnivoremonth and I figured, fuck it, let’s see what happens. So as an experiment for the entire month of January I’m not eating anything but meat and eggs. I’m getting my bloodwork done on Monday and then again when I’m done with the diet but I’ve been on it now for about 5 days and I’m already looking leaner. My energy level has been excellent too. Kind of shockingly good. I’m making sure this isn’t a temporary placebo effect but at least for now I’m definitely experiencing some benefits. Many of you know I mostly eat wild game which is very lean, so I’m supplementing that with beef tallow and some other fattier cuts of meat like this bison ribeye I just took out of the @traegergrills.

By the end of the diet, Rogan posted that he lost a total of 12 pounds and felt amazing.

"Lots of aches and pains went away, and I have improvements in my vitiligo [a chronic skin condition]," he posted on Instagram.

Anecdotally, many others on the carnivore diet or similar meat-based nutrition plans have shared similar stories of weight loss and mental clarity under hashtags like "meat heals" on Twitter and Instagram.

But there's no scientific evidence to back up those claims. In fact, most nutritionists advise against cutting out whole food groups, particularly vegetables, which are a rich source of nutrients.

"This diet is absolutely ridiculous," specialist dietitian Nichola Ludlam-Raine previously told Insider. "It's massively devoid in nutrients, carbs, and fiber which will most likely leave you feeling lacking in energy."

He suffered severe digestive distress in the form of diarrhea

Even Rogan's otherwise positive review of the carnivore diet wasn't without a caveat. He was blunt and detailed about his issues with digestion during his first few weeks of eating only meat, when he reportedly dealt with severe and frequent bouts of diarrhea.

Rogan treated his Instagram followers to a graphic description of his gastrointestinal distress.

"I haven't sh-t my pants yet, but I've come to accept that if I keep going with this diet it's just a matter of time before we lose a battle," he posted, with a picture of his dinner of liver and bacon.

Carnivore diet update; the good and the bad. Let’s start with the bad. There’s really only one “bad” thing, and that thing is diarrhea. I’m not sure diarrhea is an accurate word for it, like I don’t think a shark is technically a fish. It’s a different thing, and with regular diarrhea I would compare it to a fire you see coming a block or two away and you have the time to make an escape, whereas this carnivore diet is like out of nowhere the fire is coming through the cracks, your doorknob is red hot, and all hope is lost. I haven’t shit my pants yet, but I’ve come to accept that if I keep going with this diet it’s just a matter of time before we lose a battle, and I fill my undies like a rainforest mudslide overtaking a mountain road. It’s that bad. It seems to be getting a little better every day, so there’s that to look forward to, but as of today I trust my butthole about as much as I trust a shifty neighbor with a heavy Russian accent that asks a lot of personal questions. The good: Now, I’m well aware of the placebo effect and I’m constantly self-analyzing every perceived reaction I’m having to eating only meat for almost 2 weeks straight, but one thing I’m fairly sure of is that my energy levels are higher and steadier throughout the day. This seems undeniable. I don’t know if it’s a temporary effect and if maybe it’s just the result of eating really disciplined, but either way it seems to be real. I’ve also felt really “healthy” (other than the sporadic bouts of hellacious projectile doodoo). Again, I don’t now if this is real or imagined, but I actually seem to feel happier and more balanced. This is the only time in my life I’ve ever tried eliminating carbs for more than a day or so, and since I started the diet a couple days before January I’m now about 13 days in, at least 7 pounds lighter, and in completely uncharted territory for me. Which makes me think this is probably completely uncharted territory for 99% of the people on earth. Anyway, I’ll keep you folks posted. This is my late night dinner of liver and bacon. Only my second meal of the day, I ate a fat ribeye at 1pm. #worldcarnivoremonth

This side effect reportedly went away after the first two weeks, Rogan said.

Rogan's stomach troubles on the all-meat diet were likely linked to an important nutrient found in veggies, grains and other plant-based foods — fiber.

Fiber is a type of carbohydrate the body can't digest, but it's important for regulating digestion, helping moderate blood sugar when you eat, and other important functions.

Proponents of the carnivore diet argue that meat is one of the most nutritious foods on the planet, and can provide all necessary vitamins and nutrients. It's true that animal products like organ meats can be a rich source of vitamins.

But they don't contain the fiber necessary for good digestion and a strong microbiome. A low-fiber diet has consistently been linked to higher risk of disease like cancer, diabetes and heart problems, according to research.

And besides fiber, fresh fruits and veggies also contain micronutrients and other compounds that evidence has found are protective against disease.

"There is no body of evidence that suggests that vegetables cause illness," registered dietitian Heidi Bates said in a recent post from McGill University's Office for Science and Society, as Insider previously reported. "In fact, the opposite is true. There is an excess of evidence linking vegetable consumption to reductions in the risk for heart disease, stroke, diabetes, obesity and certain types of cancer."

Nutrition myths that we stopped believing in 2019, including the carnivore diet and 'superfoods'

'Intuitive eating' is on the rise, and experts say it's because people are fed up with diet culture