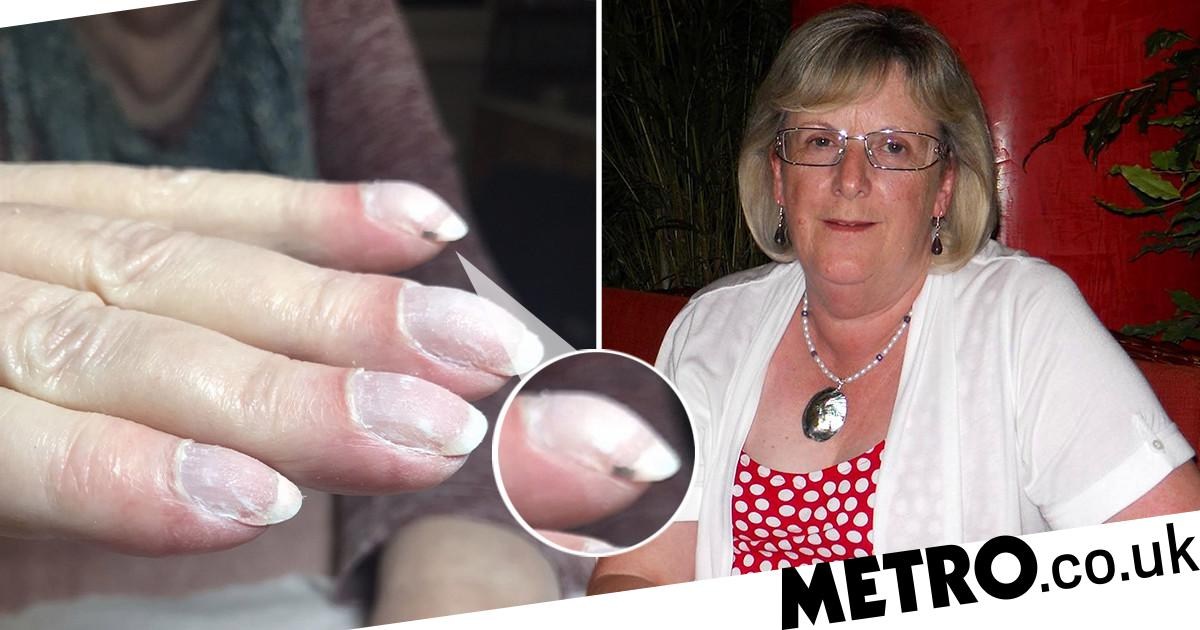 When Joan Martindale noticed her fingernails and toenails getting wider, more bulbous, and starting to curve, she dismissed the changes as no big deal.

It wasn’t until her manicurist of ten years raised alarm bells that she finally sought medical advice – and discovered her curved nails were a sign of lung cancer.

The 73-year-old grandma ended up being diagnosed with squamos cell carcinoma and had to undergo a five-hour operation to remove a 4mm tumour.

She credits her monthly manicure with saving her life, and is now sharing her story to raise awarness of this lesser-known sign of cancer.

Joan, from Tutbury, Staffordshire, said: ‘Going for a manicure saved my life. It was incredible she could pick it up from just looking at my nails.

‘I’ve told her I shall be eternally grateful to her. When we’ve got rid of this Covid we’re going for a big slap-up meal.’

Joan, who kicked a 20-a-day cigarette habit and switched to vaping back in 2013, started experiencing unusual symptoms just after Christmas in 2019.

Her ankles and feet swelled, which doctors initially thought was due to water retention, and both her toenails and finger nails changed size and shape.

Joan remembered reading about clubbed nails being an indicator of illness, but brushed off concerns and went about her life as normal.

Then on 13 March, she went to see her manicurist of ten years, Linda Bertram, who noticed her nails were ‘bent right over’ and begged her to seek medical advice.

‘I noticed my toenails got wide and bulbous on my big toes,’ says Joan. ‘I don’t usually look on Google but I was curious and it said it could be something to do with heart or lung cancer.

‘Touch wood, for my age, the doctors have said I’m in good health so I did think “Oh no, it’s not me, I’ll wait a little bit longer”.

‘Then when I went to have my nails done in March Linda asked if I was alright.

How your nails can be a sign of lung cancer

Finger clubbing, also known as digital clubbing or Hippocratic fingers, is a phrase used to describe specific changes to the shape of the fingers and fingernails. It can be a sign of various diseases, including lung cancer.

It happens in stages:

Finger clubbing is unusual, so if you notice it happening it’s important to talk to your GP as soon as possible.

‘I mentioned the swelling in my ankles and then she said she didn’t want to upset me, but that she thought there was something wrong with my nails and that they needed to be looked at by a doctor.’

The following Monday, Joan booked a GP’s appointment and got a chest x-ray done at Queen’s Hospital Burton in Burton-on-Trent.

After a number of tests, Joan was told she had a tumour on her lung.

Joan also had some lymph nodes removed that came back clear, something she hopes is a sign the cancer hasn’t spread further, and is now undergoing chemotherapy to blast any remaining cancer cells.

Despite the shock diagnosis and the surgery, gran-of-two Joan said she feels ‘lucky’ it was caught and treated quickly, especially during lockdown.

Joan said: ‘I’ve got such a positive attitude and I kept thinking “I’ve got to go through all this because I want to see my grandchildren grow up”.

‘I’ve always been an optimist and just keep thinking I’ve been so lucky for it to be diagnosed and all sorted so quickly.

‘It was a bit rough lying for five hours on my side with my arms stretched above my head, but the surgeon and the team were absolutely brilliant.

‘I’m just keeping my fingers crossed now that it’s gone away. I haven’t vaped since the operation.’

Joan reckons she might have gone to the doctor about her bent nails at some point, but would have put it off for longer in lockdown had Linda not urged her to seek help.

‘I’ll be eternally grateful to Linda because she really gave me the nudge and told me I needed to do something about it,’ she said.

‘This symptom needs to be known about so conditions can be diagnosed early – the more people know about it the better.’

Beauty therapist and nail technician Linda Bartram said she was taken aback when she saw how Joan’s nails had changed in the course of a month.

Linda, 59, said: ‘At Joan’s previous appointment I had noticed her nails were starting to just slightly bend over.

‘On the day I mentioned it they’d bent right over. I can remember when I did anatomy and physiology nearly 20 years ago and was taught nails tell you so much.

‘I remembered it when I saw Joan’s nails and remember saying ‘I don’t want to alarm you, Joan, but you need to get the doctor to look at your nails’.

‘Then the ball rolled very fast, and thank goodness it did.

‘I love Joan, she’s been a client for a long time, she’s just incredible, and we’ve got a great relationship.’