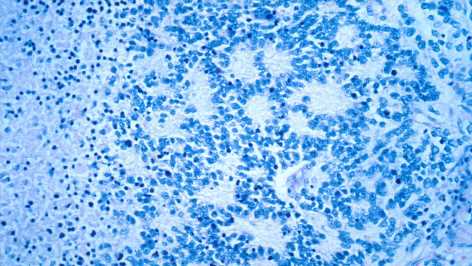 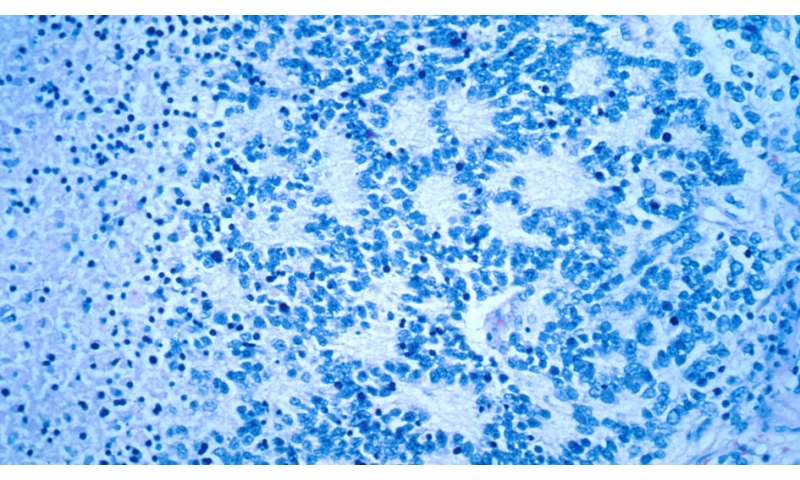 A type of drug known as a PARP inhibitor, already used to treat breast and ovarian cancer, may be useful in treating children with high-risk neuroblastoma—a common childhood tumor with a low survival rate.

Neuroblastoma is a cancer in children which arises from nerve cells in either the chest or the abdomen. In some neuroblastoma cases there is an abnormal gene called MYCN that makes it particularly difficult to treat.

Currently, children receive intense chemotherapy, radiotherapy and surgery but despite this only about half of children with high-risk neuroblastoma will survive.

Researchers at Sheffield University collaborated with The Institute of Cancer Research, London, to conduct research to find a new, more effective and less toxic way to target high-risk neuroblastoma tumors with increased levels of MYCN.

MYCN affects how tumor cells grow and makes them more dependent on a protein called PARP for survival. This means that the tumor cells are specifically killed by a drug that stops PARP working. An advantage to this type of therapy is that normal non-tumor cells are not harmed so the damaging side-effects often seen with chemotherapy are reduced.

The study, funded by childhood cancer research charity Children with Cancer UK, was led by Dr. Helen Bryant and Dr. David King in Sheffield, in collaboration with Professor Louis Chesler at The Institute of Cancer Research (ICR).

They found that the use of PARP inhibitors alone, and alongside chemotherapy, was effective in killing neuroblastoma cells, leaving behind healthy cells. This is one of the first studies to show this in neuroblastoma cells and in tumor models.

“We have shown that PARP inhibitors kill neuroblastoma cells with MYCN in the laboratory. The next step is to see whether they are beneficial in children with neuroblastoma, probably in combination with chemotherapy or radiotherapy. This would be done in a clinical trial.”

“Our study has examined the way DNA is damaged and repaired—one of the features common in all cancers is that there are changes in that process. We were interested in how that process changes in neuroblastoma and whether we can exploit those changes to specifically kill cancer cells and leave the normal cells around the tumor unharmed. In this way we hope to develop kinder and less toxic therapies for children. PARP inhibitors are being used successfully in women with breast and ovarian cancer so we are optimistic that this can be translated fairly quickly into children with neuroblastoma.”

“Neuroblastoma is one of the most common childhood tumors with around 100 children, mostly under five years old, diagnosed every year in the UK. Yet it also has one of the lowest survival rates—in its high-risk form the survival rate is sadly around just 50%. It remains one of the most difficult childhood cancers to cure. It is crucial that we find more effective and personalized treatments for children with neuroblastoma. The findings of Dr. Bryant, Dr. King and the teams in Sheffield and London represent an important step towards the development of new and kinder treatments that reduce the burden of toxicity for young cancer patients and improve survival rates in this aggressive and hard-to-treat cancer.”

Alice Latham, 3, from Derbyshire, was diagnosed with high-risk neuroblastoma, with the MYCN gene, a week before her second birthday in January 2019. Her parents, Jamie and Helena, explain the harmful side-effects of Alice’s treatment.

“Alice’s neuroblastoma treatment has been very aggressive and harsh on her body, she has experienced many side effects, including hair and weight loss. The treatment may also have an impact on her later in life—she may not grow to her full height and there is a chance she may not be able to carry children. If treatments could be developed that are less harmful to children’s growing bodies that would be incredible,” said Helena.