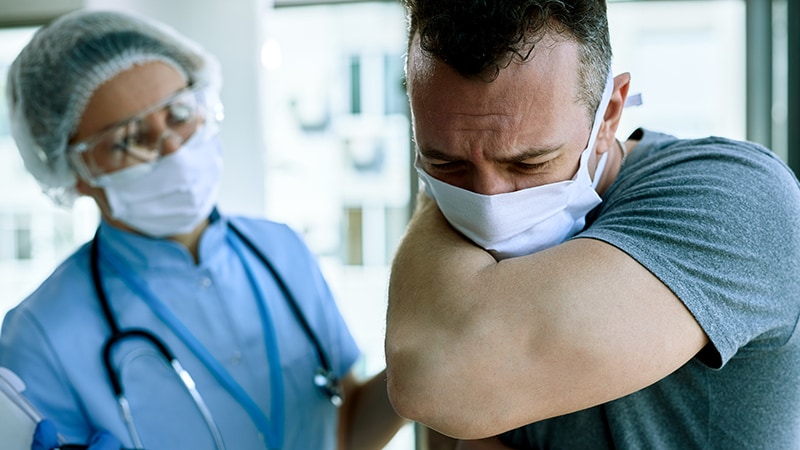 People who are seen after a patient with an influenzalike illness are 31.8% more likely to return to their doctor’s office within 2 weeks with similar symptoms, new research shows.

Prior research has examined the issue of hospital-acquired infections. A 2014 study published in the New England Journal of Medicine, for example, found that 4% of hospitalized patients acquired a health care–associated infection during their stay. Furthermore, the Centers for Disease Control and Prevention estimates that, on any given day, one in 31 hospital patients has at least one health care–associated infection. However, researchers for the new study, published in Health Affairs, said evidence about the risk of acquiring respiratory viral infections in medical office settings is limited.

“Hospital-acquired infections has been a problem for a while,” study author Hannah Neprash, PhD, of the department of health policy and management at the University of Minnesota School of Public Health, Minneapolis, said in an interview. “However, there’s never been a similar study of whether a similar phenomenon happens in physician offices. This is especially relevant now when we’re dealing with respiratory infections.”

For the new study, Neprash and her colleagues analyzed deidentified billing and scheduling data from 2016-2017 for 105,462,600 outpatient visits that occurred at 6,709 office-based primary care practices. They used the World Health Organization case definition for influenzalike illness “to capture cases in which the physician may suspect this illness even if a specific diagnosis code was not present.” Their control conditions included exposure to urinary tract infections and back pain.

Researchers quantified whether exposed patients were more likely to return with a similar illness in the next 2 weeks, compared with nonexposed patients seen earlier in the day

They found that 2.7 patients per 1,000 returned within 2 weeks with an influenzalike illness.

The authors of the paper said their new research highlights the importance of infection control in health care settings, including outpatient offices.

Where Did the Exposure Occur?

Diego Hijano, MD, MSc, pediatric infectious disease specialist at St. Jude’s Children’s Research Hospital, Memphis, Tenn., said he was not surprised by the findings, but noted that it’s hard to say if the exposure to influenzalike illnesses happened in the office or in the community.

“If you start to see individuals with influenza in your office it’s because [there’s influenza] in the community,” Hijano explained. “So that means that you will have more patients coming in with influenza.”

To reduce the transmission of infections, Neprash suggested that doctors’ offices follow the CDC guidelines for indoor conduct, which include masking, washing hands, and “taking appropriate infection control measures.”

So potentially masking within offices is a way to minimize transmission between whatever people are there to be seen when it’s contagious, Neprash said.

“Telehealth really took off in 2020 and it’s unclear what the state of telehealth will be going forward. [These findings] suggest that there’s a patient safety argument for continuing to enable primary care physicians to provide visits either by phone or by video,” he added.

Neprash suggested that another driver of these transmissions could be doctors not washing their hands, which is a “notorious issue,” and Hijano agreed with that statement.

“We did know that the hands of physicians and nurses and care providers are the main driver of infections in the health care setting,” Hijano explained. “I mean, washing your hands properly between encounters is the single best way that any given health care provider can prevent the spread of infections.”

“We have a unique opportunity with COVID-19 to change how these clinics are operating now,” Hijano said. “Many clinics are actually asking patients to call ahead of time if you have symptoms of a respiratory illness that could be contagious, and those who are not are still mandating the use of mask and physical distance in the waiting areas and limiting the amount of number of patients in any given hour. So I think that those are really big practices that would kind of make an impact in respiratory illness in terms of decreasing transmission in clinics.”

The authors, who had no conflicts of interest said their hope is that their study will help inform policy for reopening outpatient care settings. Hijano, who was not involved in the study also had no conflicts.