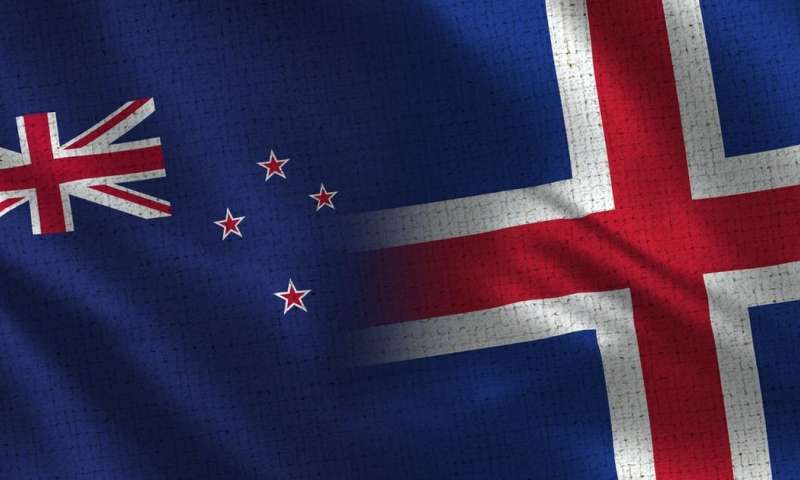 Despite being at opposite ends of the Earth, Iceland and New Zealand have many similarities. Both are small island nations, heavily reliant on tourism and currently led by young female prime ministers.

Both countries have also been commended for their responses to the COVID-19 pandemic, characterized by science-informed policy and a high degree of public trust.

Both have been rated in the top 14 safest countries in the world for COVID-19.

But since the first cases were identified in each country in late February 2020, the two nations have taken different pathways in their COVID-19 responses. What lessons can we learn from their journeys so far?

New Zealand is one of the few countries to openly declare a COVID-19 elimination strategy. This involved a progressively strengthened contact-tracing and isolation system, with early and stringent use of shutdowns and border controls.

A nationwide shutdown was instigated on March 26 soon after community transmission was first demonstrated in the country and before any deaths had occurred. Alongside the shutdown, the border was closed to all but New Zealand citizens and residents.

A 14-day quarantine in managed facilities was implemented for all new arrivals. These border controls have continued to today despite the huge impact on the tourism industry.

New Zealand’s “go hard and go early” strategy proved to be more effective than most had anticipated. The country moved back to its lowest alert level on June 8, after only seven weeks of shutdown.

On August 11, after more than 100 days with no community transmission of COVID-19, a cluster of cases not linked to other known case was detected in Auckland. This outbreak is still being contained and no source has yet been identified.

The response from the government was immediately to reinstate stay-at-home orders in Auckland, raise the alert level for the rest of the country, and further tighten systems at the border and in quarantine and isolation facilities.

Key to management of this resurgence was the use of rapid genome sequencing and a new requirement for mask use when traveling on public transport.

In contrast to New Zealand, Iceland’s strategy involved no shutdown period, no official border closure to non-residents, and negligible use of managed quarantine facilities.

The aim instead is to mitigate infection so it does not overwhelm the health-care system, and to keep the numbers as low as possible. As in New Zealand, there is a new requirement for wearing face masks when traveling on public transport and where physical distancing is difficult.

The cornerstone of Iceland’s response has been easy access to COVID-19 testing and mass screening, alongside quarantine and contact tracing. This was enabled by a public-private partnership between the Icelandic health authorities, the National University Hospital of Iceland and local biopharmaceutical company deCODE Genetics.

At one stage, Iceland was performing more tests per head of population than any other country.

As Iceland became free of community transmission of COVID-19 in mid-May, pressure grew from the tourism industry and other stakeholders to reduce the 14-day quarantine policy for new arrivals into the country.

In response, a controversial new border screening program was implemented on June 15. This required all incoming travelers to be tested once for COVID-19 on arrival and then urged to self-quarantine until results came back, usually within 24 hours.

As a consequence, tourism in June and July exceeded all expectations in Iceland.

But increasing community transmission, with several clusters arising from travelers who had tested negative on arrival prompted a stepwise tightening of the border system.

Since August 19, all incoming travelers have had to undergo mandatory self-quarantine, during which they need to return two negative COVID-19 tests at least five days apart.

The change to this two-test strategy proved to be a wise move, as 25 (20%) of the 126 active infections in inbound travelers were detected only by the second test.

As a consequence, high levels of public trust have been recorded in both Iceland and New Zealand although this has varied through the pandemic.

The prominent role of scientists, the use of multi-institutional collaborations as part of COVID-19 response strategies, and the willingness to adapt to new knowledge have also been key features for both countries.