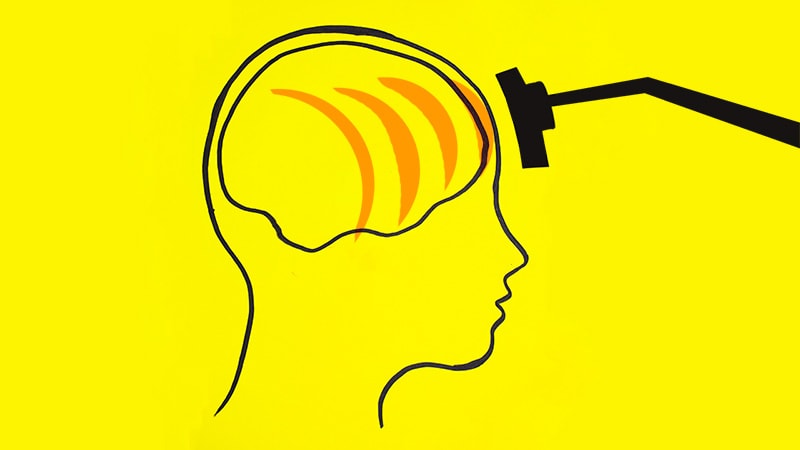 New data from the United States bolster the case for dementia prevention. At the same time, noninvasive stimulation procedures are still not being used to treat Alzheimer’s disease (AD) in day-to-day clinical practice.

Since it will still be a long time until effective antidementia medication is successfully developed, dementia researchers and health officials have emphasized the prevention of dementia diseases, in particular through increased movement, social activities, so-called healthy eating, and even through pharmacological modification of risk factors, such as high blood pressure. New study data are now supporting these efforts. Neuroscientists are also setting their hopes on noninvasive neuromodulation procedures. These procedures currently play no role in the clinical treatment of dementia, including for people with AD.

The epidemiological background for the efforts is known. The number of people suffering from dementia will continue to grow dramatically in Germany and globally if countermeasures are not taken, according to the German Neurological Society in a statement on World Alzheimer’s Day. The fact that a countermeasure is possible in principle was shown by a study from the US that calculated the number of dementia cases that could be prevented if the known, modifiable risk factors were consistently minimized.

Using California as an example, the study investigated whether the national estimates for incidence and their potential for improvement could be extrapolated to other states or regions. Data collected in the Behavioral Risk Factor Surveillance System (BRFSS) from subjects (> 18 years of age) across the entire USA (n = 378,615) and in California alone (n = 9836) were analyzed. For eight known dementia risk factors (physical inactivity, smoking, depression, low level of education, diabetes mellitus, obesity or high blood pressure in middle age, and difficulty hearing), the population-attributable risk was calculated (ie, the proportion of patients who can trace their disease back to the respective factor). An achievable reduction of 25% in the most important risk factors was assumed.

One Third of Cases

In California, around 29% of dementia cases could be attributed to a combination of risk factors. For the entire United States, the corresponding proportion was almost 37%. The three most important risk factors were poor level of education, obesity in middle age, and physical inactivity. Therefore, these three factors above all others should also be chosen as the goal for interventions, as stated in the notice from the expert society.

In contrast to dementia prevention, the therapeutic options continue to be limited or experimental, such as the noninvasive neuromodulation procedures. These approaches are particularly promising for AD, as Ronja V. Fassbender, a PhD student at the Department and Outpatient Clinic of Neurology of the University of Cologne, Cologne, Germany, and her colleagues wrote in a review published in Fortschritte der Neurologie-Psychiatrie.

In TMS, an electrical current flows through the magnetic coils placed above the cranium. The resulting magnetic impulses are emitted onto the region of the brain underneath, which induces electrical currents in the brain. Action potentials are thereby triggered in the neurons located within the stimulation field.

Studies have shown that in patients at different stages of AD, repetitive TMS (rTMS) has a positive effect on global cognition, linguistic functions, and memory functions. Furthermore, studies of the combined use of rTMS and cognitive training have consistently demonstrated improved global cognition. The positive effects are found to be retained for up to 6 months after the end of stimulation. In addition, the combination of rTMS and cognitive training appears to be better than an isolated application. However, due to the lack of control groups, caution must be exercised when interpreting the studies.

The most widespread and investigated method is tDCS, which uses a weaker, continuous current. Studies with patients at different stages of AD have demonstrated the positive effects of tDCS on episodic memory performance. It was shown in one study of 201 patients with mild cognitive impairment (MCI) that the combined application of tDCS and memory training led to significantly improved memory performance, even 8 weeks after the last intervention.

For tACS, a sinusoidal alternating current at a specific frequency is applied to the cortex to modulate endogenic neural oscillations to its amplitude or frequency. To date, there has only been one study on the effect of tACS on AD. According to the authors, a significant improvement in memory performance was observed, as well as a restoration of intracortical connectivity, evaluated as a surrogate marker of cholinergic neurotransmission, when compared with placebo stimulation.

According to the authors, TMS and tES demonstrate positive effects on the cognitive-memory capacity of patients with AD. What seems particularly promising is the modulation of endogenic neural oscillations using burst stimulation or tACS. With AD, the activity within certain frequency bands is subject to pathological changes that correlate to disease progression and decreasing cognitive capacity. Unfortunately, there are few studies on tACS or burst stimulation for AD.

Based on the differing mechanisms of action of tES and TMS, both procedures have different advantages and disadvantages. The rTMS procedure can penetrate deeper into the cranium and, due to the increased spatial and temporal specificity, allow a more controlled, more consistent, and more targeted stimulation. Another important distinction between the two procedures is that with tES, different target regions can be stimulated and inhibited simultaneously because of the use of the anode and cathode, which may enhance the stimulation effect. The tES procedures also have the advantage that they are affordable, portable, can be used at home, and can be easily combined with training or rehabilitation.

Another experimental, noninvasive procedure for treating patients with AD is transcranial pulse stimulation (TPS). Despite insufficient evidence, it is already being touted as the new, “groundbreaking” therapy method. The German Society for Clinical Neurophysiology and Functional Imaging (DGKN) recently criticized this characterization. Under the leadership of board member Ulf Ziemann, MD, medical director of neurology and codirector at the Hertie Institute for Clinical Brain Research of the University of Tübingen, Tübingen, Germany, researchers evaluated the data for TPS. “It seems premature to consider and promote TPS as the new effective form of therapy for AD or other brain conditions,” they concluded.

Researchers from the University Clinic for Neurology in Vienna, Vienna, Austria, developed TPS together with the company Storz Medical. The new therapy is thought to stimulate regeneration of the brain. According to a statement by the study authors, it is “possible for the first time in the world to use an ultrasound pulse directly on the cranial bone to penetrate all areas of the brain in a noninvasive, pain-free manner and under full consciousness, and to trigger and activate areas of the brain in a quite targeted manner.” The website of the Medical Interest Group for Alzheimer’s Disease Therapy labels the method as “effective and safe” as well as “groundbreaking.” According to the notice from the expert society, there are already more than 42 treatment locations throughout the German-speaking countries, including 33 in Germany.

TPS is an ultrasound-based, pulsed method for noninvasive stimulation of the brain. A special ultrasound probe emits a very short (30 µs) pulse of ultrasound at a typical frequency of 5 Hz. The TPS concept is based on a more-than-decade-long research project by the working group headed by Roland Beisteiner, MD, of the University Clinic for Neurology and Psychiatry at the Medical University of Vienna, Vienna, Austria. Since 2019, the research data on TPS have been published in more than six scientific publications.

According to the DGKN, four of the studies are based on investigations on one and the same small cohort of 35 subjects with possible AD. In these subjects, the TPS was applied over 2 to 4 weeks (three sessions per week, 6000 pulses/session, stimulation of individually determined regions of the Alzheimer’s network, including the dorsolateral prefrontal cortex and the default mode network).

The scientists observed significant positive effects on neurocognitive performance, which remained stable for over 3 weeks. This was measured with a standardized neuropsychological battery of tests to record cognitive deficits in patients with AD (Consortium to Establish a Registry for Alzheimer’s Disease, corrected total score). However, apart from the positive effects in the cognitive areas of memory and verbal functions, negative effects have also been observed on visuo-constructive performance, the expert society reported. Three further publications by the working group relate to secondary analyses of the data from this primary study.

According to the DGKN, multiple critics, including the self-help organization the German Alzheimer Society and scientists from various universities, are questioning the significance of the studies and the long-term effect of the new therapy. The DGKN is also critical of the new method for the following reasons:

“If you take a detailed look at the published studies, you can see that at this time, there is definitively still an insufficient amount of evidence on the efficacy of the new method,” wrote Ziemann. “Therefore, it is currently not justified to consider and promote TPS as the new effective form of therapy for AD or other brain conditions.”

Fassbender’s working group has the same outlook. “Due to the lack of control conditions such as a placebo stimulation, the small cohort, and the monocentric design, the therapeutic benefit of TPS cannot be assessed for certain at this point in time,” they wrote. Nevertheless, the various procedures for noninvasive neuromodulation are promising approaches in the treatment of early stage AD.

This article was translated from Univadis Germany.