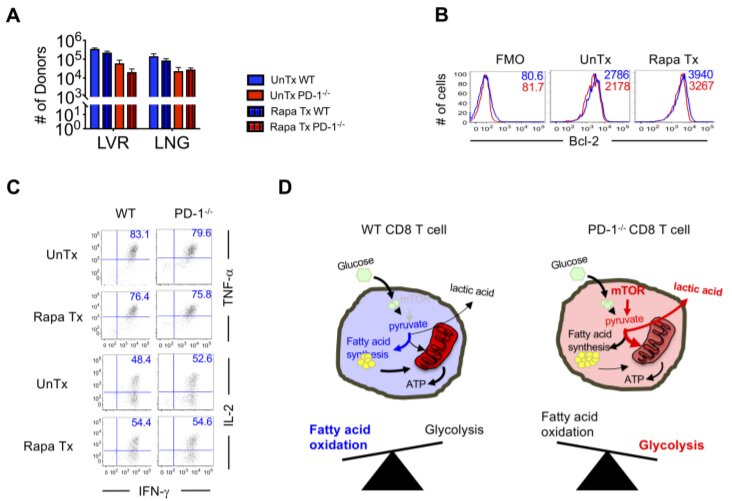 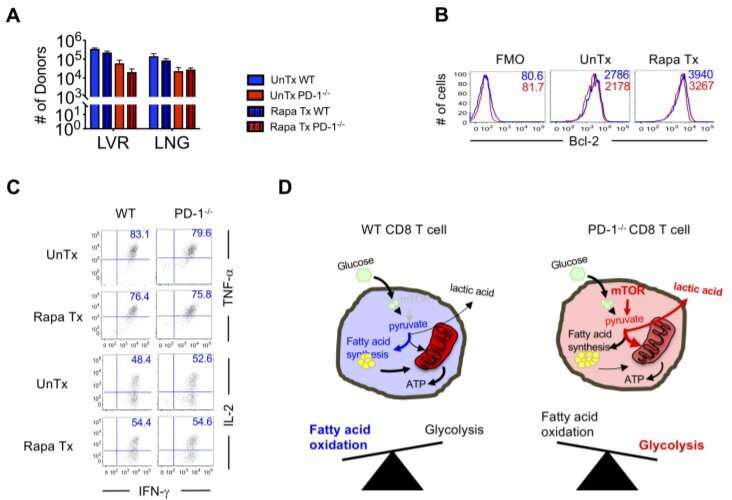 The immune system is an extraordinarily complex network made up of components that simultaneously launch attacks and mount defenses.

The army is vast and members have a range of functions—from marking enemy invaders for destruction, or gulping them down whole or dousing the infiltrators with harsh compounds in chemical warfare assaults.

Yet, T cells, members of the white blood cell army—and among the most important members of the mammalian immune system—can suffer combat stress—the cellular equivalent of shell shock. The fight against cancer or viruses can become so fierce, so all-consuming that some T cells lose their capacity “to remember,” to recall enemies that have attacked in the past. Others simply give up the ghost and die.

A critical area of immune system research focuses on the function of T cells and how to improve it. Another research path examines the unfortunate reality of T cell exhaustion, which damages their memory and depletes their numbers.

New research by scientists at several institutions in Seattle and their collaborators elsewhere in the United States is shedding light on the inhibitory protein known as programmed cell death protein 1, or more simply by the shorthand, PD-1.

CD8 T cell exhaustion is often characterized by the persistent expression of PD-1 whose presence is a feature in immune responses that occur in diseases ranging from cancer to a long list of chronic infectious diseases. CD8 is the identifying glycoprotein on the surface of cytotoxic T cells.

Dr. Vandana Kalia, principal investigator at the Ben Towne Center for Childhood Cancer Research, specializes in the study of how genes regulate T cells. In an elegant series of mouse-model studies, reported in Science Translational Medicine, she and her colleagues have investigated the impact of PD-1 signaling on memory CD8 T cells. The team found that metabolic regulation by PD-1 signaling promotes long-lived CD8 T cell memory in mice.

The findings could one day have implications for preserving immune memory in patients who are receiving anti-PD-1 immunotherapy, such as CAR T-cell cancer therapy. Disrupted T cell function can leave patients vulnerable to infections.

When PD-1 is persistently expressed in cancer or acute infections, such as HIV or hepatitis C, the protein curbs the immune response driven by CD8 T cells. Now, the largely Seattle-based team has demonstrated that, at least in in mice, a lack of PD-1 can deplete the pool of long-lived memory CD8 T cells. But metabolic modulation by PD-1 signaling promotes long-lived quiescent CD8 T cell memory in the animal model, the researchers found.

“Inhibitory signaling in dysfunctional CD8 T cells through the PD-1 axis is well established in chronic viral infections and cancers,” Kalia wrote in Science Translational Medicine. “PD-1 is also transiently induced to high concentrations during priming of acute infections and immunizations, yet its impact on the development of long-lived antigen-independent T cell memory remains unclear.

“We show that PD-1 expression on antigen-specific CD8 T cells is required for the development of a durable CD8 T cell memory pool after antigen clearance. Loss of T-cell-specific PD-1 signaling led to increased contraction and a defect in antigen-independent renewal of memory CD8 T cells in response to homeostatic cytokine signals, thus resulting in attrition of the memory pool over time,” asserted Kalia, who is also an assistant professor at the University of Washington School of Medicine in Seattle.

PD-1, as it turns out, also provides necessary molecular signaling to regulate glycolysis and fatty acid oxidation—two metabolic processes that promote the development of long-lived memory CD8 T cells—according to the research by Kalia and her collaborators.

Studies conducted by other teams are also delving into the function of T cells, and are zeroing in more specifically on the issue of T cell exhaustion.

Earlier this year, in a joint investigation involving scientists from the United States and Japan, researchers took an in-depth look at T cell exhaustion to find out why and when it occurs. Among the discoveries by researchers from the University of Pittsburgh and Asahi Kasei Pharma Corporation in Shizuoka, Japan, was isolating a key protein on the T cell surface—a transmembrane protein—that serves as a marker of T cell exhaustion. Under conditions of widespread fatigue, the transmembrane protein, named Tim-3, singularly signifies T cell exhaustion, the international team of scientists found.

Drs. Lawrence P. Kane and Shunsuke Kataoka led the group of international scientists who found the marker of T cell exhaustion and reported their findings in the journal Science Signaling.

In addition to finding a key marker of T cell exhaustion, they also proposed ways to reverse it, a research pathway that also is being pursued by scientists at Massachusetts General Hospital in Boston. They, too, are looking into possible rejuvenation of T cells damaged by persistent viral infection.