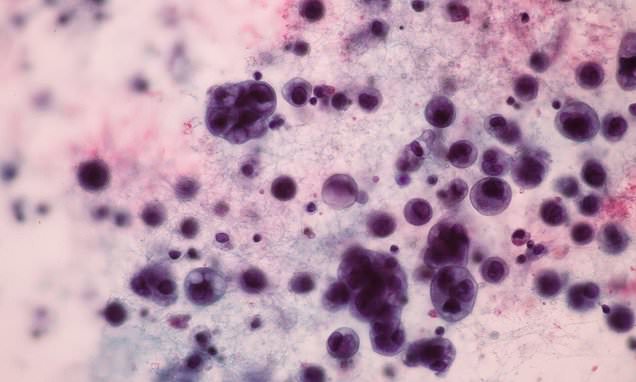 Cervical cancer rates among young women have surged as screening uptake has hit a record low, experts have warned.

Incidence of the disease among 25- to 29-year-olds increased 54 per cent in the last decade, according to Cancer Research UK analysis.

The figures – compiled from official registries in England, Scotland and Wales – comes after years of ‘stalling and stagnating’ progress on cervical cancer, the charity warned.

Although cancer rates in Britain halved between the late 1980s and mid-2000s, progress since has plateaued.

Uptake of the national screening programme – introduced in 1988 – has fallen to an all-time low, with a quarter of women failing to attend.

Experts are particularly concerned about young women, of whom just 61 per cent took up their latest screening invitation. 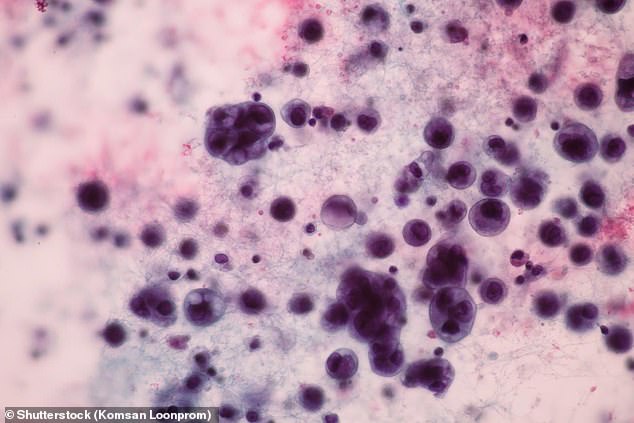 Cervical cancer can be prevented by regularly attending screening appointments, which are free on the NHS and look for abnormal cells in the cervix (Pictured: Stock image of cervical cells under a microscope)

Some 3,192 women on average are diagnosed with cervical cancer each year, with most of these in younger age groups.

Cancer Research UK said four in 10 women who do not attend put it down to embarrassment, while two in ten are worried it might hurt.

Others say they have no symptoms to get checked out or just do not feel they are at risk.

The NHS cervical screening programme invites women aged 25 and 49 for testing every three years, and every five years for those aged 50 to 64.

While the death of TV star Jade Goody in 2009 boosted the numbers of young women seeking screening, that effect has now long worn off.

Across the UK just 71 per cent took up their latest invitation.

Screening aims to spot pre-cancerous cells which can be treated before they develop into tumours that can spread throughout the body.

This involves taking a sample of cells from the neck of the womb to look for abnormalities.

Some 1,000 women die with the disease annually – but experts say another 2,000 women would be killed by the disease every year without the programme.

Cancer Research UK’s chief executive Michelle Mitchell said: ‘These figures show how research has protected thousands of people in the UK from cervical cancer, but they also highlight a worrying trend that shows progress is stalling and stagnating, which could undermine this success.

‘Cervical cancer is one of the few cancers that can be prevented through screening, and now the disease is far less common in the UK. But these life-saving programmes can’t help people they can’t reach, which is why it’s important for us to continue to raise awareness and carry out research into how screening could be improved for hard-to-reach groups.’

Robert Music, chief executive of Jo’s Cervical Cancer Trust, said that while rates are rising among young women, data for England showed an annual decline in the number of diagnoses in this age group.

He said the increasing rates were in part due to improved tests, meaning cancers are picked up at an even earlier age.

And he said the HPV vaccination – introduced in 2008 – will see rates in young women start to decrease significantly in the coming years.

‘While we know we can eliminate cervical cancer one day, we have a long way to go,’ Mr Music said.

‘Improving screening attendance and adopting innovations to make the programme even more effective must be a priority, especially among age groups who have not been offered the vaccine.’

Professor Peter Johnson, NHS clinical director for cancer, said: ‘More and more young women and men are being vaccinated against HPV, the most recent figures show an increase in people getting screened and most importantly, the number of people infected with the cancer-causing viruses has fallen dramatically.

‘Together with the new way of cervical screening which has now been rolled out across England, cervical cancer has the potential to become a thing of the past.

‘It is vital that people go for their screening test, even if they are completely well – it could be a life-saver.’

WHAT IS CERVICAL CANCER?

Cervical cancer affects the lining of the lower part of womb.

The most common symptom is unusual bleeding, such as between periods, during sex or after the menopause, but other signs can include: