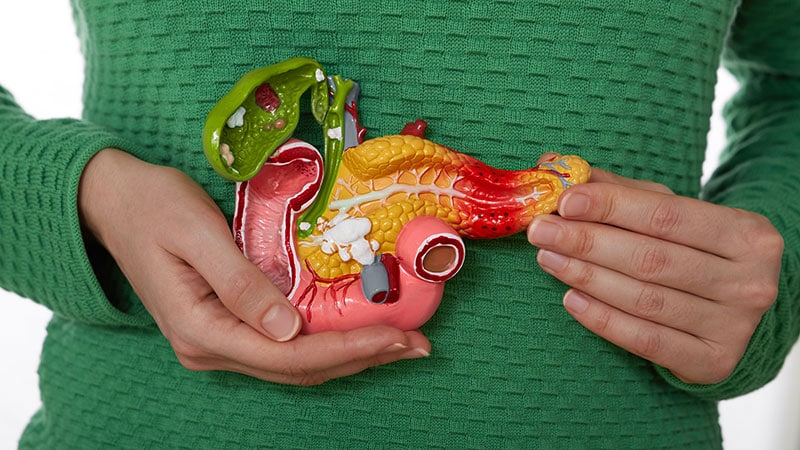 Early aggressive hydration is widely recommended for the management of acute pancreatitis, but evidence for this practice is limited.

“The WATERFALL trial demonstrates that aggressive fluid resuscitation in acute pancreatitis is not safe, it is not associated with improved outcomes, and it should be abandoned,” Enrique de-Madaria, MD, PhD, with Hospital General Universitario Dr. Balmis, Alicante, Spain, told Medscape Medical News.

The trial settles a “new and clear reference for fluid resuscitation in this frequent disease: lactated Ringer’s solution 1.5 mL/kg per hour (preceded by a 10 mL/kg bolus over 2 hours only in case of hypovolemia),” added de-Madaria, president of the Spanish Association of Gastroenterology.

“This moderate fluid resuscitation strategy is associated with a much lower frequency of fluid overload and a trend toward improved outcomes. For such reasons, it should be considered as a new standard of care in the early management of acute pancreatitis,” de-Madaria said.

The WATERFALL trial results were published today in the New England Journal of Medicine.

The results are “stunning and, given the carefully crafted trial methods, irrefutable,” Timothy Gardner, MD, with the Section of Gastroenterology and Hepatology, Dartmouth–Hitchcock Medical Center, Lebanon, New Hampshire, writes in a linked editorial.

The trial was conducted at 18 centers across India, Italy, Mexico, and Spain. Patients who presented with acute pancreatitis were randomly allocated to aggressive or moderate resuscitation with lactated Ringer’s solution.

Patients were assessed at 12, 24, 48, and 72 hours, and fluid resuscitation was adjusted according to clinical status.

The data and safety monitoring board terminated the trial at the first interim safety analysis as a result of the development of fluid overload in 20.5% of the patients in the aggressive-resuscitation group vs 6.3% of those in the moderate-resuscitation group (adjusted relative risk [RR], 2.85; 95% CI, 1.36 – 5.94; P = .004).

“An increased risk of fluid overload was detected in the overall population of patients and also in subgroups of patients without systemic inflammatory response syndrome (SIRS) at baseline, patients with SIRS at baseline (thus, with a higher risk of development of severe pancreatitis), and patients with hypovolemia,” the investigators report.

This clear signal of harm was coupled with no significant difference in the incidence of moderately severe or severe pancreatitis (22.1% in the aggressive-resuscitation group and 17.3% in the moderate-resuscitation group; adjusted RR, 1.30; 95% CI, 0.78 – 2.18; P = .32).

“These findings do not support current management guidelines, which recommend early aggressive resuscitation for the treatment of acute pancreatitis,” the study team writes.

This is a “landmark” trial and “so clinically relevant because of its choice of real world-appropriate aggressive-resuscitation and moderate-resuscitation treatment groups, its use of pancreatitis severity as the main clinical outcome, and its reliance on the carefully defined variable of fluid overload as the main safety outcome,” Gardner writes in his editorial.

“Unlike in most other randomized, controlled trials of fluid resuscitation in acute pancreatitis, patients with varying baseline pancreatitis severity were included, and changes in the rate of resuscitation were determined on the basis of a dynamic assessment of hemodynamic testing, imaging, and clinical factors,” he adds.

First, the need to focus on a steady rate of initial resuscitation — no more than 1.5 mL/kg of body weight per hour. Clinicians should administer a bolus of 10 mL/kg only if there are signs of initial hypovolemia.

Second, that careful clinical and hemodynamic monitoring are essential during the first 72 hours after admission to make sure that patients remain euvolemic and to avoid fluid overload.

Third, that diuresis in patients with fluid overload in the first 72 hours is most likely beneficial and certainly not detrimental to important clinical outcomes.

Gardner says the trial also highlights the need to focus research efforts on evaluating other pharmacologic therapies instead of crystalloid fluids.

“Performing randomized controlled trials in acute pancreatitis is notoriously difficult, and the limited human and financial resources that are available for appropriately powered trials in this field post-WATERFALL are much better spent on comparative-effectiveness and placebo-controlled trials evaluating new therapeutic agents,” Gardner says.

“Now that we have gone over the WATERFALL, it is time to look downstream at new targets to treat this challenging disease,” he concludes.

Support for the trial was provided by Instituto de Salud Carlos III, the Spanish Association of Gastroenterology, and ISABIAL (Instituto de Investigación Sanitaria y Biomédica de Alicante). Disclosures for the authors and the editorialist can be found here.